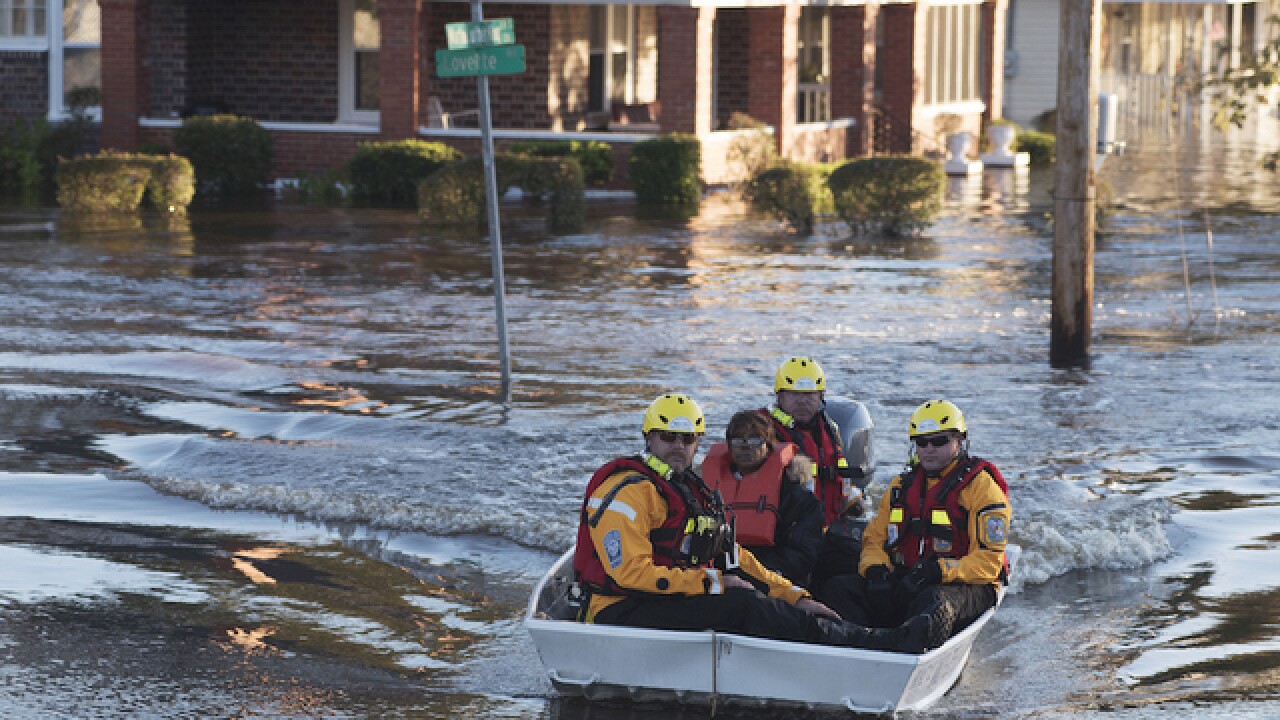 Cruising past a mortuary, grocery and homes in a flooded area of Lumberton, they joined U.S. Marshals and water rescue teams from as far away as New York and New Jersey on Monday. They were focused on rescuing about 1,500 people who were trapped when the river unexpectedly rushed out of its banks, up their stairways and into buildings.

The rescue teams returned to work Tuesday across eastern North Carolina as the deluge rolled downstream toward the Atlantic Ocean. At least three rivers were forecast to reach record levels, some not cresting until Friday.

The half-dozen men from the nearby town of Rayham spent about 10 hours Monday aboard their truck — usually used for fighting brush fires in this swampy, rural southeast corner of North Carolina. They ferried to safety the people in inflated dinghies or bass boats who met the truck on the neighborhood's main street.

"We've got it nowhere near this bad," said Jimmy Hunt Jr., son of the chief of the volunteer fire department in Rayham.

Hurricane Matthew killed more than 500 people in Haiti and at least 26 in the U.S. — more than half of them in North Carolina. At least three people were missing.

In addition to the 14 storm-related deaths in North Carolina, there were five in Florida and three each in Georgia and South Carolina. One death was reported in Virginia.

Also in Lumberton, authorities said a man was fatally shot by state trooper in confrontation amid flood waters in hard-hit Lumberton. Few details about the shooting were released. Gov. Pat McCrory would only say it happened under "very difficult circumstances."

The full extent of the disaster in North Carolina was still unclear, but it appeared that thousands of homes were damaged and more were in danger of flooding.

Officials said a dam in danger of a breach after the storm was holding, so far. Crews worked until about 2 a.m. Tuesday to add sandbags to reduce the threat at Woodlake Dam in Moore County near Vass, Deputy Public Safety Director Scott Brooks said.

Brooks said crews were returning later Tuesday morning to finish. The work would need to be inspected before residents could return home.

In many areas, Matthew's aftermath was compared to Hurricane Floyd, which did $3 billion in damage and destroyed 7,000 homes as it skirted the coast in 1999.

McCrory said thousands of animals drowned — mostly chickens on poultry farms — and he was deciding on rules for disposing of the carcasses. Floyd left behind its own environmental crisis from livestock farming, when waste from hog lagoons mixed with flood waters in a toxic mess.

But Monday, for the first time, the governor began talking about recovery, saying he would form a task force and get private businesses to help.

Most state officials were still concentrating on the crisis. They were concerned that other cities could suffer a fate similar to Lumberton, a community of 22,000 people about 80 miles from the ocean. With electricity cut off in the storm's wake, there was virtually no gasoline, water or food for sale.

The Rev. Volley Hanson worried that stress from the lack of running water and electricity might push people over the edge. Robeson County, which includes Lumberton, had North Carolina's highest violent crime rate in 2014.

"The cash is going to be running out. We've already got street vendors hawking water, Cokes and cigarettes. Cigarettes are at seven bucks a pack," Hanson said. "It's nuts here, and it's going to get worse."

The Lumber River crested 4 feet above its record level Sunday in Lumberton and was forecast to remain above the record until next Sunday.

In the tiny town of Nichols, South Carolina, downstream from Lumberton, at least 100 people spent the night on the third floor of the town hall waiting to be rescued.

Interstate 95 — a major artery for the East Coast — was closed in Lumberton and engineers could not predict when it would reopen. Driving was difficult, if not impossible because hundreds of roads were closed, in some cases isolating entire towns. Dozens of school districts and East Carolina University canceled classes for the entire week.

Authorities in coastal Georgia and South Carolina warned residents it may take days or even weeks to restore electricity and clean up the debris. People grew increasingly frustrated when they were blocked from returning home by authorities who said the damage was still too severe.

Matthew's flooding in North Carolina was worsened September's heavy rainfall. Many areas east of I-95 got at least twice their normal amount of rain in September, in part because the remnants of Tropical Storm Julia parked off the coast for several days.