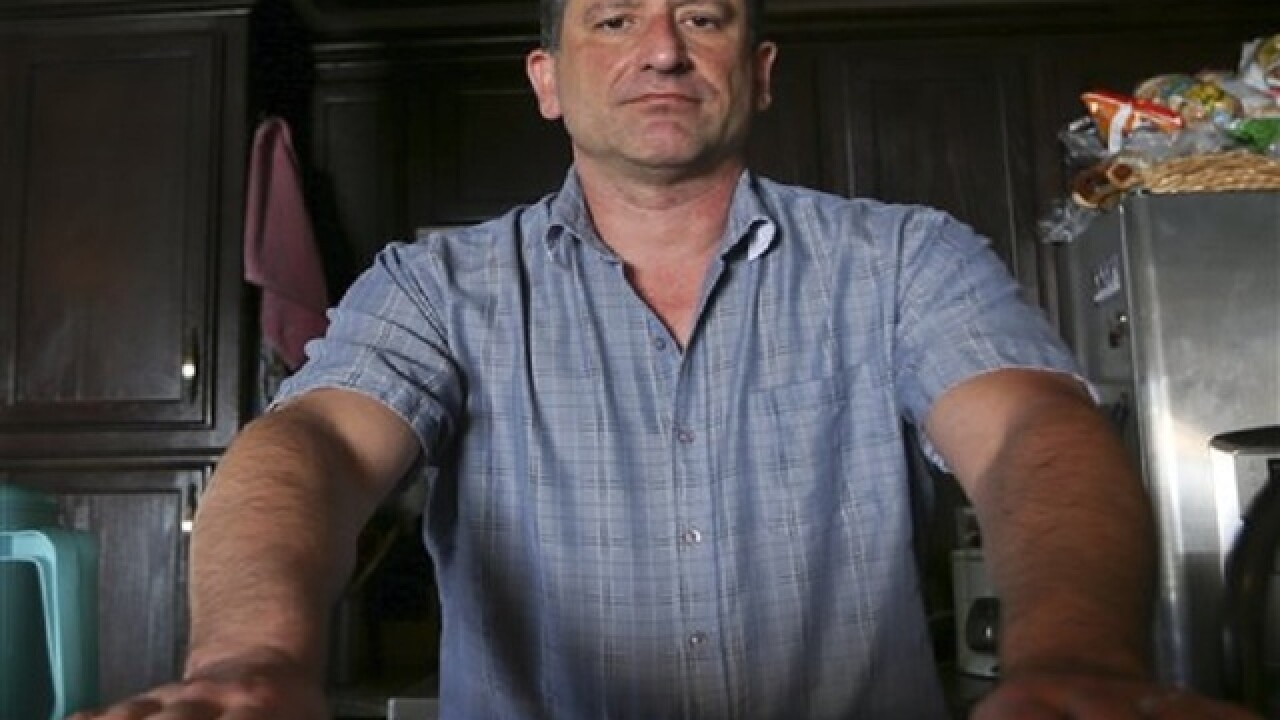 Copyright 2018 Scripps Media, Inc. All rights reserved. This material may not be published, broadcast, rewritten, or redistributed.
Lenny Ignelzi
In this photo taken March 24, 2016, Keith Gartenlaub is seen at his home in Southern California. FBI agents investigating a potential data leak at Boeing obtained a secret warrant to search the home computers of Gartenlaub, a company manager in California, for evidence they hoped would connect him to Chinese economic espionage. (AP Photo/Lenny Ignelzi)

By: Associated Press
Posted at 4:18 AM, Apr 06, 2016
WASHINGTON (AP) — FBI agents investigating a potential data leak at Boeing obtained a secret warrant to search the home computers of a company manager in California for evidence they hoped would connect him to Chinese economic espionage.
Instead, they say, they found something else entirely: graphic child pornography.
With that discovery two years ago, an investigation that began with sensational but ultimately unproven allegations of espionage veered into an unrelated child pornography prosecution that won Keith Gartenlaub's conviction in December.
Now, the Los Angeles case is testing a defendant's ability to access information about himself that had been presented to the nation's secretive intelligence court, which issued the warrant that let agents scour his computers. At issue is how the government uses evidence derived through the Foreign Intelligence Surveillance Court and under what circumstances that information should be seen by defendants, particularly when it's repurposed for a routine criminal prosecution that has nothing to do with national security.
Gartenlaub, 47, says he has a right to know the government's arguments that were used to obtain the warrant, and fight them. "You can't base a search on lies," he said in an interview with The Associated Press.
He's seeking a new trial as he awaits his April 18 sentencing, saying there's no evidence he was aware of the child pornography or had ever accessed the images. If that's denied, he's likely to appeal on grounds that the warrant to inspect his computers was based on false assumptions and allegations of a crime — espionage — for which he's never been charged.
It won't be easy. His request to suppress pornography evidence he said was improperly obtained was denied before the trial. He's tried to review the sealed FISA court records in hopes of attacking the FBI search, but the government refused and a judge said he wasn't entitled to it.
"I don't want the FISA warrant for my own personal edification. I need to know whether they provided probable cause to a judge to search a man's computers and home," said his attorney, Mark Werksman.
The FISA court, created in 1978 to hear government surveillance requests in foreign intelligence matters, remains shrouded in secrecy. Judges can theoretically order prosecutors to share FISA information with defendants if they deem it necessary for challenging a search's legality, but courts have consistently agreed with the government that disclosing the material could expose sensitive intelligence secrets. In Gartenlaub's case, then-Attorney General Eric Holder advised against disclosure.
A rare exception came in 2014, when a judge in Chicago ordered the disclosure of FISA materials in a bomb-plot case. A federal appeals court overturned the decision, and the Supreme Court declined to review it.
"For defendants, access to this information is a matter of fundamental fairness, because without it they cannot meaningfully challenge whether the government's secret searches were lawful in the first place," American Civil Liberties Union lawyer Patrick Toomey said in an email. "For the public, this information is crucial because it is the only way to know whether the law's basic protections for Americans have been watered down in practice, behind closed doors."
The Justice Department noted that the judge, Christina Snyder, already ruled that the FISA warrant was lawfully issued and the evidence properly gathered.
"When law enforcement lawfully obtains evidence of a serious crime, in this case a crime against children, we will pursue further investigation of that crime," the department said in a statement.
The FBI interviewed Gartenlaub multiple times in 2013 after a Wired.com article revealed a resemblance between a new Chinese aircraft, the Xian Y-20, and the Boeing C-17, a military cargo plane, and suggested someone within Boeing may have been responsible.
A separate FBI affidavit seeking access to Gartenlaub's Yahoo email account lays out the basis for suspicion, describing Gartenlaub as the "one engineer" who had access to C-17 data, intimate knowledge of Boeing's computer systems and family ties to China. His wife is from China with a family he'd described as "well connected," and he traveled regularly to the country and expressed frustration that Boeing sought to limit his excursions there over security concerns, the affidavit says.
A recent court filing suggested a connection to the prosecution of Su Bin, a Chinese businessman who pleaded guilty last month for his role in a Boeing hack that led to the theft of C-17 secrets.
But Gartenlaub, for his part, maintains he wasn't working on the C-17 program when the Su Bin theft is thought to have occurred and didn't have access to the data in the first place — though, he says, thousands of other Boeing employees did. He says the FBI misstated his position at Boeing, making it sound like he had broader access than he actually had.
The FBI accessed his computers early in 2014 after obtaining the FISA warrant and arrested him months later on pornography charges.
In its search the FBI says it found videos of prepubescent girls on multiple hard drives, and evidence that Gartenlaub maintained a "carefully curated and organized collection" that was copied multiple times. But Jeff Fischbach, a forensic examiner who reviewed the evidence for the defense, said there was no evidence the videos were ever opened or accessed in the years since they'd been downloaded and placed onto his computer and that other computer users may well have been responsible for the files.
"Either I'm this spy-slash-child pornographer, or I'm one of them, or I'm none of them," Gartenlaub said. "I'm telling you, I'm none of them."
Prosecutors, meanwhile, have recommended a 10-year prison term.
"Defendant," they wrote in a recent filing, "continues to deny any personal responsibility for his crimes of conviction."
Associated Press 2016