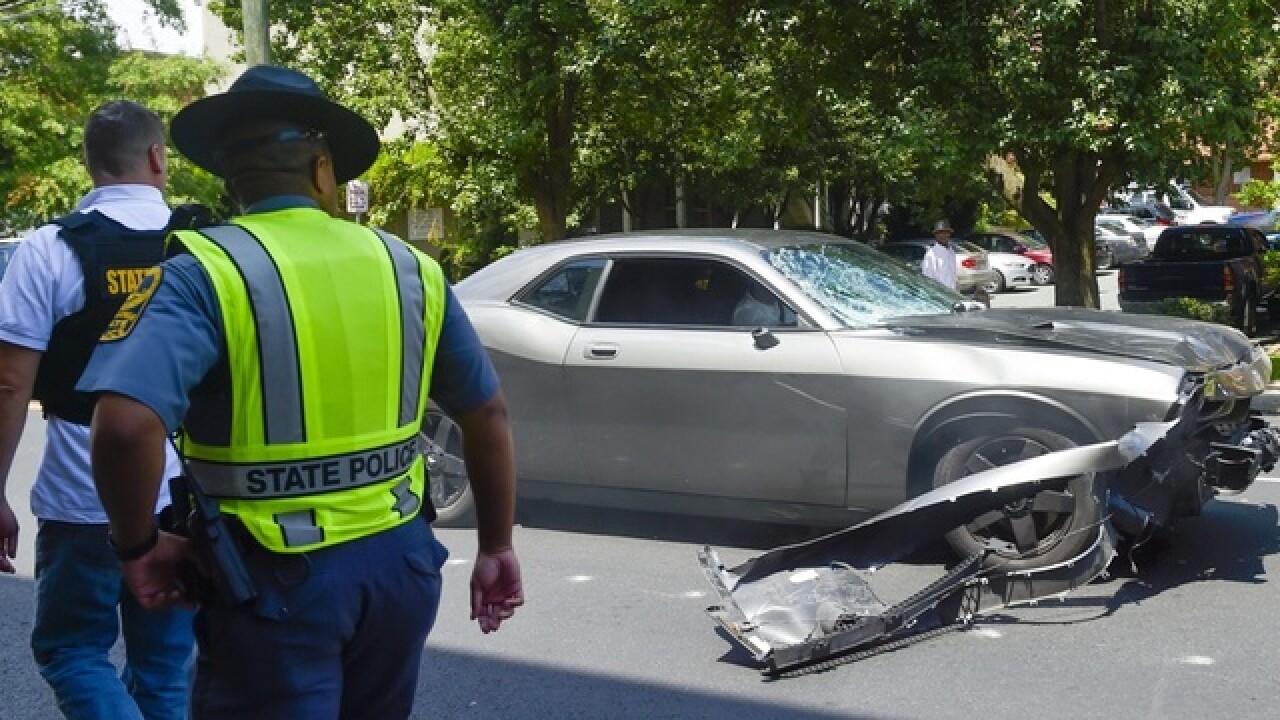 Image copyright 2017 Getty Images. All rights reserved. This material may not be published, broadcast, rewritten, or redistributed.
Matthew Hatcher/Getty Images
<p>CHARLOTTESVILLE, VA - AUGUST 12: The silver Dodge Charger alledgedly driven by James Alex Fields Jr. passes by police officers near the Market Street Parking Garage moments after driving into a crowd of counter-protesters on Water Street on August 12, 2017 in Charlottesville, Virginia. Heather Heyer, 32 years old, was killed and 19 others injured when they were struck by Fields' car.</p>

(CNN) -- Republican Rep. Tom Garrett said Saturday that he was told during a briefing with the FBI director that Russian meddling played in a role in "fomenting the flames of what happened in Charlottesville," Virginia, one year ago, when a white nationalist rally turned violent and resulted in the death of a counterprotester.

"I sat in a closed session briefing probably two months ago about Charlottesville with the director of the FBI, amongst others, and asked if Russian inter-meddling had to do with fomenting the flames of what happened in Charlottesville. I was told yes, it did," Garrett told CNN's Ryan Nobles on "Newsroom."

The congressman from Virginia said he asked during the briefing if the information was classified and was told it is not.

Garrett, a member of the House Homeland Security and Foreign Affairs committees, said that Russian interference is "seeking to pit Americans against Americans to undermine confidence in Western-style democracies."

Referring to Russia, the congressman said, "They use events like this divisive racial fight ... and this is the sort of thing they do. As a member of Homeland Security, that's what scares me most, that Americans will be pitted against Americans over real differences, but that are minimal in the grand scheme of things. We are an American family of brothers and sisters regardless of religion and race, and we need to focus on that."

The FBI did not immediately return CNN's request for comment on the congressman's remarks.

A year later, Charlottesville is again girding for violence even the "Unite The Right 2" rally has been moved to Washington, D.C., on  Sunday. States of emergency were declared this week in Virginia that enable law enforcement to access state resources, including the National Guard, if unrest breaks out at anniversary rallies.

"Along the lines of the question about Charlottesville, for example, to the extent that we have domestic terrorism in this country that is spun up by various ideologies, foreign influence is being used, in many ways, to capitalize on that and spin up domestic extremist movements to create terrorist attacks here inside," he said.

The Wall Street Journal reported last fall that Facebook accounts that appeared to be linked to Russian entities posted extreme messages, including anti-Muslim and anti-immigrant messages after the 2016 election and racially divisive messages during the white nationalist rally in Charlottesville last August.

White supremacist demonstrators and counterprotesters squared off in violent clashes. The violence culminated in the death of Heather Heyer, 32, when James Alex Fields Jr., whose social media accounts included posts espousing white supremacy, purposely drove his car into a crowd of counterprotesters.

Fields, 21, of Maumee, Ohio, pleaded not guilty last July. Fields grew up in Northern Kentucky before moving to Ohio and graduated from Cooper High School in Boone County.