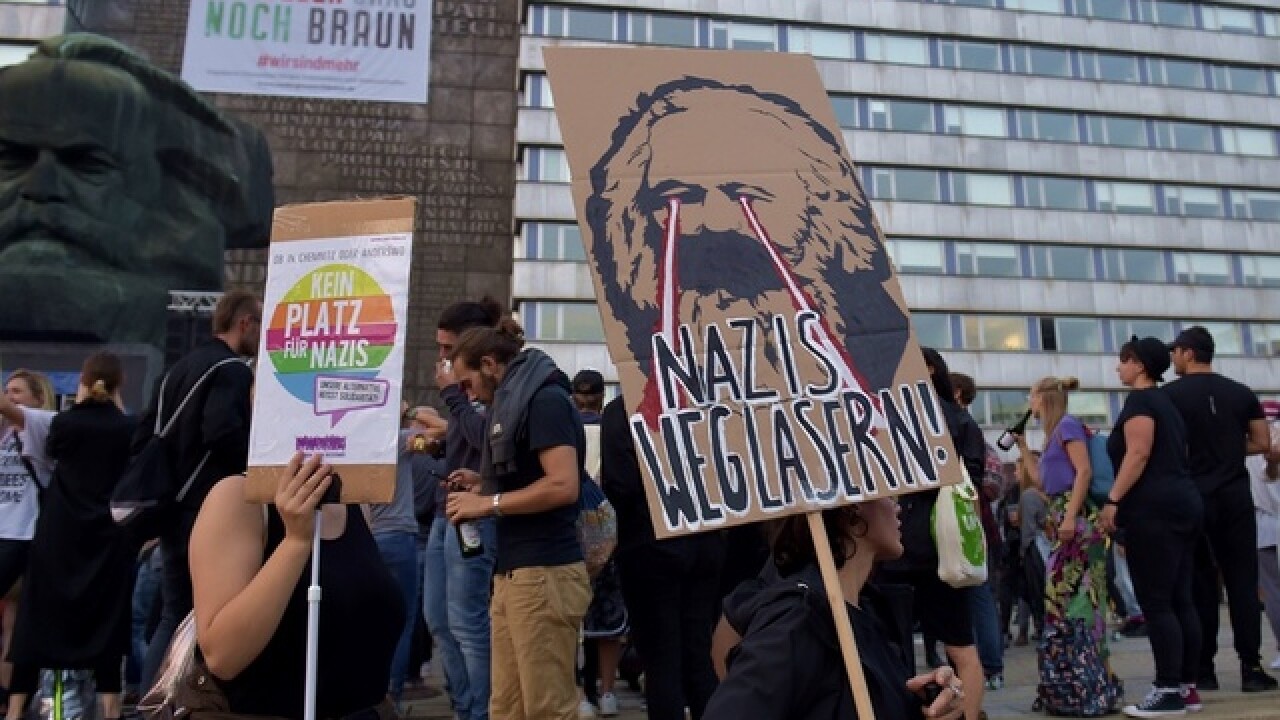 Image copyright 2018 Getty Images. All rights reserved. This material may not be published, broadcast, rewritten, or redistributed.
Matthias Rietschel
<p>CHEMNITZ, GERMANY - SEPTEMBER 03: People arrive to attend an open-air concert under the motto: "We Are More" on September 3, 2018 in Chemnitz, Germany. The concert, initiated by local band Kraftklub, is meant to display opposition to neo-Nazis who have taken to the streets during the last week following the suspected murder by migrants of Chemnitz resident Daniel Hillig. Banner center in front of the karl Marx monument reads: Laser Nazis out. (Photo by Matthias Rietschel/Getty Images)</p>

CHEMNITZ, Germany (AP) -- German authorities plan to step up surveillance of the far-right Alternative for Germany amid growing concern the third-largest party in parliament is closing ranks with extremist groups.

Activists for AfD, the nationalist party's German acronym, marched in the eastern city of Chemnitz alongside leading figures in anti-migrant group PEGIDA and members of the area's militant neo-Nazi scene in the past week, after two refugees were arrested in a German citizen's fatal stabbing.

"Parts of AfD are openly acting against the Constitution," Justice Minister Katarina Barley told the RND media group Monday. "We need to treat them like other enemies of the Constitution and observe them accordingly."

Authorities in northern Germany's Bremen and Lower Saxony said they have begun monitoring the party's youth wings in the two states.

Boris Pistorius, Lower Saxony's interior minister, said the decision wasn't related to recent events in Chemnitz. It was based on the Young Alternative's anti-democratic goals and close links to the Identitarian Movement, a white nationalist group that's been under surveillance in the state for four years, Pistorius said.

His counterpart in Bremen, Ulrich Maeurer, described the views of AfD's youth wing in the city-state as "pure racism."

AfD immediately announced that it would dissolve the two youth sections in question to avert harm to the party and insisted its aims were democratic.

Andreas Kalbitz , a member of the party's national leadership, accused other political parties of panicking in the face of AfD's electoral success.

AfD's rise since its founding five years ago has shaken Germany's establishment and called into question the country's post-World War II consensus that far-right parties have no place in the mainstream.

The party, bolstered by widespread unease in Germany about the influx of more than 1 million refugees since 2015, placed third in the 2017 national election.

Officials are particularly concerned about its strategy in eastern Germany, where AfD's Kalbitz said the party hopes to become the strongest force after state elections next year.

Saxony -- where Chemnitz is located -- has an entrenched neo-Nazi scene and AfD has done particularly well there.

The party encouraged last week's protests, which drew thousands following the Aug. 26 slaying of 35-year-old carpenter Daniel Hillig in Chemnitz. Some of the demonstrations erupted into violence between far-right marchers and counter-protesters .

A 22-year-old Iraqi citizen and a 23-year-old Syrian citizen were arrested on suspicion of manslaughter in Hillig's death, police said.

Government officials urged Germans who are upset over the killing to distance themselves from the neo-Nazis who performed the stiff-armed "Hitler salute," chanted "Foreigners out" and harassed journalists covering the demonstrations.

"If one doesn't think this way, it would be good to draw a clear line and distance oneself from those who are doing that," said Steffen Seibert, German Chancellor Angela Merkel's spokesman.

In an organized response to the far-right events, tens of thousands of people gathered Monday in Chemnitz for a free, open-air concert by some of Germany's best-known bands. The show was part of an effort to encourage young Germans to stand up against far-right extremism. It was promoted with the hashtag #WeAreMore and broadcast live online.

"The concert is highly symbolic because it sends a signal that we'll mobilize people from across the whole country, if necessary, so Chemnitz isn't abandoned to the right," said Johannes Staemmler, a political scientist who grew up in Saxony and has focused his research on eastern Germany.

Former Foreign Minister Sigmar Gabriel tweeted on Monday that "the far-right terror in Chemnitz is not a Saxon problem, it's a German one."

Gabriel criticized Germany's political establishment for being too passive when it comes to combating far-right support and urged them to visit towns with simmering anti-migrant sentiment.

"I think it would be good if as many representatives as possible -- not only in Chemnitz but everywhere -- go to places where we think the citizens are not agreeing with our state," he said in an interview with Germany's daily Bild newspaper.

Speaking publicly for the first time, Hillig's widow told the newspaper that "Daniel would have never wanted" the protests triggered by his killing.

"Daniel was neither left nor right," his widow, identified only as Bianca T., told Bild. Expressing shock about the way the far right was exploiting his death, she said: "I looked at the events on Saturday night -- this was not about Daniel at all."

"All we want to do right now is mourn him in peace," she said.