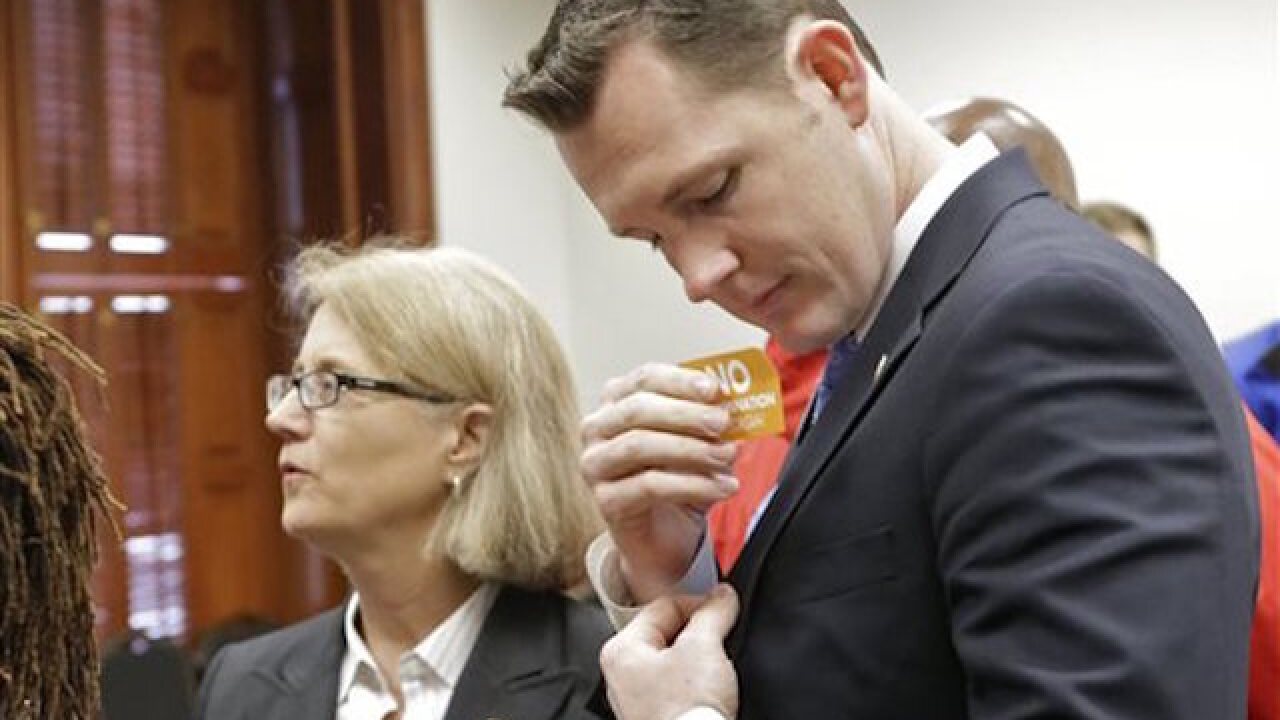 Copyright Associated Press
Bob Andres
<p>Rep. Taylor Bennett puts on a "No Discrimination" sticker with Rep. Karla Drenner before a press conference by Democratic lawmakers opposing the passage of House Bill 757, a bill approved by the Georgia Legislature that protects opponents of same-sex marriage, Monday, March 21, 2016, in Atlanta. They urged Gov. Deal to veto the bill. (Bob Andres/Atlanta Journal Constitution via AP)</p>

ATLANTA (AP) — Georgia Gov. Nathan Deal on Monday said he will veto legislation shielding opponents of same-sex marriage, after a groundswell of opposition from companies threatening to boycott the state if it became law.

The Republican announced his decision during a news conference in his office at the Georgia Capitol, saying, "I have examined the protections that this bill proposes to provide to the faith based community and I can find no examples of any of those circumstances occurring in our state."

Deal added, "I do not think that we have to discriminate against anyone to protect the faith-based community in Georgia."

Republican majorities passed the bill to broadly protect people whose actions were rooted in their religion. It also would have protected clergy who won't perform gay marriages and people who won't attend a wedding for religious reasons.

Churches and affiliated religious groups could have used their faith as an argument for refusing to serve or hire someone.

Coca-Cola and other big-name Georgia companies joined the NFL, prominent Hollywood figures and film studios urging Deal to reject the proposal. Some threatened to boycott the state if Deal didn't veto.

Deal, in his second and final term, heatedly said that those threats and questions about "my convictions and my character" from some in the religious community were misguided.

"I do not respond very well to insults or to threats," he said. "The people of Georgia deserve a leader who will make sound judgments based on solid reasons that are not inflamed by emotion."

Deal said he would sign the bill had it passed in its original form, which was limited to protecting clergy who declined to perform same-sex marriages. He said his decision to reject the bill was "about the character of our state and the character of our people. Georgia is a welcoming state; it is full of loving, kind and generous people."

Georgia's General Assembly already has left the Capitol for the year, adjourning after midnight on Thursday. Lawmakers can ask the governor to convene a special session, but need a three-fifths majority in both the House and Senate.

If they can reach that threshold, overriding a governor's veto requires a two-thirds vote in each chamber. Republicans don't hold that margin in either the House or Senate, and all Democrats voted against the bill. Several Republicans in the House and one in the Senate also cast dissenting votes.

Leaders in the House and Senate didn't call for that step on Monday.

"I've always advocated for Georgia's status as the number one state to do business, but as we move forward I will never lose sight of the importance of an individual's right to practice their faith," Cagle said.

"I'm just disappointed," McKoon said. "Governor Deal ran for office as someone the faith community could rely on."

"We thank Governor Deal for doing the right thing," said Matt McTighe, Freedom for All Americans executive director. "The governor understands that while our freedom of religion is of critical importance, it doesn't mean there's a need for harmful exemptions that can lead to discrimination."

This story has been corrected to say that one Republican senator voted against the religious exemptions bill. A previous version said that one House Republican voted no.