Georgetown to give slave descendants priority for admission 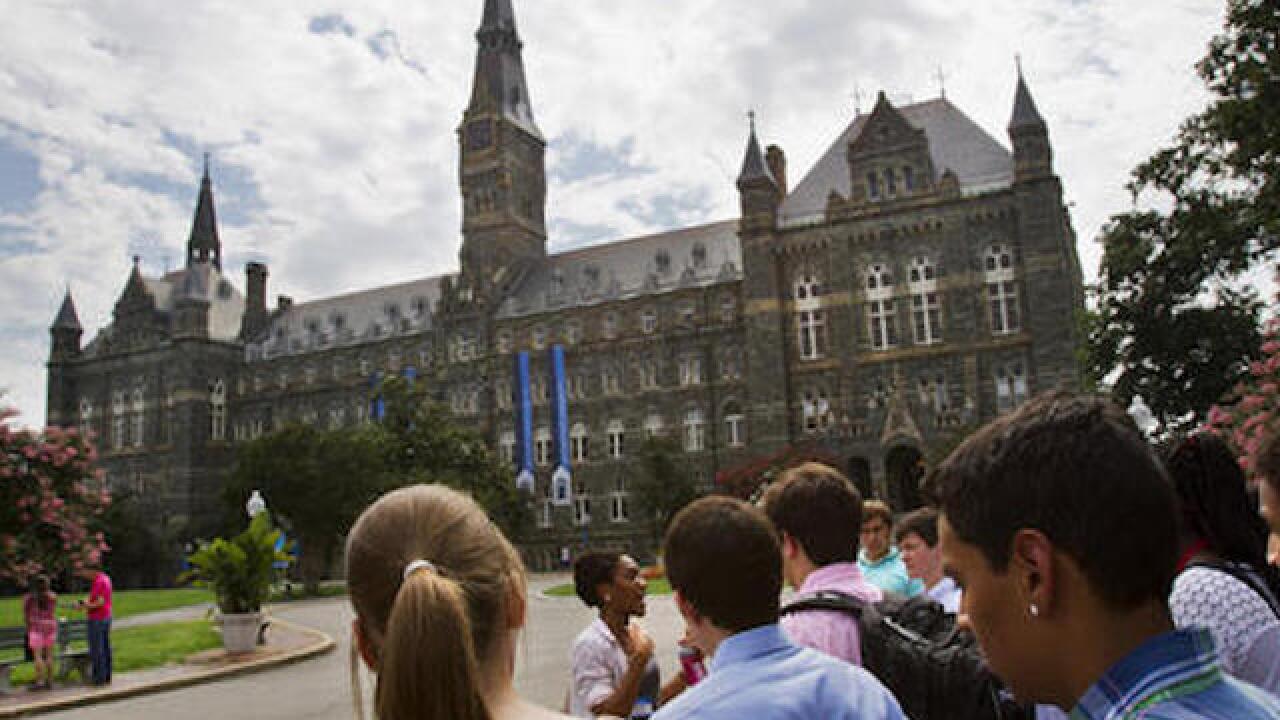 Copyright Associated Press
Jacquelyn Martin
<p>FILE - In this July 10, 2013, file photo, prospective students tour Georgetown University's campus in Washington. The good news is that Americans are saving more than ever for college. The bad news is that the average amount still isn’t enough to cover one year at a four-year public university. In a report released Tuesday. Sept. 9, 2014, the College Savings Plans Network found that the average college savings or prepaid tuition account is now worth about $20,671 _ almost double what these “529” accounts were worth during the dog-days of the recession. (AP Photo/Jacquelyn Martin, File)</p>

WASHINGTON (AP) — Georgetown University will give preference in admissions to the descendants of slaves owned by the Maryland Jesuits as part of its effort to atone for profiting from the sale of enslaved people, the president of the prominent Jesuit university in Washington announced Thursday.

The announcement from President John DeGioia came as Georgetown released a report calling on its leaders to offer a formal apology for the university's participation in the slave trade.

In 1838, two priests who served as president of the university orchestrated the sale of 272 men, women and children for $115,000, or roughly $3.3 million in today's dollars, to pay off debts at the school. The slaves were sent from Jesuit plantations in Maryland to Louisiana, "where they labored under dreadful conditions," and families were broken up, according to the report.

The transaction was one of the most thoroughly documented large sales of enslaved people in history, and the names of many of the people sold are included in bills of sale, a transport manifest and other documents. Genealogical research conducted by Georgetown and by other organizations, including The New York Times, has identified many living descendants of the slaves.

The university will reach out to those descendants and recruit them to the university, and they will have the same advantage in admissions that's given to people whose parents or grandparents attended Georgetown, DeGioia said. While universities around the United States have taken various attempts to atone for their participation in slavery, the establishment of an admissions preference appears to be unprecedented.

"We will give descendants the same consideration we give members of the Georgetown community in the admissions process," he wrote in a letter to the university community.

Many of America's early colleges have ties to slavery. Princeton University's first eight presidents owned slaves. Harvard University's law school was created with money donated by a slave owner. Dozens of schools were founded with financial backing from a cotton industry that relied on slaves, historians say.

"The history of the American college is in fact a chapter in the history of American slavery," said Craig Steven Wilder, a historian at the Massachusetts Institute of Technology and author of a 2013 book on academia's link to slavery. "Every college that was established before the American Revolution has direct ties to slavery."

On many campuses, those darker histories remained mostly hidden for decades. But in recent years, often amid pressure from students, some colleges have sought to confront their pasts.

In 2006, for example, Brown University published a report chronicling its ties to the slave trade and in 2014 installed a memorial on campus to recognize it. Harvard posted a plaque on campus this year honoring slaves who worked on campus in the 1700s, and the law school abandoned its official crest, which was tied to a family of slave owners.

Georgetown's new admissions advantage goes beyond what most colleges have done to atone for their pasts, Wilder said. But replicating it would be impossible at most other schools, because few records were kept at the time that could now be used to trace descendants, he said.

Georgetown has not decided how the apology for its involvement in slavery will be worded or presented. The report also outlined several other steps the university will take.

The university had already committed to renaming two buildings that had been named for the priests who orchestrated the sale. On Thursday, DiGioia announced that those buildings will be named after Isaac, the enslaved man whose name is the first mentioned in documents of the sale, and Anne Marie Becraft, a free African-American woman who founded a school for black girls in the Georgetown neighborhood in 1827.

Georgetown also will create a memorial to the slaves whose sale benefited the university, and it will establish an Institute for the Study of Slavery and its Legacies to support continued research into the history of slavery and engagement with descendants.