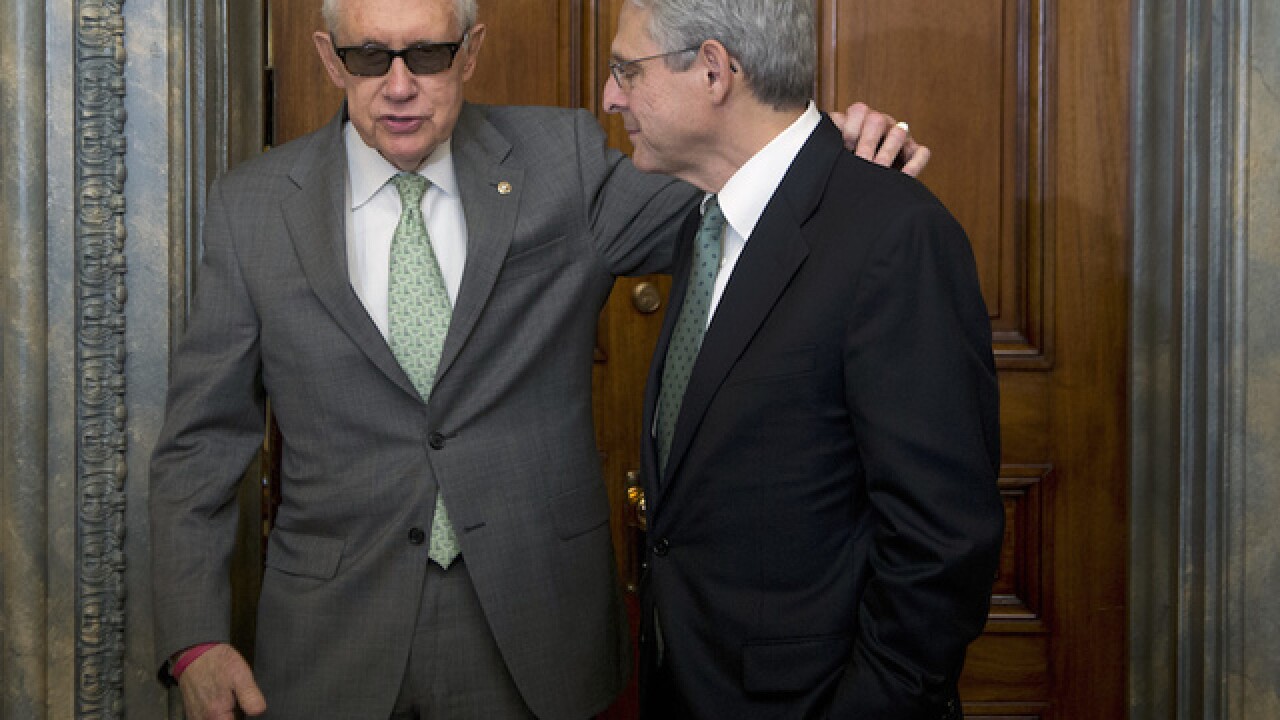 WASHINGTON (AP) — Merrick Garland has met with two supportive Senate Democratic leaders and spoken by phone to more of his Republican opponents. But he's moved no closer to weakening the GOP barricade against changing his status from Supreme Court nominee to justice.

President Barack Obama's pick to fill the late Antonin Scalia's seat made his first courtesy calls on Capitol Hill Thursday, receiving predictably favorable reviews from Senate Minority Leader Harry Reid and Sen. Patrick Leahy, top Democrat on the Senate Judiciary Committee. Yet if anything, GOP leaders dug in even further against considering his nomination, and senators left town for a two-week recess.

Saying that Garland's confirmation "could fundamentally alter the direction of the court for a generation," Senate Majority Leader Mitch McConnell, R-Ky., said Republicans would "act as a check and balance" to prevent Obama from tilting the court's 4-4 balance in the liberal direction and move on to other issues.

The No. 2 Senate GOP leader, John Cornyn of Texas, branded as "completely unacceptable" talk by a few Republican senators of considering Garland during a lame duck session should a Democrat win the White House in November's elections.

"To do it in a lame duck would to me be completely illegitimate," Cornyn said, citing Senate GOP leaders' insistence that as a matter of principle, the chamber will only consider a nominee by whoever becomes the next president.

Such statements have left Garland as a long-shot to win approval this year.

For Democrats, the day was an early salvo in their campaign to make Garland, a mild-mannered jurist with sterling credentials, the best-known victim of Republican obstruction and a household name in every election battleground state. They also sought to link the Senate GOP's stubbornness to Donald Trump, the party's leading presidential candidate and a source of nightmares for some Republican strategists who fear he'll lose and bring down congressional candidates, too.

"If Republicans continue to stand in the way and refuse to do their job, it will only be because they want Donald Trump to pick the next nominee," said Sen. Chuck Schumer, D-N.Y., among a crowd of Senate Democrats who used the Supreme Court steps as a backdrop to underscore their calls for Republicans to give Garland a hearing.

Garland met privately with Leahy, D-Vt., and then Reid, D-Nev., but said nothing to the swarms of reporters following him.

"I just told him to be himself," Reid said. "I think he's willing to take whatever they can throw at him."

Garland has spoken by phone to GOP senators including Orrin Hatch, R-Utah, and James Inhofe, R-Okla., two of the seven remaining Republicans who voted in 1997 to confirm him to the U.S. Court of Appeals for the District of Columbia Circuit, where he's now chief judge. Inhofe said he would oppose Garland but told him, "It has nothing to do with you."

With the battleground shifting to senators' home states during the upcoming recess, each side crafted plans to shore up its supporters and torment opposing senators over the next two weeks.

Obama tried to win over key interest groups and activists, holding a conference call to explain that "he hopes that this would be a priority that people all across the country would share," spokesman Josh Earnest said.

Former White House aides and other Democrats formed the Constitutional Responsibility Project, which will coordinate liberal groups' efforts around the country. They also created a website, www.weneednine.org, where visitors can "learn about the unprecedented obstruction of the Republican Senate."

On the other side, the Judicial Crisis Network said it will launch a two-week, $2 million ad campaign on television, radio and the Internet on Monday supporting Grassley, Portman and Sen. Kelly Ayotte, R-N.H., who all face re-election in November. Also targeted are Democratic lawmakers in Colorado, North Dakota and West Virginia, with ads tying them to positions a more liberal court might take, such as weakening gun rights.

In addition, anti-abortion groups including Susan B. Anthony List and Concerned Women for America formed a coalition and started www.ProtectTheCourt.com. The group said its goal was "to rally around pro-life senators as they hold firm in ensuring that the American people, not President Obama and his pro-abortion allies, get a say" in filling the court vacancy.