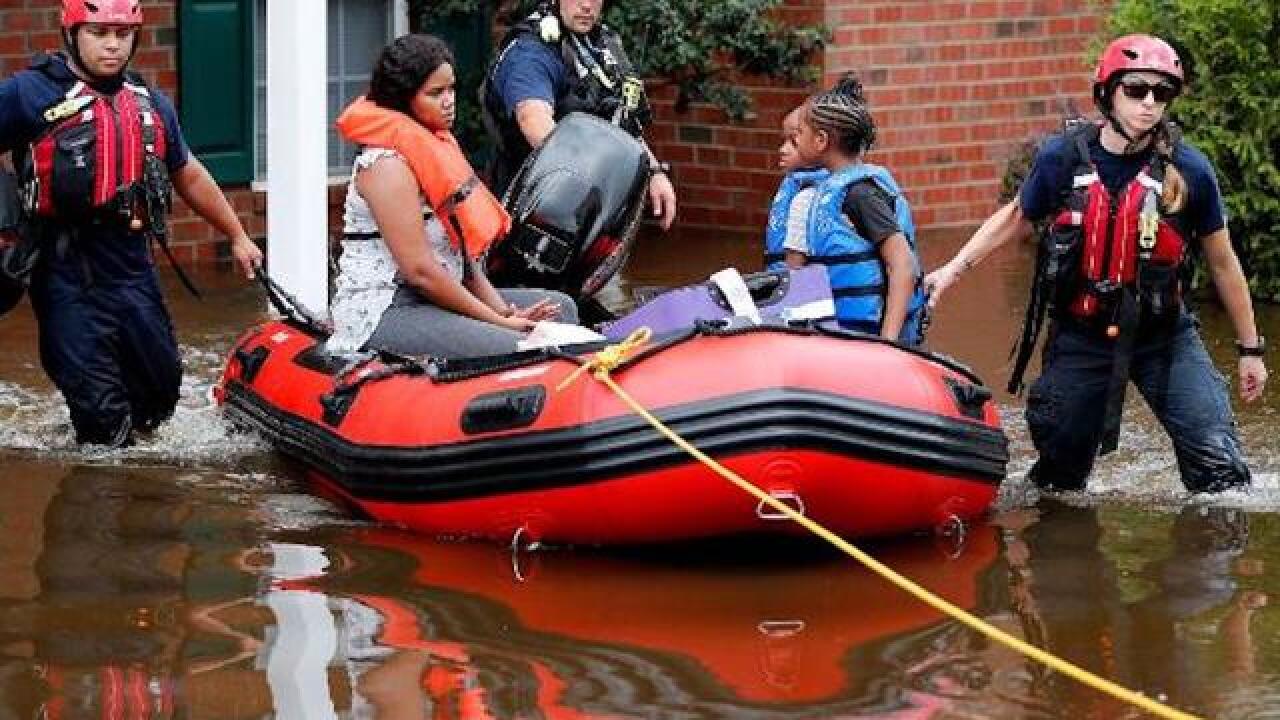 Copyright 2018 Scripps Media, Inc. All rights reserved. This material may not be published, broadcast, rewritten, or redistributed.
David Goldman

In its final act before moving offshore, post-tropical cyclone Florence is expected to bring heavy rain to parts of New England and the mid-Atlantic on Tuesday.

As Florence leaves flooded towns in the Carolinas and the aftermath of tornadoes in Virginia, the remnants of the storm are expected to affect eastern Pennsylvania, Washington, New York and Massachusetts, said CNN meteorologist Pedram Javaheri.

Flash flood watches are in effect from Maryland and northern Virginia northward into southern New York and eastward across portions of southern New England, according to the National Weather Service.

The storm is expected to produce "heavy to potentially excessive rainfall" throughout the day Tuesday in portions of the northern mid-Atlantic states and southern New England, which are forecast to receive an additional 1 to 2 inches of rain, the NWS said.

Daniel said flooding continues to be an issue in the state, which has 10 shelters open in eight different locations.

The first Florence-related death in Virginia was reported as a tornado associated with the storm's outer bands caused the collapse of a building in Chesterfield County, south of Richmond.

The person who died was an employee of a flooring company, according to  CNN affiliate WTVR-TV , who was in the company's warehouse when it was demolished by the tornado. All of the other employees in the building were able to escape. One other employee was taken to the hospital with a minor injury.

Florence may have left the south, but people are still feeling the storm's effects.

John Cassidy's 27-year-old printing business Duplicates INK was being threatened by flooding on Monday. Water was inches away from the Conway, South Carolina, business' door and it was all but certain to flood by the weekend. That didn't stop Cassidy or his employees from working, though.

They were trying to get one last big order out before the water moved in and had put sandbags around the biggest, most expensive pieces of equipment hoping to safeguard them.

"It's definitely not traditional, it just makes you realize how vulnerable we all are," Cassidy told CNN Monday.

"I've accepted it, my building is gonna be flooded," he said. "We're just going to deal with what we have to deal with and be as tough as we can be and move through it. It sucks."

Cassidy said he continued working because he made commitments to his customers, and because 10 families rely on paychecks from the business.

"We can't just shut the door down," he said.

Cassidy plans to relocate his staff to a building in downtown Conway, according to  CNN affiliate WBTW-TV , where Duplicates INK will continue operating. Cassidy said several competitors and friends will fill the company's orders for them.

Hurricane Florence caused a record amount of rainfall in North Carolina and has created the highest rainfall total for any tropical system ever to strike the East Coast of the United States.

Elizabethtown, North Carolina, has received 35.93 inches of total rainfall since Thursday afternoon, a record for rainfall from a tropical system in the state. For context, Javaheri said, Seattle, Washington, known for its rainy weather, averages 37 inches of rain a year.

The town, about 43 miles southeast of Fayetteville, is near the Cape Fear River.

Wilmington was the epicenter of Florence's destruction. Rainfall totals of 26.58 inches have caused high waters all around the city, effectively cutting it off from the rest of North Carolina.

"Any direction you try coming into the city, from 20 to 40 miles out, roads are impassable," Mayor Bill Saffo said. "Anyone trying to get in here -- don't try. You will be turned away. Highway Patrol won't let you."

Those high waters have kept even Federal Emergency Management Agency crews and Duke Energy trucks away. The U.S. Coast Guard has made dozens of water rescues in the area, with one helicopter alone saving 26 adults and 11 children, as well as seven dogs and four cats, south of Wilmington.

Wilmington was also the site of the first deaths of the hurricane. High winds knocked over a tree that fell on a home, killing a 41-year-old woman and her 7-month-old son.

This year will be the wettest in the city's 140 years of record-keeping, even with 3½ months left. It has seen more than 86 inches of rain this year; the average to date is about 43 inches.

Meanwhile, Lumberton received 22.76 inches of rain since Thursday. The Lumber River, which cuts through Lumberton, is expected to crest around 25.7 feet. If it gets higher than 26 feet, "all bets are off," city public works Deputy Director Corey Walters said.

Residents were bracing for disaster over the weekend as the river seeped through a patched-up gap in the levee system.

Causes of death include drowning and fallen trees

Of the deaths linked to Florence, 25 were in North Carolina, six were in South Carolina and one was in Virginia. They include:

-- One-year-old Kaiden Lee-Welch who was swept away by rushing waters Sunday and later found dead in Union County, North Carolina.

-- An elderly Union County man whose body was found in his submerged car.

-- A 3-month-old who died when a tree fell on a mobile home in Dallas, North Carolina.

-- A man who died when his truck hit an overpass support beam on Interstate 20 in Kershaw County, South Carolina.

-- A man who drowned in an overturned vehicle on a flooded road in Georgetown County, South Carolina.

-- A mother and a child who were killed when a tree fell on their house in Wilmington, North Carolina.

-- A woman in South Carolina who died after striking a downed tree while she was driving.

-- A woman who went into cardiac arrest in Pender County, North Carolina. When emergency responders tried to reach her, their path was blocked by fallen trees.

-- An 81-year-old man who fell and struck his head while packing to evacuate in Wayne County, North Carolina.