"When I first walked into school there was like eight people and then like they kept saying there was like police and a lockdown drill will happen," said Sofia Diaco, a fourth-grade student at Academy of the Holy Names.

Tampa Police advised school officials at Academy of the Holy Names to operate on a modified lockdown Tuesday as they searched for the person who threatened to "shoot up the school."

"There's no question that when you hear about such a specific and violent threat, you worry about your children's safety and you entrust that safety to the school," said parent Dan Diaco.

Ainya Smalls, 23, was arrested for making the threat in front of students and staff as a supervisor escorted her off campus after being terminated on Monday.

Smalls worked for a cleaning company hired by the school.

"A lot of people were scared, some post-traumatic issues from some of the children, and some of the parents to be honest," Diaco said.

Scripps station WFTS in Tampa has learned, Smalls already had a warrant out for her arrest for criminal mischief while she worked at the historic Catholic school.

But after this incident, they will now conduct their own screenings for all contracted employees and plan on re-screening every member of the cleaning staff.

"I think the Academy's new policy of taking control of the background checks is a wonderful remedy to help prevent something like this from happening again," Diaco said. "It's no guarantee, but it's certainly an improved layer of protection."

The following was sent out following the incident: 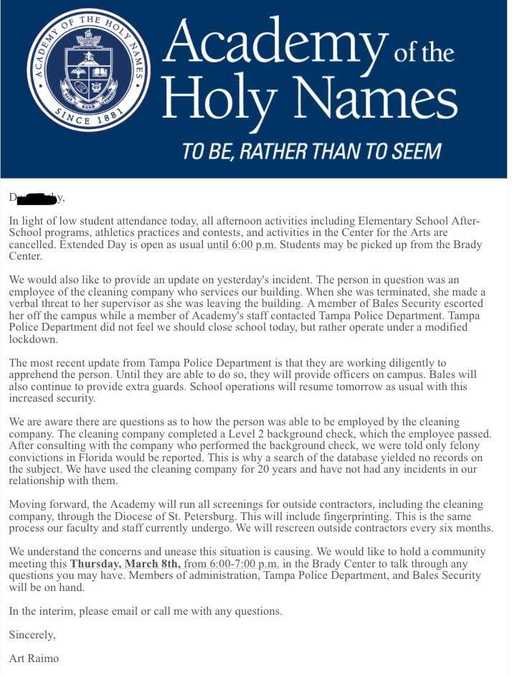 School officials will hold a meeting for parents starting at 6 p.m. Thursday in the Brady Center to discuss the school threat.