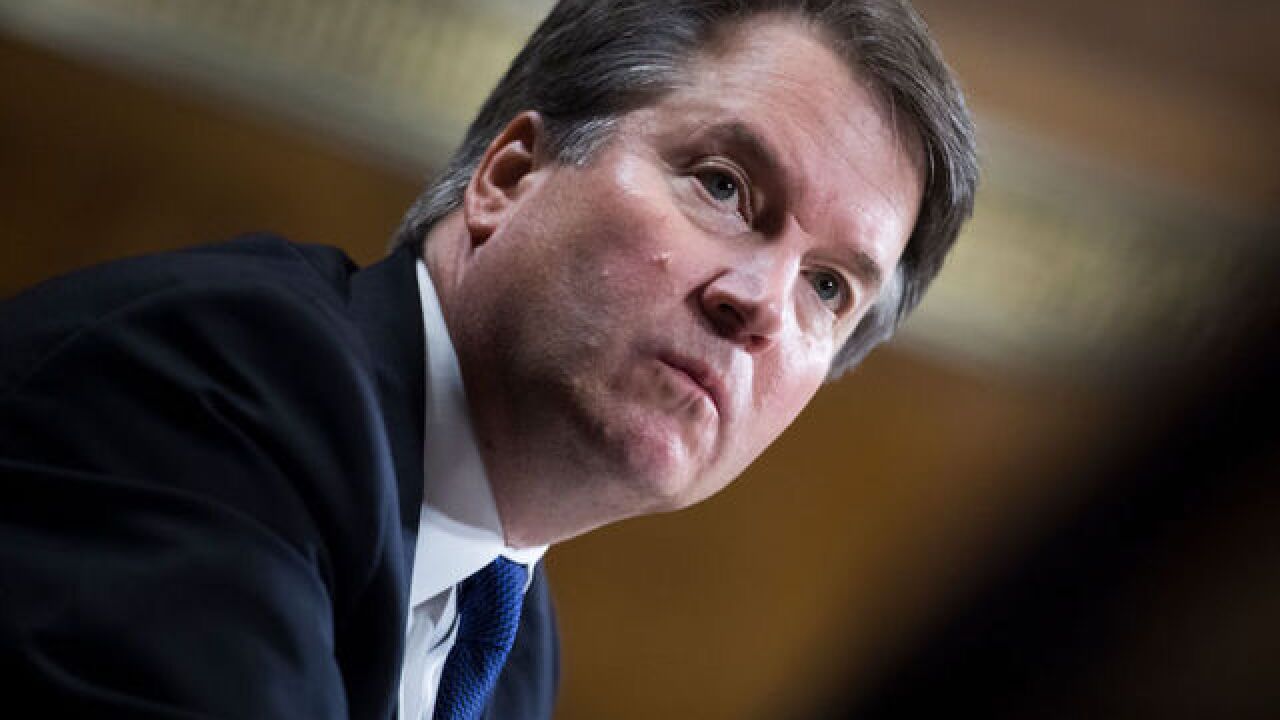 Image copyright 2018 Getty Images. All rights reserved. This material may not be published, broadcast, rewritten, or redistributed.
Pool
<p>Judge Brett Kavanaugh testifies during the Senate Judiciary Committee hearing on his nomination be an associate justice of the Supreme Court of the United States, focusing on allegations of sexual assault by Kavanaugh against Christine Blasey Ford in the early 1980s. </p>

The FBI investigation into allegations against Supreme Court nominee Brett Kavanaugh is narrowly focused, top officials said in interviews on Sunday, with sources telling CNN that the White House is controlling the scope of the probe.

The investigation is the result of a dramatic day in Washington on Friday that began with quick movement toward Kavanaugh's confirmation and ended with a pause in the process while the FBI steps in. Following the agreement for the FBI to investigate Kavanaugh, the focus has moved to how the probe will be handled, its ultimate findings, and whether it will put to rest fears about a lack of due diligence over the nominee for the nation's highest court.

A source with knowledge of the investigation told CNN that the FBI would take its direction from the White House, not the Senate, and that the agency would interview a handful of people.

One of those people interviewed included Deborah Ramirez, whom the FBI interviewed Sunday, a source told CNN on Sunday afternoon. Ramirez came forward last week with allegations Kavanaugh exposed himself to her at a party while both were students at Yale, a claim which Kavanaugh immediately denied.

What's being investigated -- or not?

Kavanaugh's drinking history, which has come up in the allegations, is not part of the probe, which is being managed by the FBI's security division at the agency's headquarters in Washington, the source said.

While President Donald Trump declared Saturday that the FBI would have "free rein" in its investigation, people close to the matter say the scope is far more limited. White House counsel Don McGahn, who is the administration's leading advocate for Kavanaugh's confirmation, is overseeing the probe for the President and working closely with Senate Republican leaders.

The source reiterated that the agents would make no conclusion about what witnesses tell them and would hand their results over to the White House, which is standard protocol in similar background investigations. The source would not say if the direction the FBI received listed specific people or if it was to investigate specific allegations.

Kavanaugh has denied all the allegations made against him.

In a tweet Sunday afternoon, Trump pushed back on criticism of the FBI investigation.

"Wow! Just starting to hear the Democrats, who are only thinking Obstruct and Delay, are starting to put out the word that the 'time' and 'scope' of FBI looking into Judge Kavanaugh and witnesses is not enough. Hello! For them, it will never be enough - stay tuned and watch!" he wrote.

A source briefed on the matter said the White House gave the limited scope of the investigation to the FBI based on what the Senate asked.

Trump ordered the investigation on Friday after Arizona GOP Sen. Jeff Flake pushed for the Senate to request the FBI review.

Two sources with knowledge of the situation told CNN, however, that Senate Republicans were working with McGahn, who was "trying to make it as narrow as possible."

On Sunday, California Sen. Dianne Feinstein, the ranking Democrat on the Senate Judiciary Committee, wrote McGahn and FBI Director Christopher Wray to request a copy of the directive the White House send the FBI initiating the investigation.

"Given the seriousness of the allegations before the Senate, I am writing to request that you provide the Senate Judiciary Committee with a copy of the written directive sent by the White House to the FBI," the California senator wrote. "In addition, if the FBI requests any expansion beyond the initial directive, please provide the names of any additional witnesses or evidence."

The FBI has started investigating Christine Blasey Ford's allegation that Kavanaugh sexually assaulted her when they were high schoolers, which the judge has repeatedly denied.

"We have not heard from the FBI, despite repeated efforts to speak with them," Ford's lawyer, Debra Katz, told The New York Times.

Both Ford and Kavanaugh testified before the Senate Judiciary Committee last Thursday.

FBI agents are expected to interview several people who Ford said were present at the party where the alleged assault took place, including Mark Judge, Patrick J. Smyth and Leland Keyser, sources familiar with the matter told CNN.

Ford has alleged Judge was present in the room with her and Kavanaugh when the nominee allegedly assaulted her. Judge has said he has no memory of the assault Ford described and does not recall the party, and Smyth and Keyser have also said they don't remember the party.

Ramirez has been contacted by the FBI, according to one of her attorneys. A source familiar with the matter told CNN that the FBI spoke with Ramirez on Sunday and that she supplied the agency with the names of witnesses for her accusation.

What the White House says

Kellyanne Conway, a counselor to Trump, said on CNN's "State of the Union" that the White House was respecting the independence of the FBI in the matter but stressed her belief that it should not grow into a "fishing expedition."

"It will be limited in scope," Conway said. "It's meant to last one week, I believe beginning last Friday. And it will -- it's not meant to be a fishing expedition."

Asked if McGahn had told the FBI who it could interview, Conway said, "I don't think Don McGahn would do that, but I've not talked to him about it."

White House press secretary Sarah Sanders made similar points in an appearance on "Fox News Sunday," where she said the White House was "not micromanaging" the FBI probe and that she was not aware of McGahn telling the FBI who it could interview.

"The White House counsel has allowed the Senate to dictate what these terms look like and what the scope of the investigation is," Sanders said.

A person familiar with the matter told CNN that Senate Republicans drafted the initial list of people it wanted the FBI to interview in the investigation and gave the list to the White House. The source noted that it was not a final list and that they were leaving open the possibility of additional witnesses.

"They wanted to talk -- the FBI to talk with the witnesses that Dr. Ford named," Graham said. "They want to talk to Ms. Ramirez, because she refused to talk to the committee. They're going to Mark Judge, did you ever see Brett Kavanaugh drug women or engage in gang rape. I think that's going to be the focus of it."

Graham was referring to an allegation from another woman, Julie Swetnick, who has come forward with accusations against Kavanaugh and Judge, saying they were present at the party in the early 1980s where she says she was gang-raped.

Swetnick did not identify Kavanaugh or Judge as one of her attackers. Swetnick said further that over a series of parties, she saw Kavanaugh "consistently engage in excessive drinking and inappropriate contact of a sexual nature with women during the early 1980s."

Kavanaugh has also denied Swetnick's allegations, characterizing them as "from the Twilight Zone."

Judge said in a statement that he categorically denies Swetnick's allegations.

As of Sunday morning, there was no indication that the FBI was going to talk to Swetnick.

Two Republican sources familiar with the matter have told CNN that the hope is that when investigators sit down with Judge, they will ask him not only about Ford's allegations, but also about those made by Swetnick.