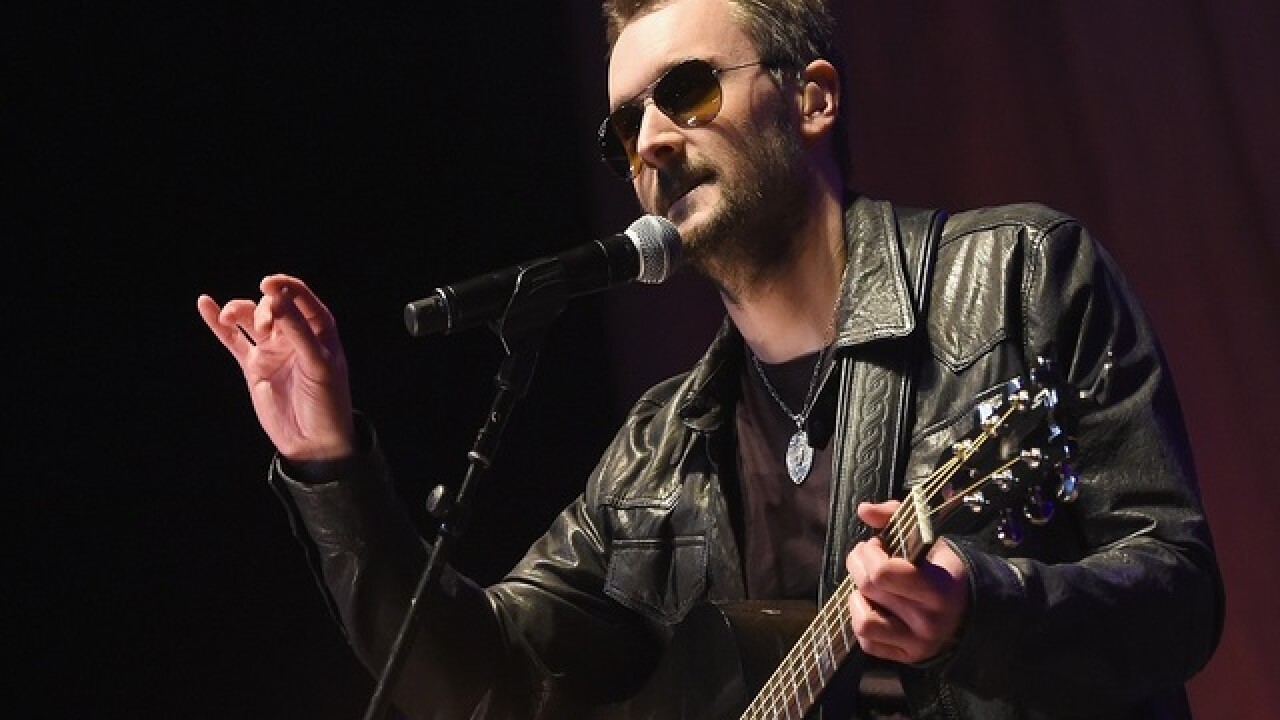 At the Academy of Country Music Awards, Eric Church paid tribute to rock icons like David Bowie, The Eagles' Glenn Frey and other late stars during his performance.
Church intertwined songs from the singers during his performance Sunday, as well as songs from late performers Lemmy Kilmister of Motorhead and former Stone Temple Pilots frontman Scott Weiland at the MGM Grand Garden Arena in Las Vegas.
Host Luke Bryan introduced Church and said the performer was a big fan of vinyl records and was set to pay tribute to "four of his musical heroes." Church performed the track, "Record Year."
Tim McGraw's performance was also a highlight: As he sang "Humble & Kind," a diverse group of people joined him onstage, from children to adults of every race. Some even dressed in clothes representing their backgrounds, and others wore clothes representing their occupation.
Other performers include Jason Aldean, Kenny Chesney, Little Big Town with Trombone Shorty, Kelsea Ballerini, who singer with pop singer Nick Jonas. Later in the show, airing on CBS, Katy Perry will sing with Dolly Parton.
Carrie Underwood earned a loud applause after singing "Church Bells." She was nominated for female vocalist of the year, but lost to Miranda Lambert.
"Carrie you just killed it. ...She is literally the perfect singer," Lambert said onstage. "I'm really excited for women in country music."
Blake Shelton may not be hosting this year's ACMs with Luke Bryan, like usual, but the singer joined Bryan to open the show with a performance, taking the spot of new co-host Dierks Bentley.
Shelton joined Bryan, who also played guitar, to perform "Huntin', Fishin' and Lovin' Every Day." Bentley was waiting backstage to jump into the performance before Shelton took his microphone.
"The Voice" coach followed the collaborative performance with his own, of his recent single "Came Here to Forget."
After the performance, the hosts told a string of jokes, including one about country singers in the audience taking credit for the breakthrough career of leading nominee Chris Stapleton, who has written hits for dozens of country stars.
Stapleton dominated at the Grammys and the Country Music Association Awards, but will he repeat at the ACM Awards? Yes and no.
Stapleton walked in with seven nominations, but he's not up for the top award: entertainer of the year. But he won major awards such as album and song of the year.
"You got to be kidding me. I thought for sure we were going to be girl-crushed on this one," Stapleton said onstage after winning song of the year for "Nobody to Blame" and beating Little Big Town's mega-hit "Girl Crush."
Stapleton is also up for male vocalist of the year. The wins Sunday come after he collected two Grammys in February and three CMAs in November, when he also had a show-stopping performance alongside Justin Timberlake.
For entertainer of the year, reigning champ Bryan will battle Garth Brooks, Aldean, Church and Lambert. A win for Lambert would make her the first woman to win the honor since Taylor Swift in 2012.
Presenters include Kiefer Sutherland, who is working on a country album; British actor Tom Hiddleston, who portrays Hank Williams in biopic, "I Saw the Light"; Miss America Betty Cantrell; and singers Kacey Musgraves, Darius Rucker, Martina McBride and Jake Owen. Additional performers include Stapleton, Thomas Rhett, Sam Hunt and Florida Georgia Line.
Associated Press 2016