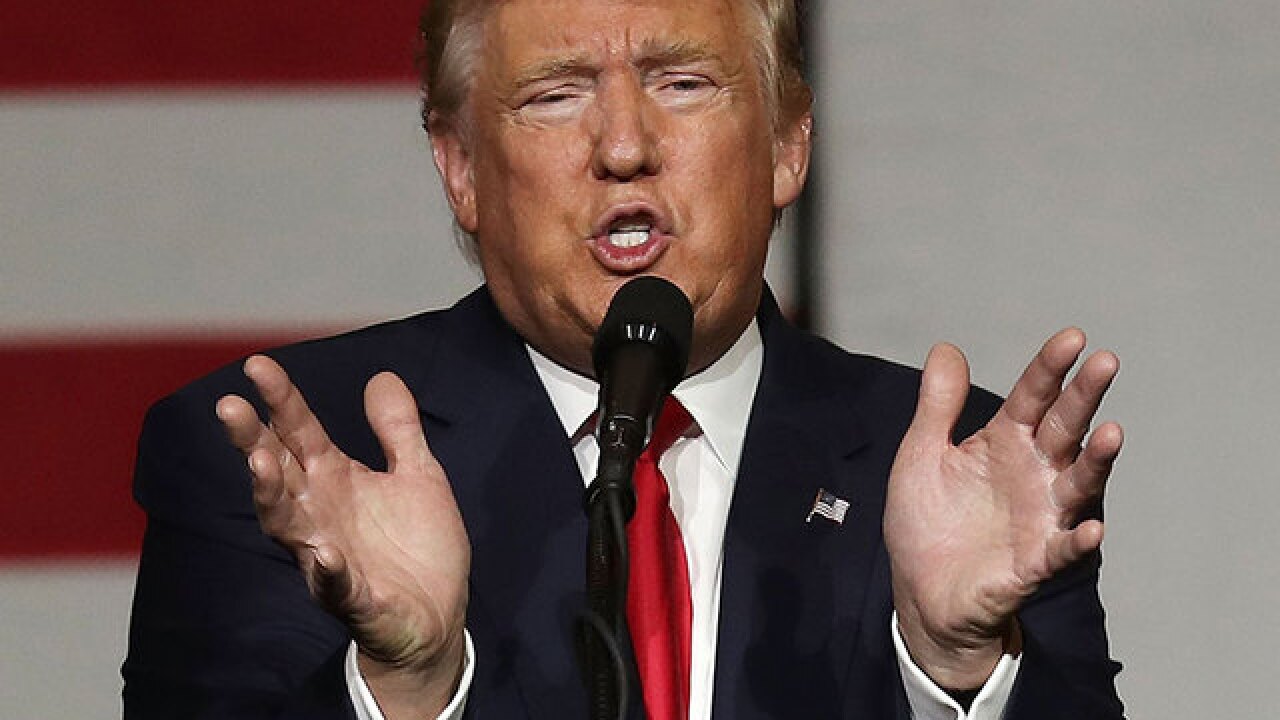 With eight women accusing Trump of unwanted kissing, groping or more, the New York businessman maintained his innocence and his denunciation of opponent Hillary Clinton and an international media conspiracy aimed at denying him the White House.

"100 percent fabricated and made-up charges, pushed strongly by the media and the Clinton Campaign, may poison the minds of the American Voter. FIX!" Trump tweeted on Saturday morning.

Clinton maintained a relatively low profile as Trump stormed, but more hacked emails from WikiLeaks raised anew questions about her private versus public pronouncements. Those released Friday showed her campaign had asked former President Bill Clinton to cancel a speech to an investment firm last year because of concerns that the Clintons might appear to be too cozy with Wall Street just as she was about to announce her candidacy.

Such revelations were no match for the sordid new accusations against Trump. Summer Zervos, a former contestant from Trump's NBC show "The Apprentice," said the series' star became sexually aggressive at a Beverly Hills hotel in 2007. He kissed her open-mouthed and touched her breasts in a private room, she said during a news conference.

Late Friday night, the Trump campaign released a statement in which a cousin of Zervos said he was "shocked and bewildered" by her account. John Barry of Mission Viejo, California, said Zervos "wishes she could still be on reality TV, and in an effort to get that back she's saying all of these negative things about Mr. Trump."

In a story published online Friday, Kristin Anderson told The Washington Post that she was sitting on a couch with friends at a New York nightclub in the early 1990s when a hand reached up her skirt and touched her through her underwear. She said she pushed the hand away, turned around and recognized Trump as the man who had groped her.

Trump called his accusers liars and "sick" women seeking fame or money. During a rally in North Carolina, Trump dismissed one of them by saying, "She would not be my first choice, that I can tell you."

In alleging a widespread conspiracy, Trump assailed The New York Times in particular, noting its connection to Mexican billionaire Carlos Slim, a major shareholder in the media company. Spokesman Arturo Elias Ayub later said Slim doesn't know Trump at all "and is not the least bit interested in his personal life."

The WikiLeaks release of emails stolen from Clinton campaign chairman John Podesta's personal account showed aides having to convince the former first lady to persuade her husband to cancel the Wall Street speech ahead of her campaign rollout. The Clintons' paid speeches have been an issue throughout the campaign, particularly lucrative speeches to financial interests.

In remarks at a fundraiser Friday, Hillary Clinton spoke of a need for national healing. "I take no satisfaction in seeing what Trump does and says because it hurts — it hurts me and it hurts our country," she said.

Polls suggest Trump has fallen further behind Clinton nationally and in most battleground states. Early in-person voting is underway in 20 states, including Ohio, where President Barack Obama railed against Trump a day after first lady Michelle Obama declared in a passionate speech, "Enough is enough."

The Obamas both seized on Trump's words, captured in a video released last week, bragging about kissing and groping women without their permission. The 70-year-old billionaire has apologized, but also repeatedly dismissed his comments as "locker room talk."

Even before the mounting allegations, there was evidence that Trump's troubles were hurting the Republican Party's ability to raise money.

The Republican National Committee has raised about 25 percent less over the past three months than it did over the same period four years ago, when Mitt Romney was atop the ticket.