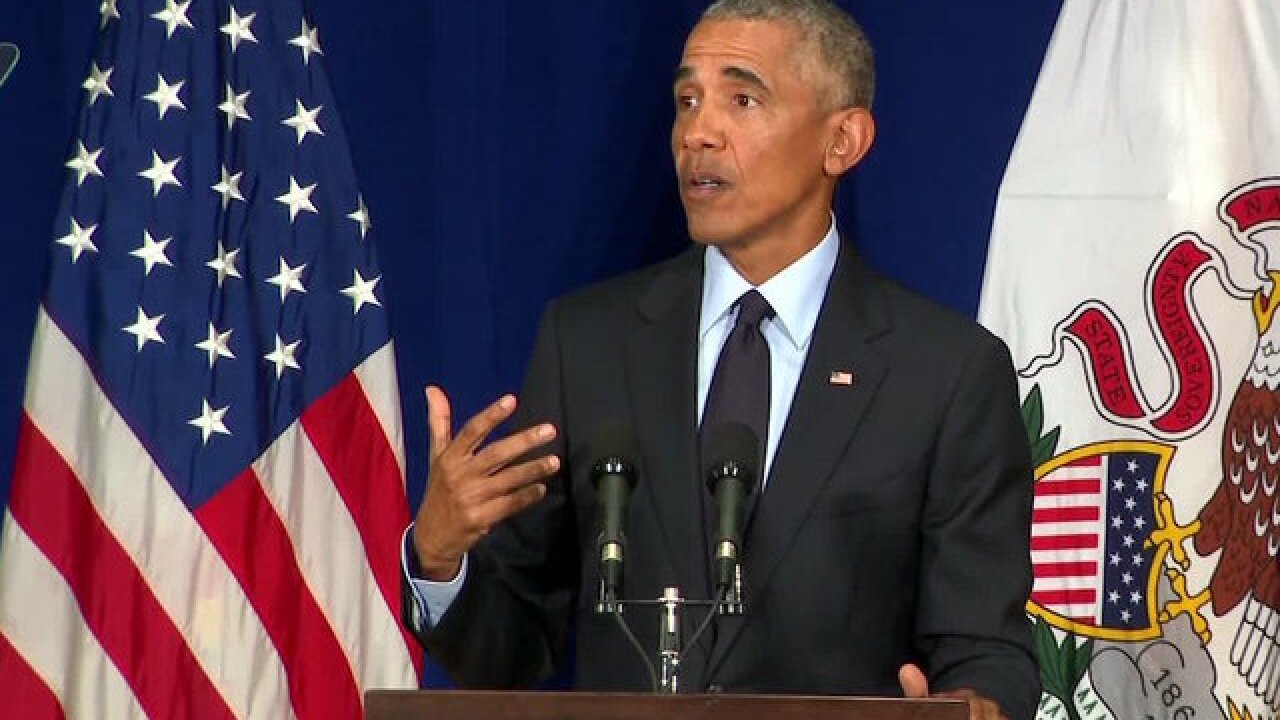 Former President Barack Obama, a day after delivering a stinging critique of President Donald Trump's time in office, had a stark warning for fired-up Democrats in California: This is not rock bottom.

Obama urged the Democrats at his first rally of 2018 to get out and vote in November, telling them that the dismay they feel about Washington right now means nothing is they don't follow through by voicing their displeasure at the ballot box.

"This is a consequential moment in our history. The fact is if we don't step up things can get worse," he said to audible groans from the 750 Democrats in the room on Saturday. "When there is a vacuum in our democracy ... other voices fill the void. But the good news is in two months, we have a chance to restore some sanity in our politics. We have a chance to flip the House of Representatives."

The speech was a departure from the lengthy and direct rebuke of Trump he delivered on Friday, where he mentioned the current President two times and lambasted him for leaning on law enforcement to protect Republicans from prosecution, slammed him for "cozying up" to Russian President Vladimir Putin and faulted him for equivocating about who was at fault during the white supremacist protests last year in Charlottesville, Virginia.

On Saturday, Obama didn't mention Trump once and, instead, told Democrats that the problems in Washington are bigger than one person.

"The biggest threat to our democracy ... is not one individual, it is not one big super PAC billionaires," he said. "It is apathy, it is indifference, it is us not doing what we are supposed to do."

The event, organized by the Democratic Congressional Campaign Committee, was an attempt to boost seven Democrats running in districts Hillary Clinton won in 2016 but which are represented by the Republicans in the House. The event officially ended Obama's absence from the campaign trail, a months-long void that has angered some Democrats who believe he is not engaging in a political fight where he could be helpful.

"It is always tempting for politicians, for their own gain, and for people in power, to try to see if they can divide people, scapegoat folks, turn them on each other because when that happens, you get gridlock and government doesn't work and people get cynical and they decide not to participate," he said. "That, unfortunately, has been a spiral that we have been on for the last couple of years."

His prescription, he said, was "when each of us as citizens say we are going to take it upon ourselves to do it differently."

And while the speech was not as direct as his remarks in Illinois, Obama did cast the current administration as one that is seizing on division.

That Illinois speech was a break from tradition -- one where former commanders-in-chief don't criticize their successors -- but Obama argued that Trump's presidency represented a time when everyone needed to stand up.

"You happen to be coming of age" amid backlash to progress, Obama told the students at University of Illinois at Urbana-Champaign. "It did not start with Donald Trump, he is a symptom, not the cause. He is just capitalizing on resentment that politicians have been fanning for years. A fear, an anger that is rooted in our past but is also borne in our enormous upheavals that have taken place in your brief lifetimes."

His overarching message in both speeches, however, was the complaining does nothing when people don't vote.

"Don't tell me your vote doesn't matter," he said in Illinois. "And if you thought elections don't matter, I hope these last two years have corrected the impression."

A polarizing draw to the polls

Those Democrats Obama rallied with on Saturday welcomed his return to the campaign trail.

"It's truly exciting to welcome President Obama to Southern California, and I welcome the opportunity to campaign alongside him and energize voters ahead of the final two months of the campaign," Cisneros said in a statement.

Chelsea Brossard, Harder's campaign manager, called Saturday an "all hands on deck moment" for the campaign and said they were "proud to have this level of support as we begin the final stretch."

But Republicans have been just as eager to welcome Obama back to the campaign trail, too, believing he will rally their base as much, if not more, than he rallies Democrats.

"For three cycles (2010, 2012, 2014) President Obama fired up Republicans like nobody," Rep. Steve Stivers, the head of the National Republican Congressional Committee, told reporters on Friday. "And I'm happy he wants to do it again."

While Clinton won all seven districts in 2016, Obama had won only three in 2012, leaving Democrats in the state hopeful that his Obama's return could end up helping them.

Cox, Democrats' nominee in CA-21, said that optimism was misplaced, and action necessary.

"This President and this Congress are hitting people right in the pocket book and people see that," Cox said, arguing Obama will offer them an image of Democratic leadership. "The best thing the president (Obama) could say is this: Vote, vote, vote. And that is it. We can march, we can rally, we can put signs up. All that matters ... is getting out there and voting."

Following his California visit, Obama will travel to Ohio next Thursday for an event for Richard Cordray, the Democratic gubernatorial candidate in Ohio, and he is also slated to headline a campaign event in Pennsylvania later this month, and a New York fundraiser for the National Democratic Redistricting Committee, an organization led by former Attorney General Eric Holder, Obama's longtime friend.