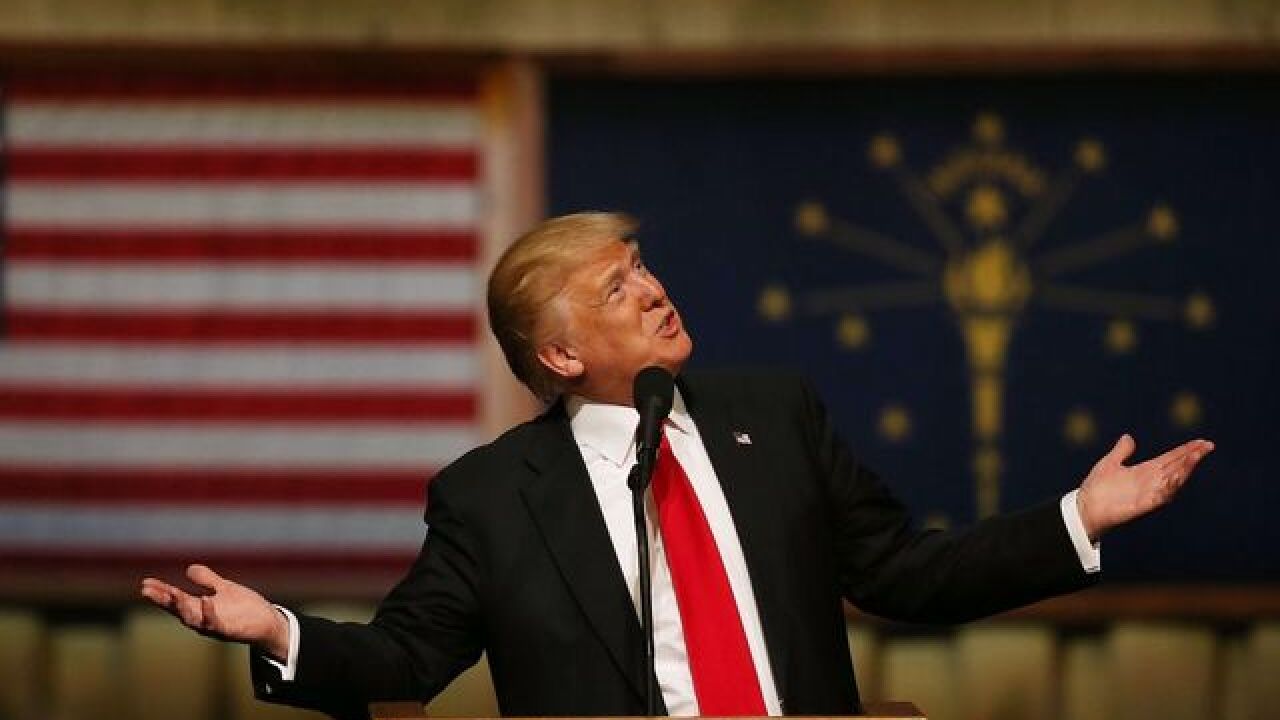 WASHINGTON (AP) — Key Senate Republicans voiced optimism Tuesday about Donald Trump's presidential prospects in November, the clearest signal yet to the GOP rank and file to unite behind him and turn their energy against Democrat Hillary Clinton. But it was uncertain whether the doubters could be quieted.
Trump added two more primaries to his column, taking West Virginia and Nebraska. Clinton lost West Virginia to Sen. Bernie Sanders, who refuses to bow out as Trump's GOP foes have, but that hardly dented her huge Democratic delegate lead. Clinton won in Nebraska, but those delegates had already been allocated in an earlier caucus won by Sanders.
The presidential race was on lawmakers' minds on Capitol Hill, too.
"We have a nominee, it looks like he may well be very competitive, and we want to win the White House," Senate Majority Leader Mitch McConnell, R-Ky., told reporters. He also said, "We know that Hillary Clinton will be four more years of Barack Obama. I think that's going to in the end be enough to unify Republicans across the country."
Still, doubt and angst over Trump remained palpable as GOP lawmakers returned from a weeklong recess that saw him effectively clinch the presidential nomination. For some, the question of whether they were backing their party's standard-bearer — a no-brainer in a normal election year — proved too much to answer.
"We're not doing any Trump questions today," an aide to Sen. Mark Kirk of Illinois told a crowd of reporters as Kirk, one of the most endangered Senate Republicans, sped into a meeting.
Another Republican who's up for re-election, Tim Scott of South Carolina, offered his support, but like others managed to sound grudging and backhanded in the process. "I'm supporting the Republican candidate, and it happens to be Donald Trump," he said.
A third, Sen. Johnny Isakson of Georgia, deflected questions about whether he would back Trump, saying he's focused only on securing another six-year Senate term.
"The only thing I can do is get re-elected so we have a Republican majority in the Senate," Isakson said. "I will support the Republican ticket and I'm endorsing me for my Senate seat."
The comments reflected ongoing divisions in a party still reeling over Trump's success in locking up the nomination and pushing his two remaining rivals from the race last week. McConnell and others have decided that the best approach is to get behind Trump. But especially in light of House Speaker Paul Ryan's surprise decision to withhold his support, unity is elusive for now.
That could start to change Thursday, when Ryan, McConnell and other congressional Republicans meet with Trump, who himself has downplayed the meeting and suggested he can win the election unity or no.
Ryan defended his stance anew Tuesday, insisting that he was just being honest in saying Trump had more work to do to show he could unify the party after alienating numerous voters including women, Hispanics and many conservatives.
"It is going to take more than a week to unify this party," Ryan said in an interview with the Wall Street Journal broadcast online. "If we just pretend to unify without unifying, then we'll only be at half-strength, and it won't be good for us in the fall."
But some Republicans argued that Ryan himself was making it harder to unify by essentially giving other Republicans cover to refuse to get behind Trump.
"I didn't really appreciate his comments," said Sen. Jim Inhofe of Oklahoma. "They have to establish a workable relationship, and I think they will, but that's not a good way to start."
Yet after a bruising primary season others were not yet ready to move on. GOP Sen. Ted Cruz of Texas, Trump's leading opponent before he dropped out last week, made clear he was in no hurry to endorse the mogul and reality TV star who defeated him.
"The voters in the primary seem to have made a choice and we'll see what happens as the months go forward," Cruz told conservative talk radio host Glenn Beck.
Cruz went so far as to leave open the possibility of restarting his campaign if he should score a surprise win in Nebraska, while making clear he didn't anticipate that outcome.
"The reason we suspended the race last week is with Indiana's loss I didn't see a viable path to victory. If that changes we will certainly respond accordingly," Cruz said.
Another of Trump's vanquished opponents, Sen. Marco Rubio of Florida, said at the Hudson Institute: "He's the nominee of the Republican Party, or presumptive nominee via the voters. I respect that and accept it, but that's not going to change the reservations I have about his campaign or about some of the policies he's established."
Mississippi Sen. Roger Wicker, who heads Senate GOP re-election efforts, said "actually I feel pretty good" about prospects to hang onto control of the Senate.
"It seems to me after every presidential primary there's a coming together, and I expect that will happen," Wicker said.
Associated Press 2016