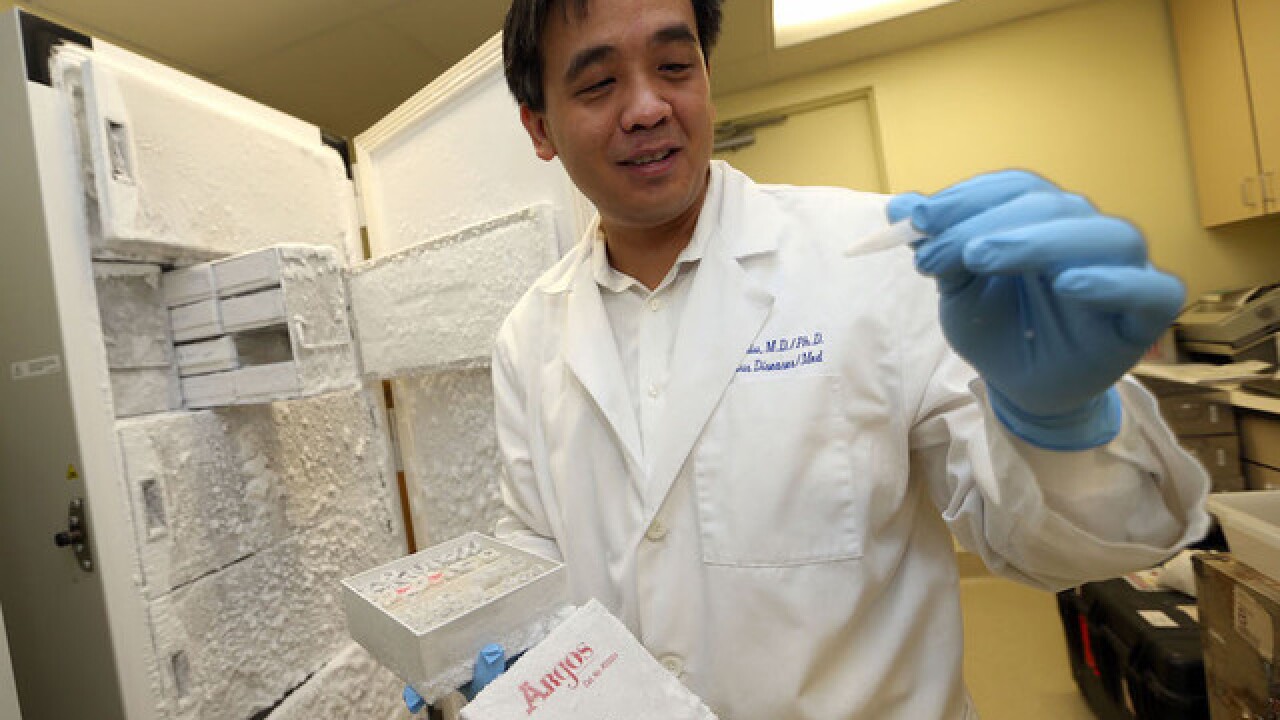 Tribune News Service
&lt;p&gt;Dr. Charles Chiu, director of the University of California at San Francisco's Abbott Viral Diagnostics and Discovery Center at China Basin, holds a sample vial similar to the vials used to hold samples of genetic material from the Ebola virus in San Francisco, on October 23, 2014. Chiu is studying the genetic code of the Ebola virus. &lt;/p&gt;

Tiny vials of inactivated Ebola virus from Africa are coming into a San Francisco lab, carrying secrets that might reveal the killer's past -- and fateful future.

So far, 30 samples have been genetically deciphered at the University of California, San Francisco by Dr. Charles Chiu and his team, who are searching for any pattern of change that forebodes a worsening of an epidemic that has claimed at least 4,400 lives in its most recent outbreak in Africa.

They have found no evidence of genetic changes -- mutations -- that could make the virus airborne or more deadly, said Chiu. Nor are there signs that it is weakening, which would make it less lethal but more burdensome. If Ebola killed more slowly, or just profoundly sickened people, victims would live longer and infect more people, and the disease would spread more widely.

But it is critical to monitor its speedy evolution, he said.

"If the outbreak is allowed to continue," said Chiu, director of the university's Viral Diagnostics and Discovery Center, "there may be mutations that affect our ability to diagnose and treat the virus and its virulence and transmission."

As Ebola spreads, Chiu hopes to be close behind.

"It is really important," he said, "that we generate and disseminate our data as soon as possible."

Scientists have long been able to test for a pathogen and then scrutinize its genes.

But the standard approach has taken far too long -- until recently -- to elicit useful information during a swiftly developing epidemic.

Chiu's lab, on UC's Mission Bay campus, uses a new and much faster technique to sort through millions of gene fragments and compare them with sequences stored in online databases.

Samples of the dead virus, members of the "DRC Ebola Zaire" strain, arrive in sealed "bio-safe" envelopes from Sierra Leone, Liberia and the Democratic Republic of Congo. They are safe because they have been killed with a chemical solution that breaks down proteins.

They are stored in metal boxes in freezers, kept at minus-112 degrees Fahrenheit. For added protection, only two people in the lab know their precise location in the freezers.

Chiu's team extracts viral genetic material and feeds it into the powerful sequencing machines that spell out the order of nucleotides that make up an organism's DNA or RNA.

A Harvard and MIT-based genetic analysis of samples from the same Ebola species but a different strain, published in the journal Science last August, found mutations, some of them considered significant. It also concluded that the epidemic began with a single independent transmission to a human, probably from a bat.

Chiu's goal is to track the evolution of the virus from the very beginning of the outbreak.

It's too early to announce his specific findings, but he hopes to soon make them public, posting the sequences online for study by laboratories around the world.

"The monitoring of the evolving nature of viruses is key to being able to track the changes that could affect the disease manifestation," said famed epidemiologist Dr. Don Francis of Global Solutions for Infectious Diseases, who is not involved in Chiu's work.

"It is very, very important if you are thinking about vaccines and diagnostics," said Francis, who worked on the Ebola outbreak in Africa in the late 1970s, as well as smallpox, cholera and HIV epidemics. "You can look at the sequence and figure out the genes that code for important parts of the virus."

Arriving in his lab by 7 a.m. and often staying until 8 p.m., Chiu is driven by his curiosity about the paradoxical nature of viruses.

"Viruses are fascinating because they are very simple organisms. Yet they cause such devastating disease. And we have so few therapies," said the researcher, who has degrees from UC Berkeley, UCLA and UC San Francisco. "But a virus is a very efficient replicating machine. It is engineered for maximal replication," churning out up to a billion copies in a quarter-teaspoon of blood.

They outrace the body's immune system. And they're not controlled by antibiotics.

Their quick copying is fraught with errors, delivering lots of variation, and this variation allows them to evolve quickly, jumping from wild animals to humans. Mammals are estimated to harbor more than 320,000 viruses, most of them poorly understood.

Chiu dreams of the day when such threats are detected before they infect us and an Ebola tragedy can be averted.

"What mutations are needed to permit a virus to jump?" he asked. "We don't yet know."