All wasps are scary, but this one is definitely the scariest 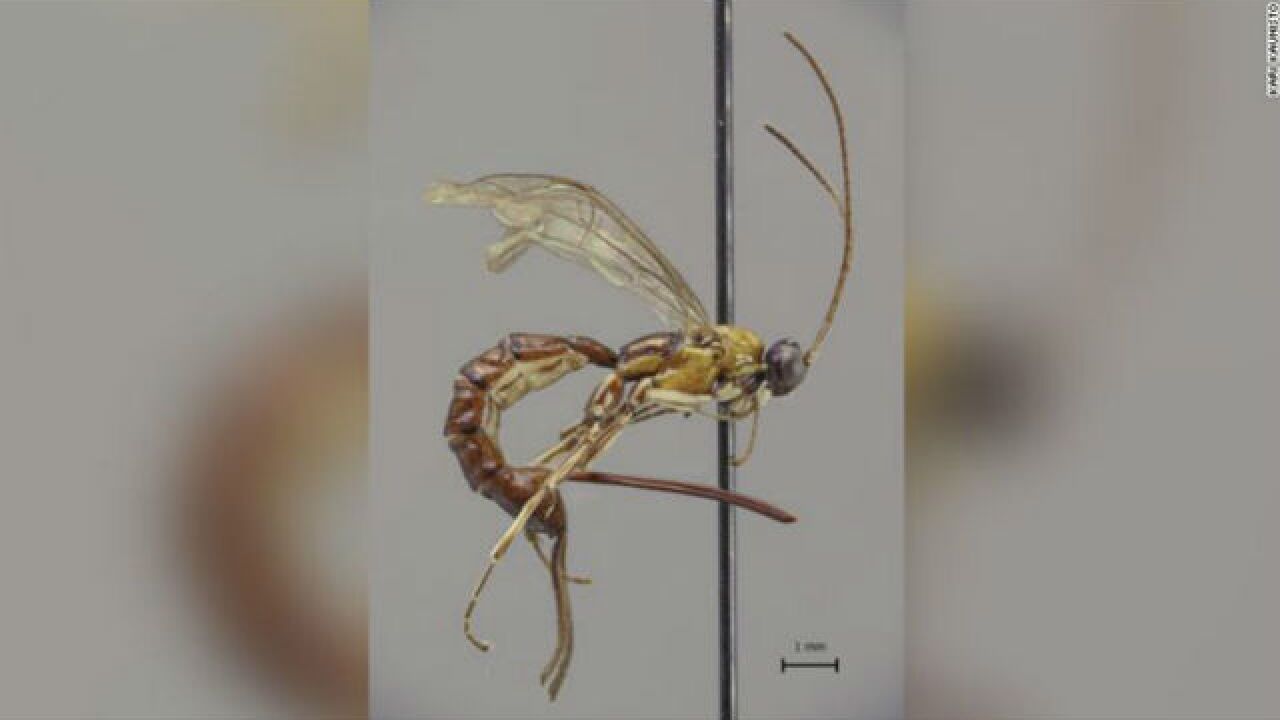 © 2018 Cable News Network, Inc.
CNN
<p>Ilari E. Sääksjärvi, a professor in the biodiversity unit at the University of Turku, told CNN he and his team discovered the <em>Clistopyga crassicaudata, </em>technically a parasitoid wasp, from a group of samples recovered from Peru.</p>

Have you ever seen a wasp and thought, "Gee, I wonder how we can make these non-pollinating, human-hating demon insects even worse?"

If so, you're in luck. A group of scientists from the University of Turku in Finland have discovered a new species of wasp, and it is basically a tiny supervillain that sports an almost comically massive stinger. You can see it in the photo above, protruding straight out from the otherwise normal-looking wasp body.

Ilari E. Sääksjärvi, a professor in the biodiversity unit at the University of Turku, told CNN he and his team discovered the Clistopyga crassicaudata, technically a parasitoid wasp, from a group of samples recovered from Peru.

Here's where things get even more interesting: Clistopyga stingers aren't just for stinging. They're also for stunning and killing spiders as incubation hosts, wrapping them up in their own webs, and injecting them with wasp eggs. So those giant stingers are poison darts, ovipositors, crochet needles, battering rams and bayonets all in one.

"The biology of the Clistopyga genus is very interesting," Sääksjärvi says. "So, the wasp uses the ovipositor [stinger] for injecting venom to the spider host and as a felting needle. The new species has a huge stinger and I think -- this is only a hypothesis -- that it could also use it, as a kind of crowbar, to enter some holes in the tree surface etc, in order to reach the spider hosts. But as said, this is only a guess."

How big is it?

There are plenty of parasitoid wasps who engage in this demented behavior. But the Clistopyga crassicaudata is different because of the sheer size and girth of its stinger.

"The stinger is very interesting (in comparison with other parasitoid wasps) as it is not only long, which is usual in parasitoid wasps, but also very wide and thickened apically. This is rare," Sääksjärvi says.

CNN asked Sääksjärvi how big, hypothetically, the Clistopyga crassicaudata's stinger would be if the wasp were the size of the average human man. For science.

"It would more than 50 percent of the body length," he said.

While there are hundreds and hundreds of fascinating and frightening types of wasps out there, Sääksjärvi says any scientific discovery that attracts public interest is an opportunity for increased awareness and education.

"All new species are interesting for an entomologist of course," he says. "However, I hope that with these interesting new species, which are highly different in comparison with other species, we can draw attention to the little known but extremely vulnerable habitats or ecosystems where they live. We hope that these finding can be of use, [for example] in the conservation of these areas."