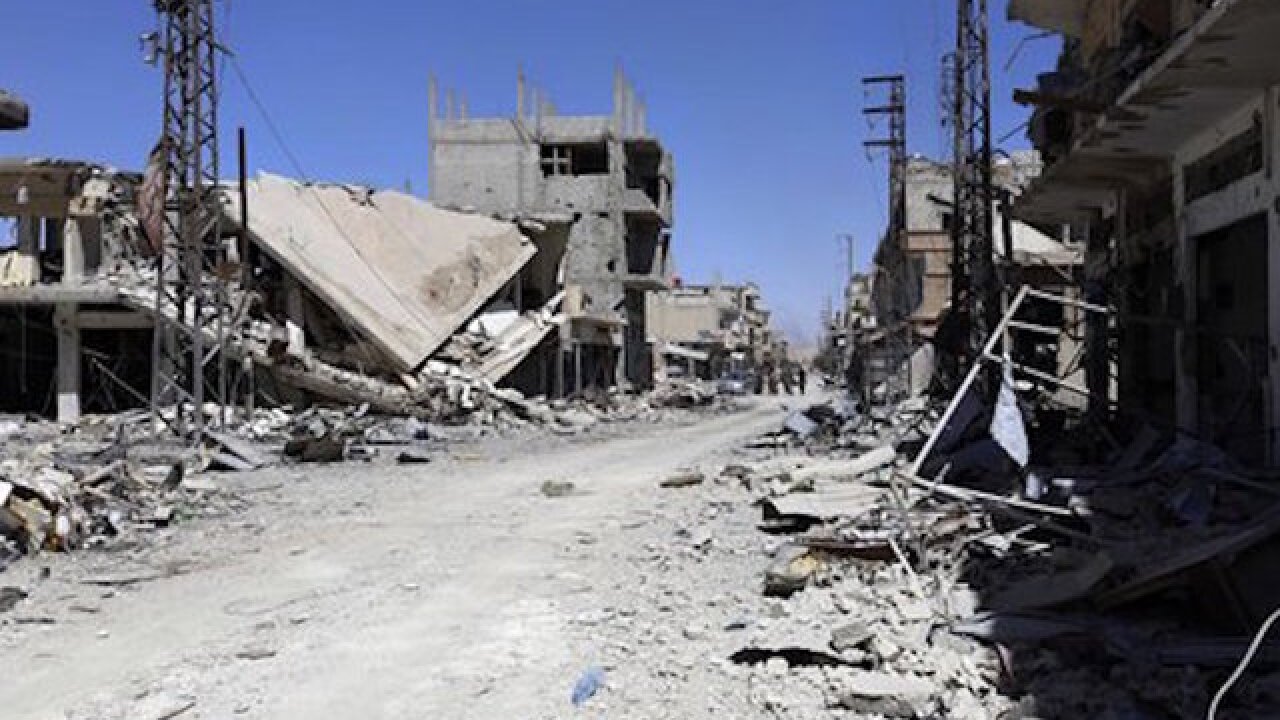 Uncredited
<p>Ruins are seen at al-Qaryatain city in the central city of Homs, Syria on Monday, April 4, 2016. Syrian troops and allied militiamen pressed on with an offensive against Islamic State militants in central Syria on Monday, clashing with the extremists around the town of Qaryatain a day after it was captured by pro-government forces. The Obama administration says Iran is drawing down its elite fighting force from Syria, yet Iran is still taking casualties and Tehran said Monday it has dispatched commandos to the war despite a partial cease-fire that took effect a month ago. (AP Photo)</p>

BEIRUT (AP) — Syrian government forces and rebels clashed across the north on Sunday in the latest indication that a monthlong cease-fire may be breaking down, as the Islamic State group seized two villages along Syria's border with Turkey from other insurgents.

Syrian rebels advanced on government positions in the Turkmen Mountains of the northwest Latakia province, a stronghold of President Bashar Assad, according to the Britain-based Syrian Observatory for Human Rights, which relies on activists inside the country.

A coalition of Islamist and non-Islamist factions led by the jihadist Ahrar al-Sham, alongside al-Qaida's Syrian affiliate, the Nusra Front, seized the village of Baydaa as heavy fighting continued throughout the day, the Observatory said. The Local Coordination Committees, another activist group, confirmed the advance and said nine government soldiers were killed.

The advance builds on a week of heavy fighting that has raised concerns about the durability of a U.S. and Russia brokered "cessation of hostilities" that took effect in late February, bringing relative calm to much of the country. The Nusra Front and the Islamic State group are excluded from the cease-fire.

Rami Abdurrahman, head of the Observatory, said fighting is intensifying on all fronts around the northern city of Aleppo, adding that it "definitely" threatens the cease-fire.

The Observatory said at least 35 fighters died in clashes Saturday night and early Sunday south of Aleppo, where opposition groups led by the Nusra Front seized the village of al-Ais eight days ago, killing dozens of government troops and allied militants from the Lebanese Hezbollah group.

The IS group has meanwhile launched a major offensive along the border with Turkey, seizing two villages near al-Rai, a border town it lost to the Western-backed Free Syrian Army on Friday. IS militants seized Sheikh Reeh and al-Bal on Sunday, the Observatory said.

The extremists set off seven bombs around nearby Marea and other villages and towns, according to the activist-run Azaz Media Center, based in a northern town of the same name, which called it the fiercest IS offensive in a year.

Abdurrahman said IS is on the offensive to protect its stronghold in nearby Dabiq. The town has great symbolic importance to the extremists, who believe medieval prophecies that it will be the site of a doomsday battle against infidels.

Airstrikes around the Syrian city of Raqqa, the de facto capital of the IS group's self-styled caliphate, killed dozens of militants and civilians Sunday, monitoring groups said.

Raqqa Is Being Slaughtered Silently, a group of activists that maintains contacts in the city, said a notorious IS judge, Fawaz al-Hassan, was among those killed. Hassan, also known as Abu Ali al-Shari, had been kicked out of the group over his extreme legal interpretations but was later brought back into the fold to frighten potential defectors, the group said.

The Observatory said three leaders and 21 other militants as well as 8 civilians died in the strikes, while Raqqa is Being Slaughtered Silently said 20 civilians were killed and over 50 wounded.

Russia, Syria, and a U.S.-led international coalition have been bombing IS for months. It was unclear who was behind Sunday's strikes.