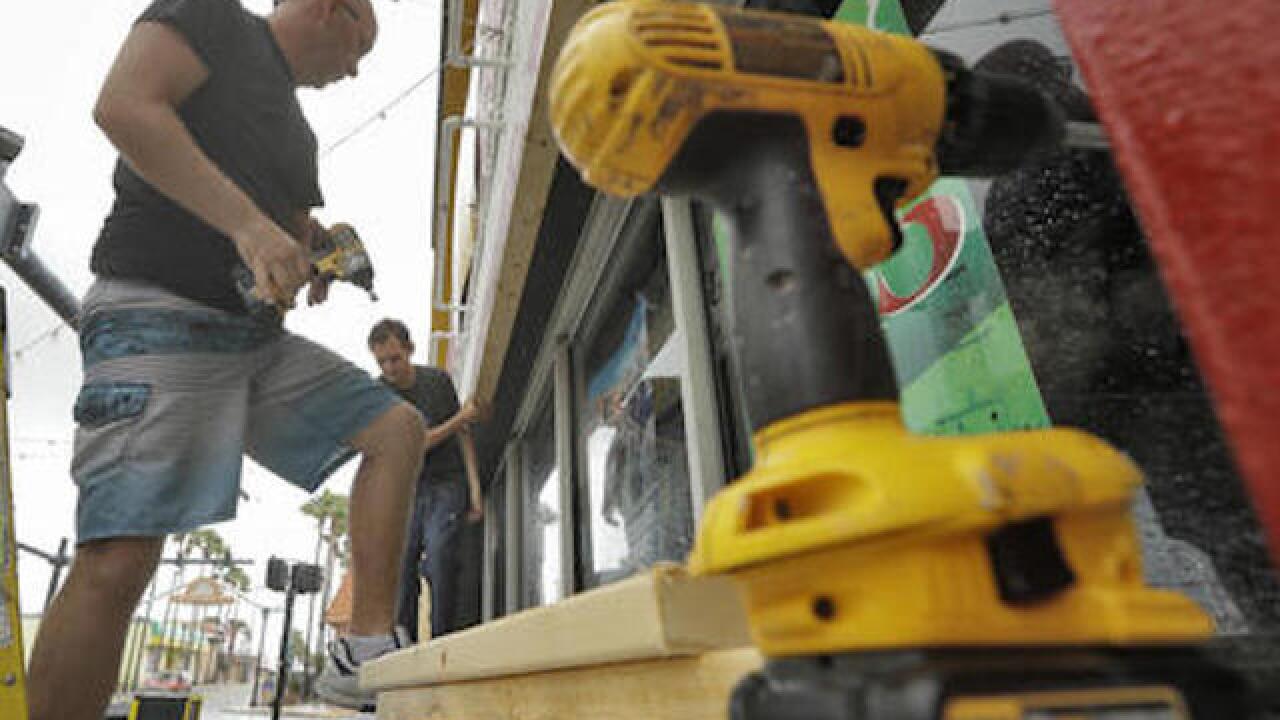 Copyright Associated Press
Chris O'Meara
<p>Michael Blackman, left, and Sam Titus board up a bar a few blocks off the beach Thursday, Oct. 6, 2016, in Daytona Beach, Fla. Hurricane Matthew continues to churn its way toward Florida's east coast. The bar is planning on staying open during Matthew. (AP Photo/Chris O'Meara)</p>

TALLAHASSEE, Fla. (AP) — Like thousands of other Americans, Donald Trump and Hillary Clinton scrambled their plans Thursday in Florida, where Hurricane Matthew threatened to wreak havoc on efforts to comb the state for votes in the campaign's final stretch.

The ferocious storm barreling toward the coast, the Clinton campaign moved staff and out-of-state volunteers working on the east coast of Florida to hotels and other housing inland and was closing all offices in the affected areas until safe to return, the campaign said. Sensitive to being seen as trying to capitalize on the storm, the campaign temporarily pulled its ads running on local Weather Channel stations in Florida.

The Trump campaign scrapped plans to hold a rally farther up in the coast in North Carolina, and canceled a Florida event featuring Trump's daughter, Ivanka.

Trump offered prayers for those in the path.

"Hoping the hurricane dissipates, but in any event, please be careful," the Republican tweeted.

Far away, both candidates continued to prepare for their second debate, a town hall-style faceoff on Sunday. Trump was to holding his own town hall Thursday in Sandown, New Hampshire, an event that could serve as a dry run. Clinton was to hold fundraisers in New York.

Along the Southeast coast, the Category 4 storm, carrying winds up to 125 mph, was likely to bring dangerous conditions to Georgia, South Carolina and, possibly, North Carolina. But its impact on delegate-rich Florida was what had the campaigns on high alert. The state is a must-win for Trump and an intense battleground for get-out-the-vote operations.

Vote-by-mail ballots are being sent to voters across the state this week, leaving the potential for ballots to arrive just as voters temporarily abandon their homes. So far, a record 2.5 million people — nearly one-third of those who voted in 2012 — have made requests for the early ballots.

The timing of the storm raised questions about how the campaigns will handle problems from mail-in ballots that haven't been received, as well as whether local officials will seek an extension of the Oct. 11 voter registration deadline.

Officials said they were hoping that any disruption to voting this time would be less severe than what occurred with Superstorm Sandy, which struck New Jersey and New York in the week before the 2012 presidential election and kept many voters away from polls.

At least half of Florida voters typically cast ballots early, either by mail or in person, compared with just a fraction in New York and New Jersey.

Neither New York nor New Jersey comes anywhere close to Florida's stature when it comes to this year's presidential campaign. Candidates and outside groups are on track to spend $11 million this week on television advertising in the state — the most in any week of the general election, according to Kantar Media's political ad tracker. They're set to continue big spending next week, with $8.4 million on deck.

As of Thursday morning, neither campaign had announced plans to pull down ads because of the storm, although that could change quickly. Florida Power & Light estimates 1.2 million customers could lose power, leaving campaigns little reason to waste money in some markets.

In one of the markets expected to take the brunt of the storm, Miami, planned spending is unchanged this week and next, Kantar Media shows.

The storm posed unusual challenges and opportunities for the candidates, particularly Trump, who is trying to prove his leadership.

The New York businessman has sometimes appeared clumsy in his response to crises — including sending out tweets in which he seemed to pat himself on the back for predicting terror attacks.

In the aftermath of the flooding in Louisiana earlier this year, Trump and his running mate, Mike Pence, rushed to the Baton Rouge area to tour the floor damage. During the trip, Trump criticized the president and later Hillary Clinton for failing to do the same, despite request from local officials to steer clear.

Both campaigns canceled events in Florida. President Barack Obama had planned to campaign for Clinton in Tampa on Wednesday.