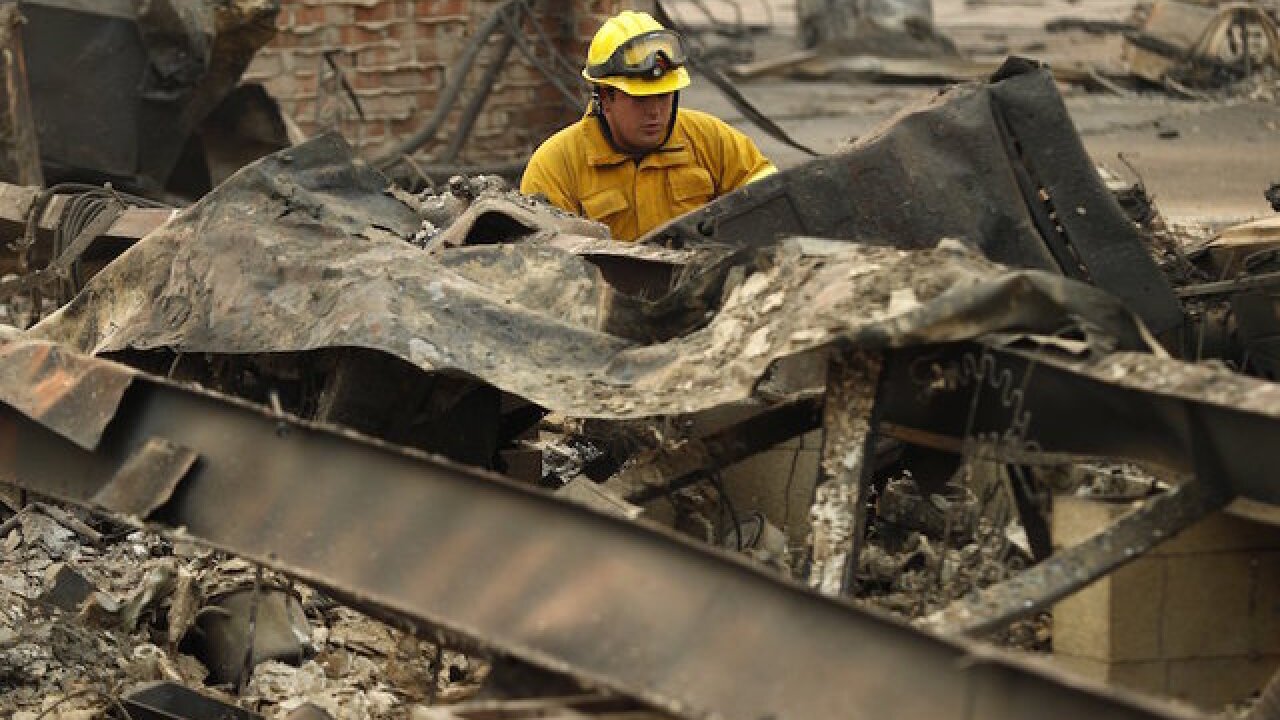 An additional 13 sets of human remains were discovered Monday in Northern California, bringing the death toll from the Camp Fire to 42, making it the deadliest wildfire in the state's history, the sheriff of Butte County said.

The increased death toll comes as first responders continue battling blazes on both ends of the state, bringing the statewide toll to 44.

They are fighting fierce winds to contain the Woolsey Fire and save lives and homes in populous Southern California. Meanwhile, harrowing stories of nightmarish escapes from burning homes and cars are trickling out of the rural northern part of the state, where firefighters made progress Monday in containing the Camp Fire, which also is the most destructive fire in state history.

The Camp Fire struck in and around the town of Paradise. Resident Nichole Jolly said she thought her life was over as flames surrounded her car, filling it with smoke. Then, she called her husband, who pleaded with her to run, she said.

"He said don't die, run. If you're going to die, die fighting. You have to run," she said, recalling his words.

In some areas of the state, rescue efforts have turned into cleanup and recovery as residents return to what's left of their gutted homes in neighborhoods littered with charred remains of cars, trees and buildings. President Trump on Monday approved a request for a Major Disaster Declaration that will provide the state with federal resources.

A Malibu resident who has lived through many wildfires said she has never seen one touch so many parts of the city at once.

"Every community neighborhood has been devastated," the woman told  CNN affiliate KCAL/KCBS .

Latest developments by the numbers

• Woolsey Fire: In Southern California, 57,000 structures are threatened by the Woolsey Fire. It has burned more than 91,000 acres, killed two people and destroyed at least 370 structures. As of Monday, it was about 20% contained.

What the reports say

California state regulators are investigating two utility companies that reported incidents close in time and location to the start of the Camp and Woolsey fires.

Preliminary incident reports submitted last week to the Safety and Enforcement Division of the California Public Utilities Commission provide a glimpse of conditions near the origins of the deadly blazes. Both utilities say they are cooperating with state investigators.

Camp Fire has obliterated 6,453 homes and 260 other structures since it began Thursday morning near the town of Pulga. PG&E's  report  says it experienced a transmission line outage about 1 mile northeast of Pulga nearly 15 minutes before the Camp Fire began.

In Southern California, where the Woolsey Fire began Thursday afternoon in unincorporated Ventura County, SoCal Edison  reported  that a circuit relayed out of the Chatsworth Substation about two minutes before the blaze broke out. The incident location in the report appears to be the same as CalFire's  location  for the fire's origin. But it's not clear how close they actually are to each other.

SoCal Edison's report says, "at this point we have no indication from fire agency personnel that SCE utility facilities may have been involved in the start of the fire."

A CPUC spokesperson said the agency will incorporate the incident reports into its staff investigations to assess the compliance of electric facilities with applicable rules and regulations in areas affected by the fires.

Residents displaced with no end in sight

More than 300,000 people have been forced from their homes statewide. The majority of those residents are in Los Angeles County, where 170,000 were evacuated.

The evacuees included  celebrities who lost their homes  in Malibu as well as  first responders  who are setting aside their grief to save others.

Colusa Police Sgt. Jarrod Hughes told KTXL that his Paradise home had been destroyed in the blaze. But he still put on his uniform and returned to work once he got his son to safety.

"It's my community, it's where I grew up. It's something I absolutely had to do," Hughes said. "There was no question about it. It was get my family to safety so I can get in and get back up there and help everybody else."

While much of Malibu lies in ruins, the city's mayor pro tem, Jefferson 'Zuma Jay' Wagner, is recovering in a hospital after trying to save his home.

The Rocky Peak Fire has burned about 20 acres, officials said. The nearby Lynn Fire has scorched about 15 acres. While structures are threatened, firefighters expect to contain that blaze soon, Ventura County Fire Chief Mark Lorenzen said.

Officials are hoping those people are safe elsewhere, perhaps at friends' houses. But with wildfires still burning, the death toll could rise.

So far, 29 bodies have been recovered from homes and vehicles in or near Paradise. In Southern California, officials said two deaths in Malibu were related to the Woolsey Fire, bringing the statewide death toll to 31.

Authorities are bringing in additional resources to expedite search and

"In some cases, the only remains we are able to recover are bones or bone fragments," Honea said.

Paradise Mayor Jody Jones is living in a motor home after losing her house to the Camp Fire. She has a roof and a bed but it won't work for much longer, she said. "We're thinking about where to go next."

She, too, recalled fleeing her home in her car surrounded by flames so intense that at times she could feel the heat in her car. Trees and telephone poles were up in flames.

While the blaze no longer appears to pose a direct threat to Paradise, Jones is concerned about marshaling resources for cleanup and recovery so people can return to what's left of their homes.

"My biggest concern is do we have the resources to clean up debris and get safety hazards out of the way so people can get to their property ASAP."