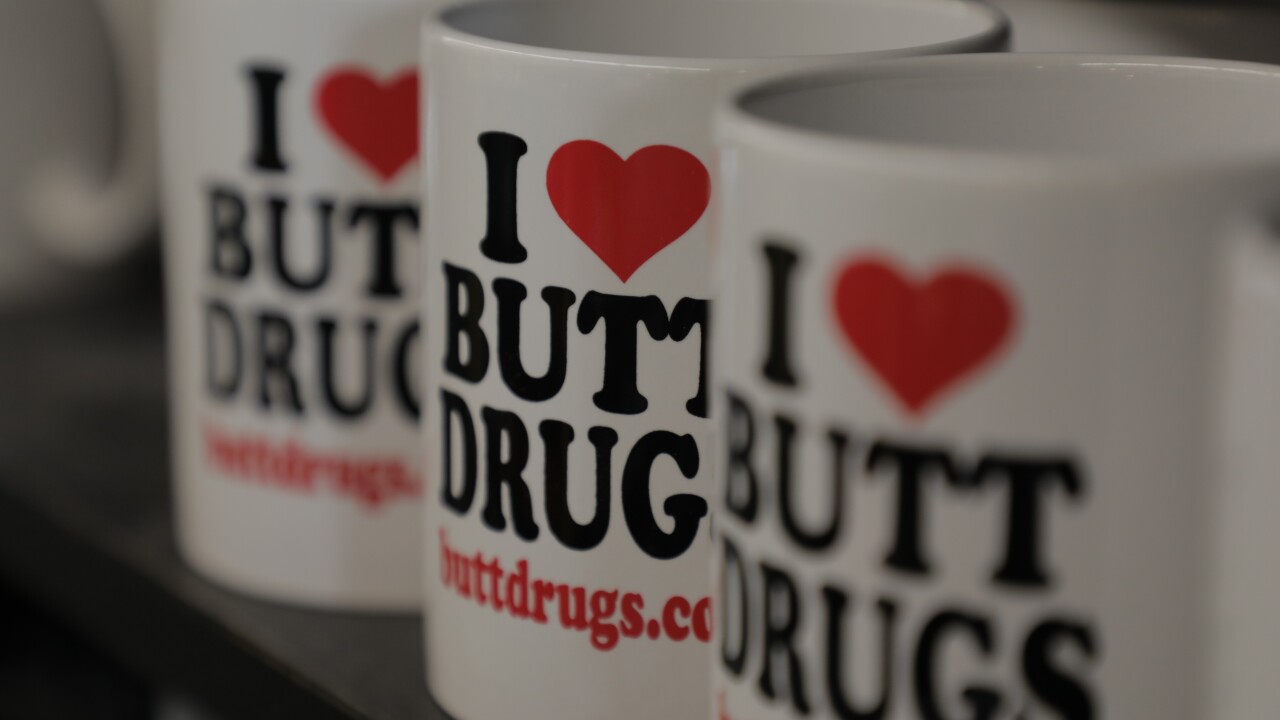 Welcome to Corydon: a small town in southern Indiana, just over the border from Kentucky.

“It’s really dull most of the time, so it’s important to have these local flavors," said Alexander Laske, who lives in town.

They’re known for a few things. The site of the original capital of Indiana, a small skirmish in the civil war — and Butt Drugs.

“We all definitely heart our Butt drugs, they have a lot of fannies,” Laske said.

Butt Drugs is probably not what you think it is. It’s an old-fashioned pharmacy, owned by Katie Butt-Beckort. She’s the third-generation Butt to run the place.

Katie’s grandfather, William “Blackie” Butt, opened the store in 1952. It’s a full-service pharmacy with an old-fashioned soda counter and they sell 35-cent coffee. The name is just the cherry on top.

“I try to know everyone’s name, yes, and I try to learn it by the second or third visit,” said employee Katie McGraw.

Believe it or not, in town, the name isn’t their biggest draw. It’s the store’s priority on family friendly service. Katie McGraw works the front and she knows which customers like their bags stapled and which ones don’t.

And It really is a family affair. Katie’s mom, Julie McGraw, has been a pharmacy tech for Butt’s for more than 25 years.

That family atmosphere has paid off. The independent pharmacy fills more than 2,000 prescriptions a week. Which helps stave off the competition.

“We have a CVS, a Walgreens and a Walmart all within a mile and a half of here. And they’ve been here for years,” said Butt-Beckort.

While the family friendly store has held off the big brands, it still finds its more risque side.

“Yeah so she had a good base, we had t shirts, we had the classic 'I love Butt Drugs.' I mean that’s been a cornerstone for years,” said Trista Melton, who runs the drugstore’s marketing.

While they were embracing their name before, the pharmacy is really turning it into an opportunity.

“I think my best thing is making the Butt Liquors logo,” Melton said.

“We’ve always sold liquor. People say, 'oh, well you just started selling liquor. ' No, we’ve had a three-way license for years, but we renamed that department Butt Liquors. Because we can,” said Butt-Beckort.

“We took some things that have always been big here, like free parking in the rear," Melton said. “Funny, but you know, also real. Used to (be) you had to pay to park in downtown Cordyn, it was like $10, that was a big deal.”

And customers, whether from town or tourists, love it.

“Everyone loves Butt Drugs,” one customer said in the store.

So much so, that they can’t keep merchandise on the shelf.

“I mean, we have to order shirts in every single week, we cannot keep them in stock,” Melton said.

And the online store keeps things moving for those who can’t make it to Indiana.

That makes everyone — from the employees to the owner — proud to work at Butt Drugs.

“If I go out and meet new people and they ask where I work, I’m always proud to say it — Butt Drugs — and get a little bit of a look like, 'what did you say?' ” McGraw said.

“Really, you know there’s a lot of people with the last name Butt in this world, I think we might be the only Butt Drugs though,” Butt-Beckort said.