Boy killed in school shooting honored as a superhero 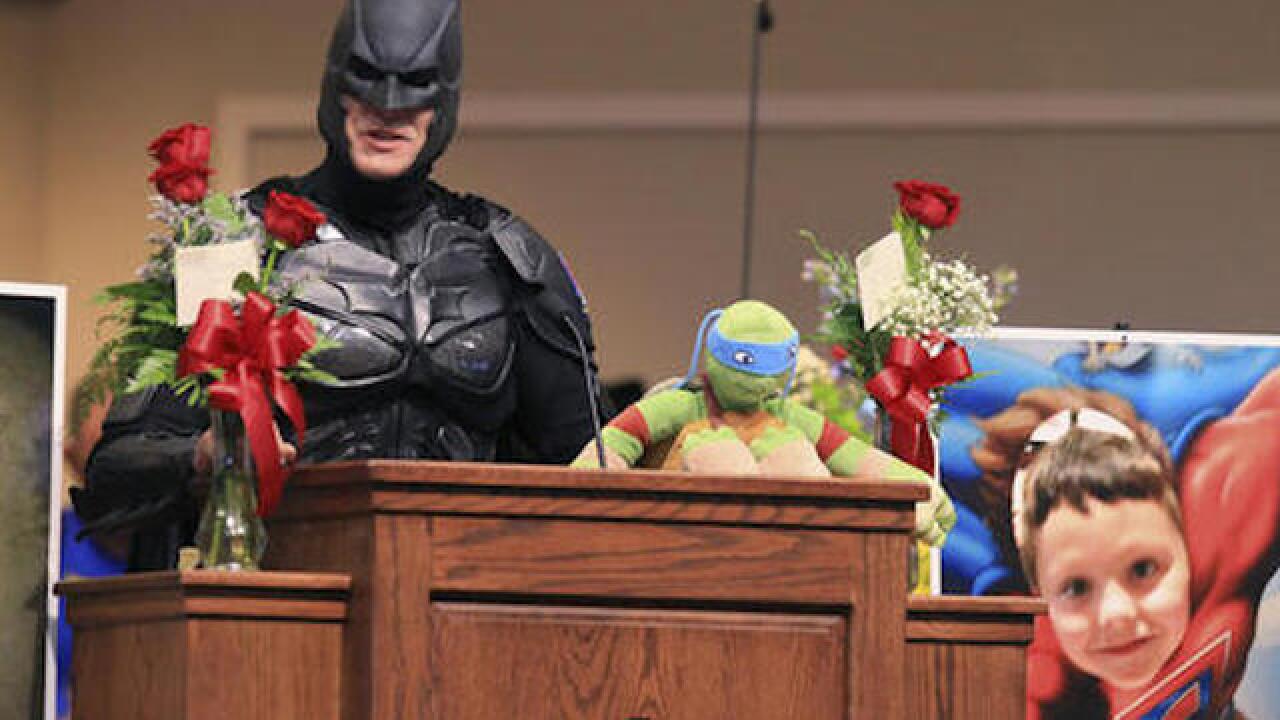 Ken Ruinard
<p>John Buckland, of Huntington W.V., dressed as Batman, speaks during a superhero-themed funeral service for his brother, Jacob Hall at Oakdale Baptist Church on Wednesday, Oct. 5, 2016, in Townville, S.C. A 14-year-old boy killed his own father, then drove to Townville Elementary and fired on two children and a teacher as recess began. Jacob died Saturday. (Ken Ruinard/The Independent-Mail via AP, Pool)</p>

TOWNVILLE, S.C. (AP) — Six-year-old Jacob Hall was dressed as Batman for his funeral on Wednesday, and many of his estimated 1,500 mourners appeared as superheroes to honor the school shooting victim.

The first-grader's mother, choking back tears, wore a Robin costume.

Jacob's family had asked mourners to celebrate the boy's life by dressing as the superheroes he loved, and so they did. Captain Americas and Wonder Women filed past his small blue casket, along with Supermen and Supergirls, Teenage Mutant Ninja Turtles and Power Rangers.

His teachers came in handmade blue capes with a Ninja Turtle face and Jacob's name.

Jacob loved to pretend he was a superhero, imagining himself as the good guy, the Rev. David Blizzard recalled. He encouraged mourners to honor his wishes by forgiving the 14-year-old boy charged with killing him at Townville Elementary School.

Blizzard also referred to the nine people killed in last year's church shooting inside the Emanuel AME Church in Charleston, reminding the crowd that their families forgave that shooter.

"We have the same Jesus that Mother Emanuel had, and we can do the same thing if we choose to," Blizzard said, because "a superhero story is about good versus evil. The good always wins. We live in a dark world, but the good's going to win."

Jacob died Saturday from a bullet that struck the main artery in his thigh. Authorities said the 14-year-old killed his own father, then drove to the school and sprayed gunfire. Jacob's classmate and a first-grade teacher also were struck by bullets, and were treated and released from a hospital. The teen faces charges of murder, attempted murder and weapons possession.

A capacity crowd of 500 squeezed into the church's sanctuary. Another 500 formed a standing-room only crowd in the gym and youth building, and 500 more waited outside the Oakdale Baptist Church.

A 6-year-old friend from church, Lily Gunby, wore a pink and black Superman shirt. She said Jacob "was really sweet," and "knew a lot about Jesus."

"Keep an eye on each other. Care about each other, love each other. If someone's in trouble, reach out and give them the help they need, because Jacob would," Buckland said.

Students won't return to Townville Elementary until Thursday. But the district's other five schools planned to honor Jacob by participating in Superhero Day, with all employees and students invited to come to school in costume. A Facebook page created for Superhero Day said schools across the state planned to participate, but in central and coastal South Carolina, schools were closed in advance of Hurricane Matthew

District Superintendent Joanne Avery also announced a moment of silence at 1:42 p.m. Wednesday, to mark one week since the shooting.