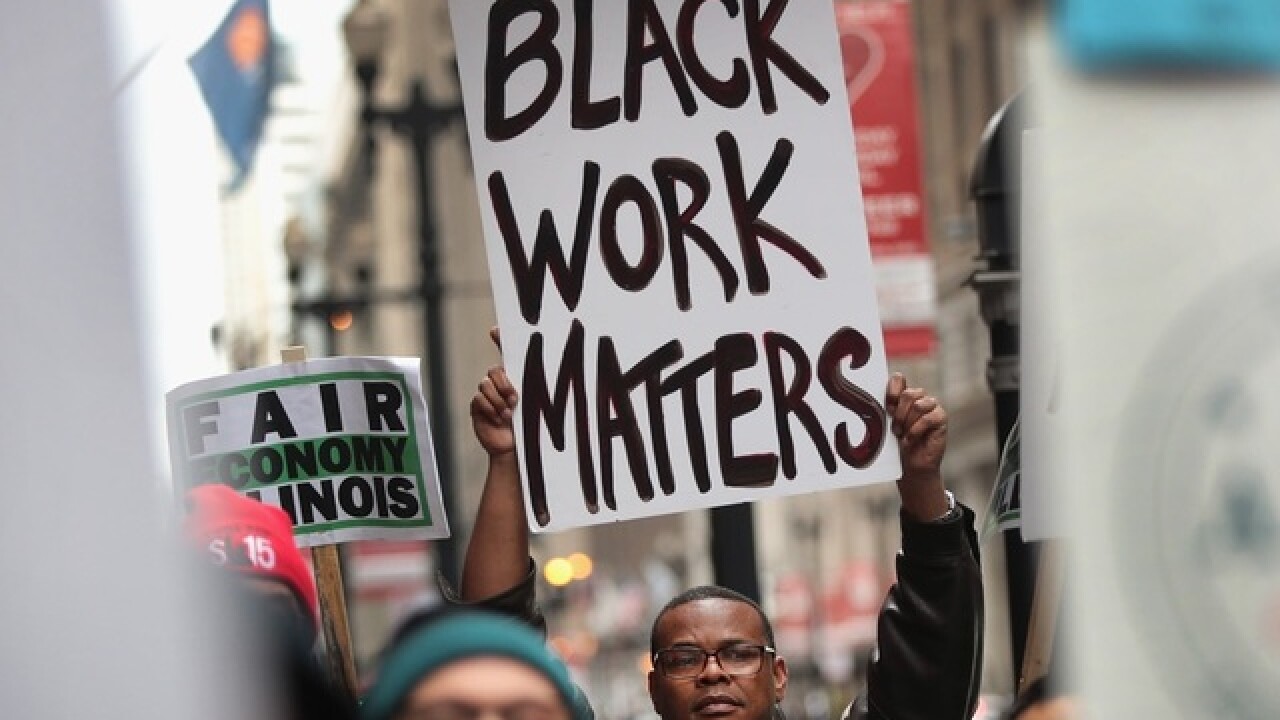 Image copyright 2018 Getty Images. All rights reserved. This material may not be published, broadcast, rewritten, or redistributed.
Scott Olson/Getty Images
<p>Demonstrators protest for higher wages and better working conditions on the 49th anniversary of the murder of Dr. Martin Luther King Jr. on April 4, 2017 in Chicago, Illinois. King, a clergyman and civil rights leader was killed in Memphis, Tennessee, on April 4, 1968 while in town supporting striking black city sanitation workers who had walked off their jobs to protest unequal wages and working conditions.</p> 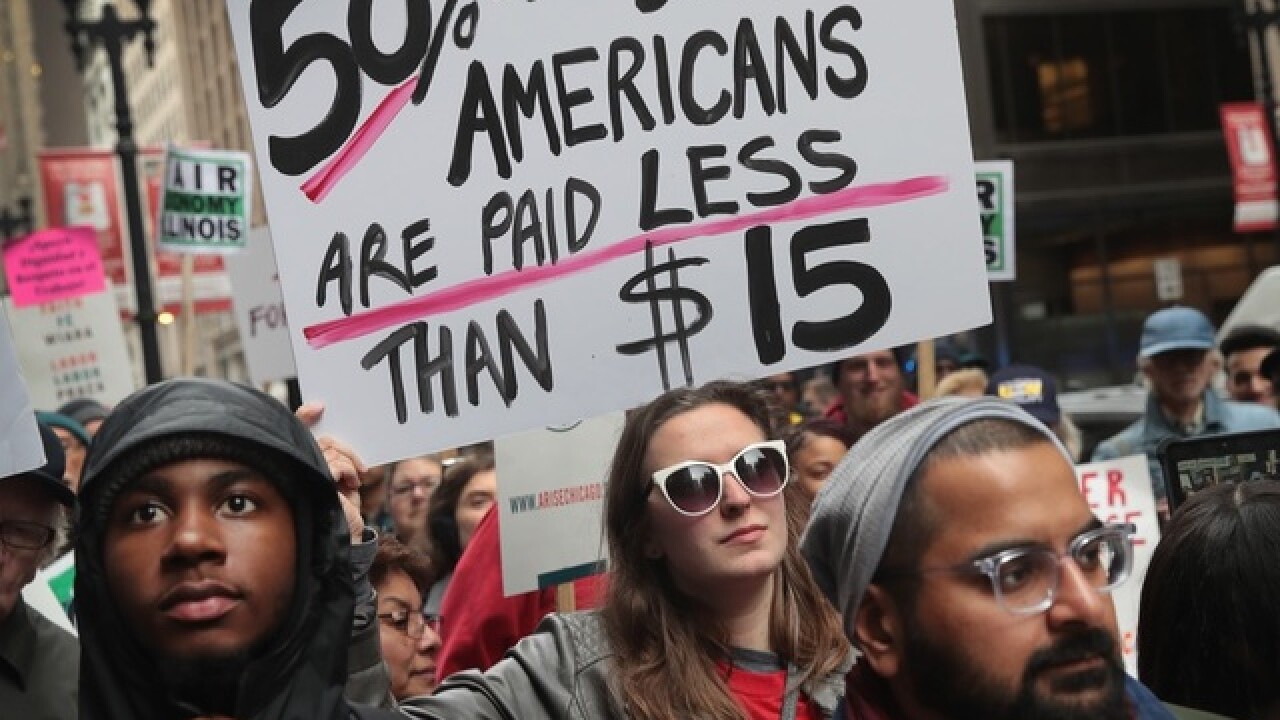 BOSTON — Jonathan Garland's fascination with architecture started early: He spent much of his childhood designing Lego houses and gazing at Boston buildings on rides with his father away from their largely minority neighborhood.

But when Garland looked around at his architectural college, he didn't see many who looked like him — there were few black faces in classroom seats, and fewer teaching skills or giving lectures.

"If you do something simple like Google 'architects' and you go to the images tab, you're primarily going to see white males," said Garland, 35, who's worked at Boston and New York architectural firms. "That's the image, that's the brand, that's the look of an architect."

And that's not uncommon in other lucrative fields, 50 years after the Rev. Martin Luther King — a leader in the fight for equal-employment opportunities — was assassinated.

RELATED: How has Martin Luther King Jr. inspired you?

An Associated Press analysis of government data has found that black workers are chronically underrepresented compared with whites in high-salary jobs in technology, business, life sciences, and architecture and engineering, among other areas. Instead, many black workers find jobs in low-wage, less-prestigious fields where they're overrepresented, such as food service or preparation, building maintenance and office work, the AP analysis found.

In one of his final speeches, King described the "Other America," where unemployment and underemployment created a "fatigue of despair" for African-Americans. Despite economic progress for blacks in areas such as incomes and graduation rates, some experts say many African-Americans remain part of this "Other America" — with little hope of attaining top professional jobs, thanks to systemic yet subtle racism.

The AP analysis found that a white worker had a far better chance than a black one of holding a job in the 11 categories with the highest median annual salaries, as listed by the Bureau of Labor Statistics. The ratio of white-to-black workers is about 10-to-1 in management, 8-to-1 in computers and mathematics, 12-to-1 in law, and 7-to-1 in education — compared with a ratio of 5.5 white workers for every black one in all jobs nationally. The top five high-paying fields have a median income range of $65,000 to $100,000, compared with $36,000 for all occupations nationwide.

In Boston — a hub for technology and innovation, and home to prestigious universities — white workers outnumber black ones by about 27-to-1 in computer- and mathematics-related professions, compared with the overall ratio of 9.5-to-1 for workers in the city. Overall, Boston's ratio of white-to-black workers is wider than that of the nation in six of the top 10 high-income fields.

Boston — where King had deep ties, earning his doctorate and meeting his wife — has a history of racial discord. Eight years after King's assassination, at the height of turbulent school desegregation, a Pulitzer Prize-winning photograph from an anti-busing rally at City Hall showed a white man attacking a black bystander with an American flag.

The young victim was Theodore Landsmark. He's now 71, a lawyer, an architect and director of Northeastern University's Dukakis Center for Urban and Regional Policy.

He said "structural discrimination" is the overarching cause of disproportionate race representation in high-paying fields. Landsmark and others say gains are elusive for myriad reasons: Substandard schools in low-income neighborhoods. White-dominated office cliques. Boardrooms that prefer familiarity to diversity. Discriminatory hiring practices. Companies that claim a lack of qualified candidates but have no programs to train minority talent.

Some also say investors are more likely to support white startups. When Rica Elysee — a lifelong Boston resident who grew up in predominantly black neighborhoods — brought her idea of an online platform linking beauty professionals with customers for in-home appointments to investors, she was shunned, she said.

"They said I didn't belong in the program, that they couldn't identify with it because they weren't black," said Elysee, 32, who initially marketed BeautyLynk to black women like herself. "I remember crying pretty harshly. They couldn't relate to what I was doing."

Some even advised her to move out of Boston, which had a booming innovation economy but was "not encouraging minorities in the tech space," she said. Three years later, Elysee said BeautyLynk is slowly growing but still needs capital.

Most American metro areas are like Boston, with AP's analysis showing that racial disparities in employment are indifferent to geography and politics. California's Silicon Valley struggles to achieve diversity in computer fields. In Seattle, home to Amazon, whites outnumber blacks nearly 28-to-1 in computer- and math-related fields. Financial powerhouse New York has a 3-to-1 ratio of white-to-black workers in all occupations, but nearly 6-to-1 in business and finance. Hollywood shows inequality in entertainment, with almost nine whites for every black worker.

In Atlanta, King's hometown, the proportional representation of black-to-white workers is close to even in many fields. Many reasons are cited. Atlanta has historically black colleges and universities such as King's alma mater, Morehouse; the first black mayor, Maynard Jackson, pressed for policies helping black professionals after his 1973 election; and events like the 1996 Olympics opened doors for entrepreneurs of all races.

Atlanta is an exception. For nearly all of the past half-century, black unemployment nationally has hovered at about twice that of whites.

President Donald Trump touted on Twitter that December's 6.8 percent unemployment rate for blacks was the lowest in 45 years — a number critics say ignores a greater reality. For example, in an economy that increasingly demands advanced degrees, Department of Education data shows that black representation among graduates in science, tech, engineering and mathematics peaked at 9.9 percent in 2010 and has been slowly declining.

In Boston, Democratic Mayor Marty Walsh said in a recent speech that the city is addressing the issue and is committed to placing 20,000 low-income residents in "good-paying jobs" by 2022.

Landsmark said stronger role models may be a solution. As Boston Architectural College's president, he mentored Garland. They discussed race issues in the professional world — as when Garland, trying to land jobs in his neighborhood, realized many people who looked like him were unfamiliar with the very concept of architecture. He once had to explain to a homeowner who wanted his roof reframed: "I'm not a builder, I'm an architect."

Today, Garland speaks at high schools and works at the DREAM Collaborative, which focuses on projects in low-income neighborhoods.

"I know the barriers exist in other folks' minds, and I have to disprove that," he said. "I keep myself focused on the issues."