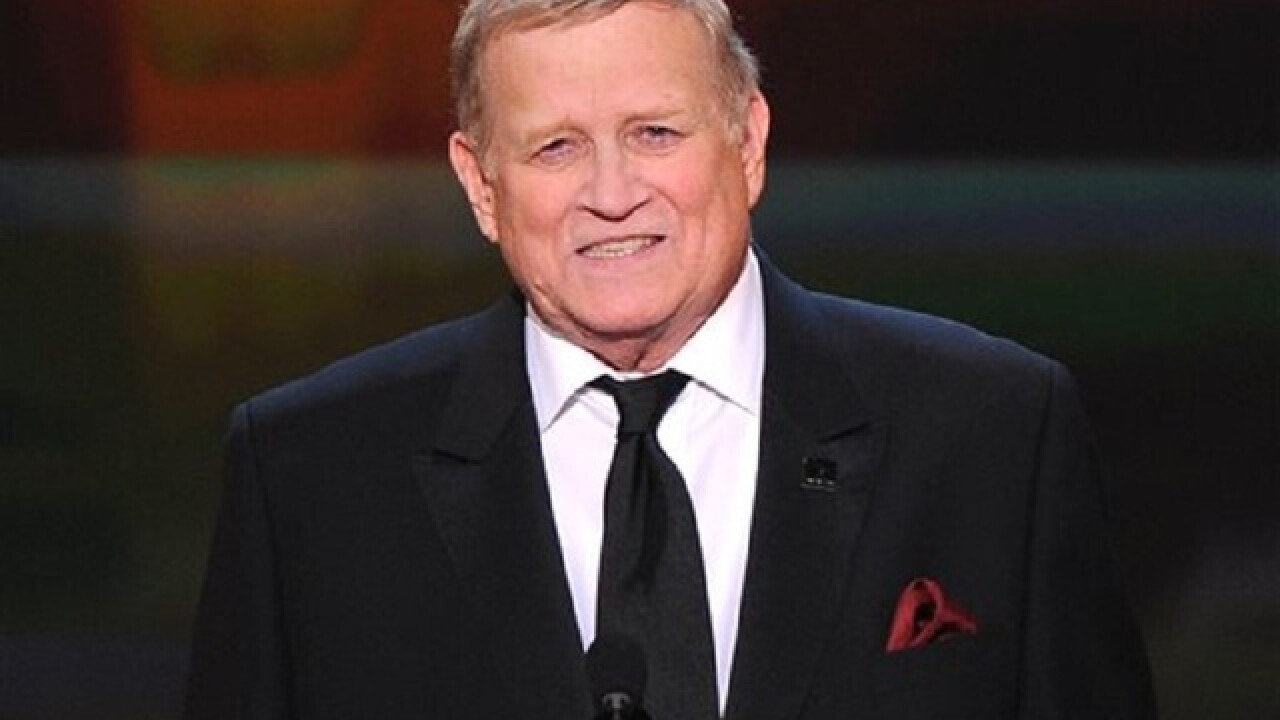 LOS ANGELES (AP) — Ken Howard, the strapping character actor who starred in the 1970s TV drama "The White Shadow" and was currently serving as president of SAG-AFTRA, has died at age 71.
The union announced Howard's death Wednesday. No cause was given.
Howard's career spanned four decades in TV, theater and film. In the acclaimed CBS series "The White Shadow," which aired from 1978-81, he starred as a white coach to an urban high school basketball team — a part, one of Howard's best known, that drew on the personal history of the 6-foot-6 actor, who played basketball growing up on Long Island in New York and at Amherst College.
The series' title came from Howard's nickname as the only white starter on the Manhasset High varsity team.
He was a staple character actor on television, starring opposite Blythe Danner in "Adam's Rib" on ABC in the 1970s and appearing as the chipper Kabletown boss Hank Hooper on NBC's "30 Rock" some 40 years later.
In early seasons of NBC's "Crossing Jordan," which premiered in 2001, he played the father of star Jill Hennessy, a retired police detective who gave behind-the-scenes advice to his daughter, a crime-solving forensic pathologist. He starred opposite Jimmy Smits in the 2007 CBS drama "Cane."
His other TV credits included "The West Wing," ''NYPD Blue," ''The Practice," ''Boston Legal," ''Law & Order: SVU," ''Curb Your Enthusiasm" and "The Office."
George Clooney recounted Howard's influence on him, writing in a statement that when he first met Howard on a studio lot in 1983, the actor wished him well and said he hoped they'd work together in the future. When Clooney told Howard he had an audition across town but only had a bike, Howard put Clooney's bike in his car and drove the aspiring actor to the other studio, Clooney wrote.
"I didn't get that audition, But I did get the chance to work with him years later. It was an honor," Clooney wrote. "Today his obituary read that he was six foot six, but he was so much taller than that."
Howard played Thomas Jefferson on Broadway in "1776," a role he reprised in the 1972 film. He won a Tony award for Robert Marasco's Catholic boarding school drama "Child's Play."
After making his film debut opposite Liza Minnelli in 1970's "Tell Me That You Love Me," Howard's films included "Rambo," ''In Her Shoes," ''Michael Clayton," and last year's Jennifer Lawrence starrer, "Joy." He won an Emmy for his performance in HBO's "Grey Gardens" in 2009.
He was also familiar to viewers of the Screen Actors Guild Awards, providing an update on the union's accomplishments during the televised awards ceremony.
Howard was elected SAG president in 2009 and was a catalyst for its 2012 merger with the American Federation of Television and Radio Artists union. Combined, the groups represent 160,000 actors, broadcasters and recording artists.
Howard was the first president of SAG-AFTRA and was re-elected to the post last year.
"Ken was a remarkable leader and his powerful vision for this union was a source of inspiration for all of us," SAG-AFTRA executive director David White said in a statement. "He was an exceptional person and we are deeply saddened by his passing. He had a remarkable career and he never forgot what it was like to be a working performer."
Paris Barclay, president of the Directors Guild of America, saluted Howard as an industry leader in working to protect the rights of performers.
"His strong leadership of SAG-AFTRA through the merger was an inspiration to our industry," Barclay said in a statement. "Above all, Ken was a man of integrity, honor, and unmatched spirit. He will be greatly missed."
He was born Kenneth Joseph Howard Jr. on March 28, 1944, in El Centro, California.
Howard is survived by his wife of 25 years, stuntwoman Linda Fetters Howard.
His first marriage was to actress Louise Sorel. His second wife was Margo Howard, the daughter of advice columnist Ann Landers. He had three adult stepchildren from a previous marriage.
Associated Press 2016