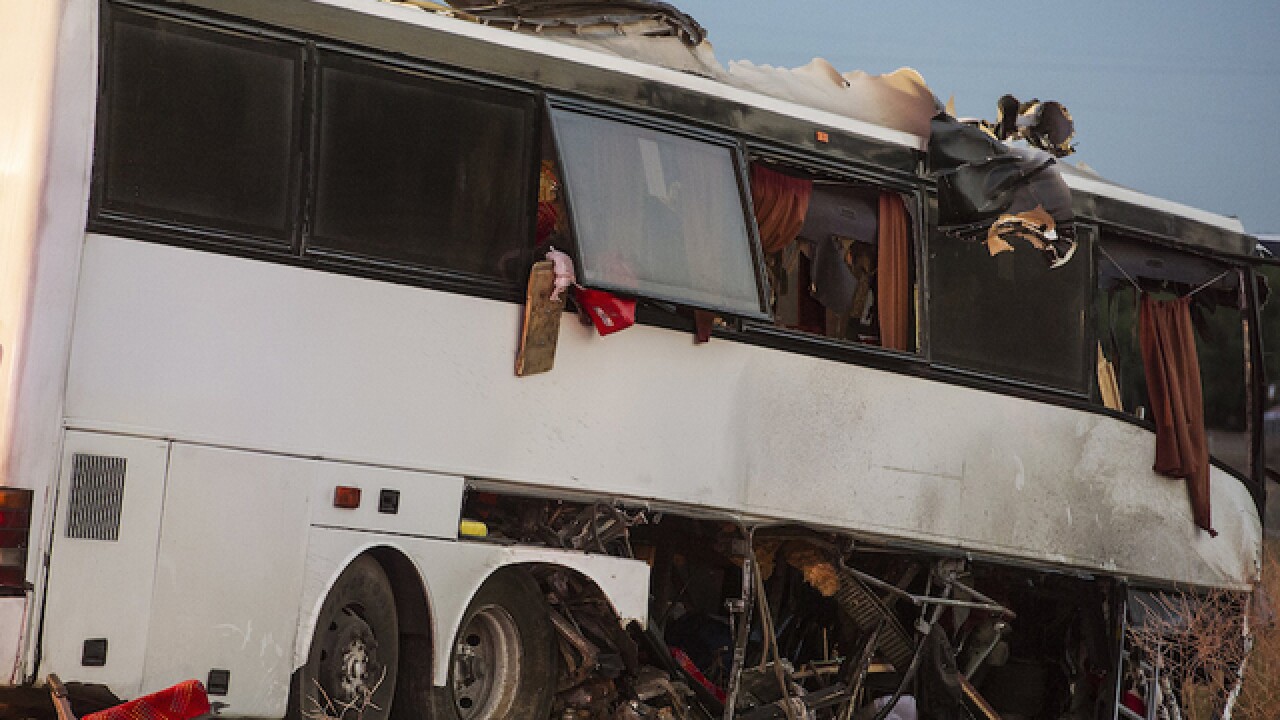 Andrew Kuhn
<p>The wreckage of a charter bus sits on northbound Highway 99 between Atwater and Livingston, Calif., Tuesday, Aug. 2, 2016. The bus veered off the central California freeway before dawn Tuesday and struck a pole that sliced the vehicle nearly in half, authorities said.</p>

ATWATER, Calif. (AP) — A charter bus veered off a central California highway before dawn Tuesday and struck a pole that sliced the vehicle nearly in half, killing five people and sending five more to hospitals, some with lost limbs, authorities said.

Rescuers pulled out "bags of body parts" from the survivors of the crash on State Route 99, where the speeding bus hit the pole of a highway exit sign head-on, Merced County Sheriff Vern Warnke said. It sheared straight through bus, stopping at the first rear axle "with a great impact," he said.

Emergency workers climbed in through the windows to pull out trapped passengers. Others were ejected and were lying in a ditch, Warnke said.

Five people were killed and at least five others were airlifted to hospitals, California Highway Patrol Officer Moises Onsurez said. He did not have information about any additional injuries or the cause of the single-vehicle crash.

"The pole went through the center of the bus, and that's where the injuries were sustained," Onsurez said.

The still-intact sign stuck out from the roof of the crumpled bus. Wreckage and debris including seat cushions, drink containers, pillows and a blanket were scattered in lanes and on the shoulder of the highway a few miles south of the town of Livingston.

Onsurez identified the driver as Mario David Vasquez of the Los Angeles area, the Merced Sun-Star reported. The 57-year-old was among those with major injuries and was airlifted to a hospital, the newspaper said.

The bus operated by Autobuses Coordinados USA was heading to Washington state and was due in Livingston at 1:30 a.m. to change drivers, Warnke said. The crash occurred shortly before 3:30 a.m. between the community of Atwater and Livingston, just a few miles down the highway.

Calls to various telephone listings for the company went unanswered. Its counter was open at a Los Angeles depot, but nobody was present when an Associated Press reporter arrived midmorning. A sign in Spanish advertised daily 7:30 p.m. departures to destinations up the West Coast to Washington.

The Federal Motor Carrier Safety Administration listed the carrier as having a "satisfactory" rating as of May 17. The bus was inspected in April and had three violations, including a lack of or a defective brake warning device. That violation was not further described, and there was no indication whether each of the items had been fixed.

The highway runs through farm fields and almond orchards in the San Joaquin Valley northwest of Fresno. Its northbound lanes were closed during the investigation, backing up traffic for miles.