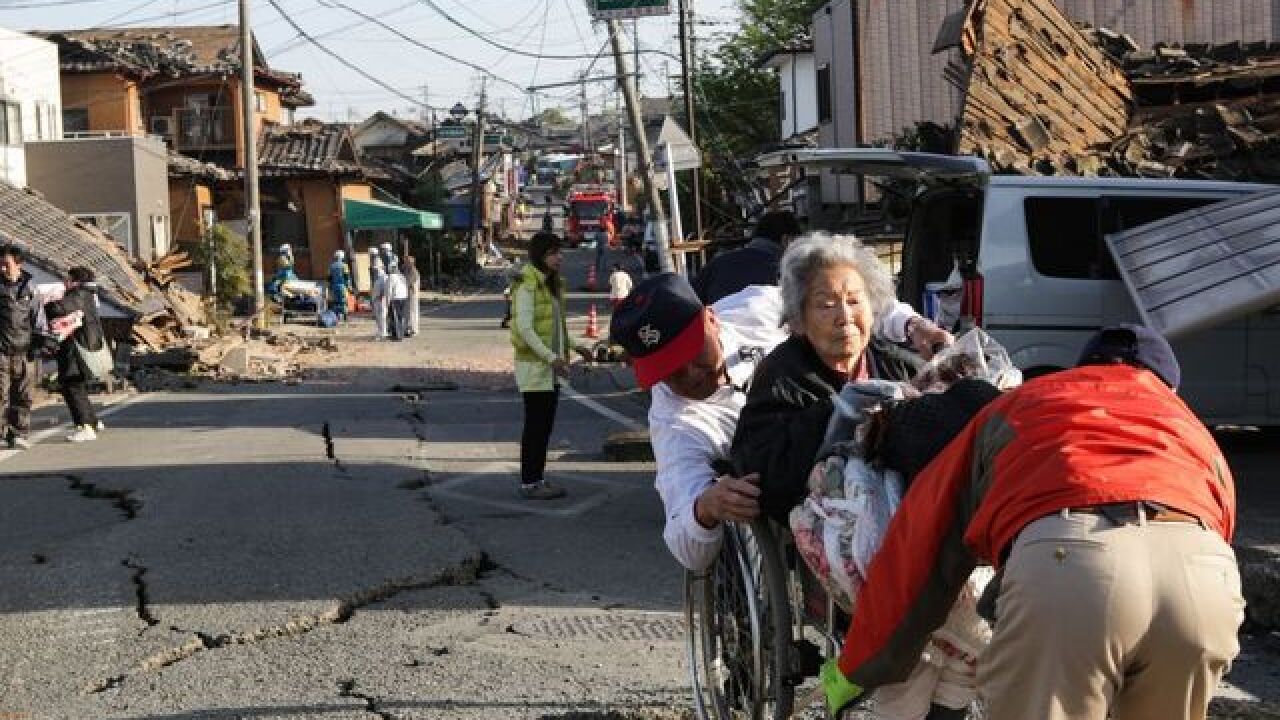 Authorities in Ecuador said today at least 1,700 people are still missing following a deadly earthquake that struck the country on Saturday. Many of those who are trapped have not had access to food or water.

The death toll has risen to 480 people.

Despite the grief roiling this earthquake-stricken town, Pablo Cordova has something to be thankful for: He can return the coffin his wife had bought for his funeral.

The 51-year-old hotel administrator was one of a trickle of survivors pulled from the rubble after Ecuador's strongest earthquake in decades flattened towns along the coast and killed more than 400 people.

Cordova's wife had given up on ever seeing him again after the five-story Gato de Portoviejo hotel collapsed on him Saturday, pancaked by the magnitude-7.8 earthquake like the rest of downtown. She asked his boss to help her buy his casket.

But Cordova held out for 36 hours beneath the rubble, drinking his own urine and praying service would be restored before his cellphone battery died. He was finally able to call his wife on Monday afternoon, and was pulled from the wreckage soon after by a team of rescuers from Colombia.

"They were organizing the funeral, but I've been reborn," Cordova said, grinning from beneath his bushy mustache in a provincial hospital. "I will have to give that coffin back because I still have a long way to go before I die."

On Tuesday, teams from all over the world fanned out across the country's Pacific coastline to look for the dozens of people still missing. Residents joined in with their bare hands, increasingly desperate as the clock for finding survivors runs down.

"Since Saturday, when this country started shaking, I've slept only two hours and haven't stopped working," said Juan Carranza, one of the firefighters leading the rescue effort in Portoviejo.

In the port city of Manta, a group of about 50 rescuers working with trained dogs, hydraulic jacks and a drill managed to free eight people trapped for more than 32 hours in the rubble of a shopping center that was flattened by Saturday night's quake.

While the country cheered videos of such rescues, tragedy continued to mount.

At the same shopping center, authorities were working to free a woman they had found buried alive with a heavy concrete slab pinning her legs when an aftershock forced them to suspend the effort. When they returned the debris pile had moved and the woman was dead, said Angel Moreira, a firefighter coordinating the effort.

Among the dead are an American and two Canadians.

A nun from Northern Ireland also died. Her Roman Catholic religious order, Servant Sisters of the Home of the Mother, said Sister Clare Theresa Crockett was leading a group of trainee nuns to safety at a school where she worked when a stairwell collapsed. She and five of the young postulants died.

Complicating rescue efforts is the lack of electricity in many areas, meaning noisy power generators must be used, making it harder to hear anyone who might be trapped beneath rubble.

Christian Rivera, the head of emergency services for the capital, Quito, said that depending on the circumstances a person without serious injuries can survive up to a week in such conditions.

"After that, there's a quick decline ... and the rescuers' work becomes very difficult," he said.

Foreign Minister Guillaume Long tweeted that 654 search experts from other nations were on the ground late Monday and that more were expected to arrive Tuesday — bringing to 13 the nationalities involved in the rescue.

The U.S. said Tuesday it would be sending experts and $100,000 in assistance.

President Rafael Correa has spent the past days touring flattened towns and accompanying missions to delivery supplies. He said Tuesday the quake had caused $3 billion in damage, and rebuilding would be a years-long process

After a deadly earthquake in Chile in 2010, that South American country was able to get back on its feet quickly thanks to a commodities boom that was energizing its economy. But Ecuador must rebuild amid a deep recession that has forced austerity on the OPEC nation's finances. To assist in the recovery effort, Ecuador plans to draw down on some $600 million in credit lines from the World Bank, Inter-American Development Bank and other multilateral lenders.

Manta, a thriving port city, is among the areas hit hardest by the earthquake. Power cables lie in city streets and electricity remains out in many neighborhoods. Among the many buildings flattened by the shaking was a control tower at the airport that was home to U.S. anti-narcotics missions in South America until Correa kicked the Americans out.

As humanitarian aid begun trickling in, long lines formed as people sought to buy bottled water. Many residents are sleeping outdoors in makeshift camps or in the street cuddled next to neighbors.