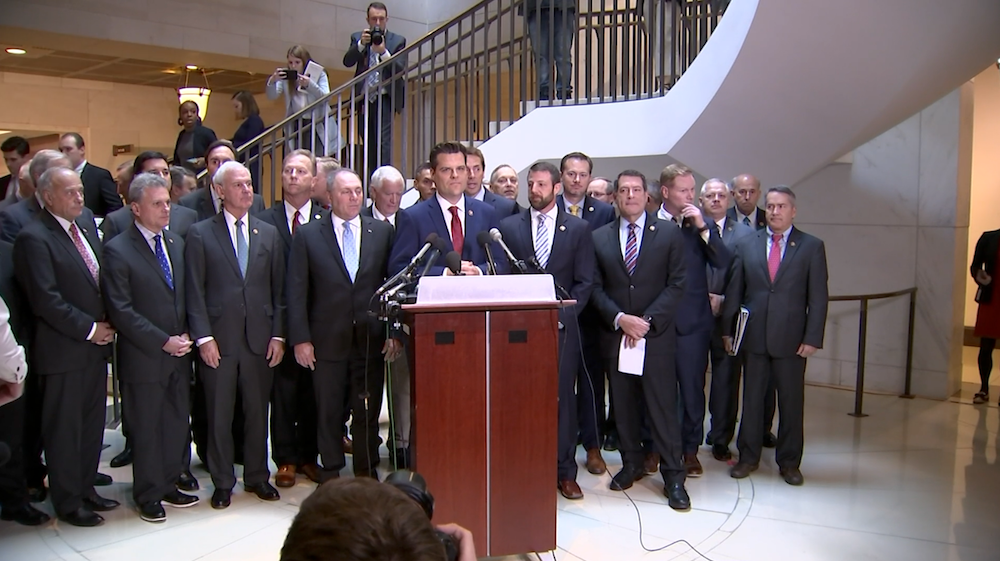 About two dozen Republican lawmakers interrupted an impeachment inquiry deposition that was being held in a secure room on Wednesday and called for more transparency in the investigation. 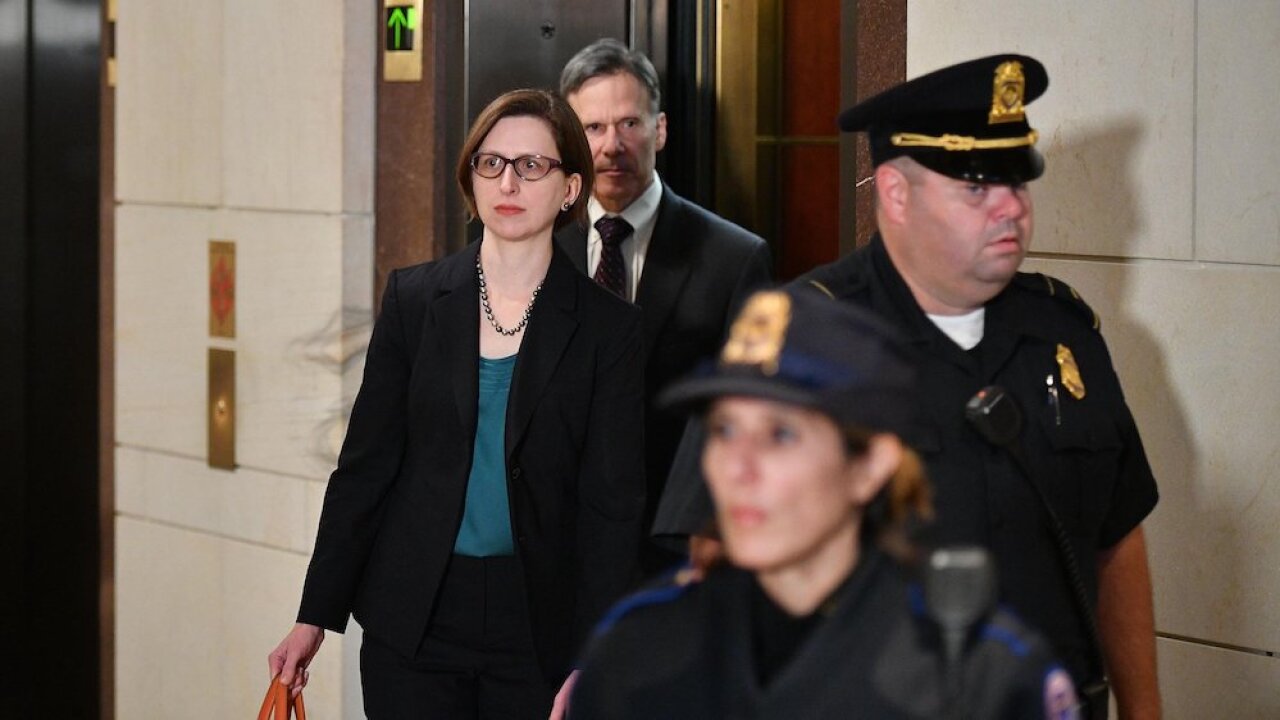 Roughly two-dozen House Republicans on Wednesday stormed a closed-door deposition in secure House Intelligence Committee spaces to rail against the Democratic-led impeachment inquiry , a political stunt ratcheting up the GOP complaints about the process that threw the deposition into doubt.

The conservative lawmakers, led by Republican Rep. Matt Gaetz of Florida, barged into the deposition and demanded they be allowed to see the closed-door proceedings where members of three committees planned to interview Deputy Assistant Defense Secretary Laura Cooper as part of the impeachment probe into President Donald Trump.

The chaotic scene, with Republicans flouting House rules to make a political point, represented a new and more confrontational phase of the Republican attack on House Intelligence Chairman Adam Schiff and the Democratic impeachment investigation.

LIVE UPDATES: The latest on the Trump impeachment inquiry

By early afternoon, pizza and snacks were being brought into the committee area. While the lawmakers in the secure room left around 2 p.m. ET to attend House votes, Minority Whip Steve Scalise, a Louisiana Republican who was one of the lawmakers taking part in the protest, said they might return later in the day.

It wasn't clear whether the deositon would still happen on Wednesday.

A source in the room said that as the witness, Cooper , was sitting down to testify, the Republicans stormed through the room's three different doors. Rep. Bradley Byrne of Alabama was yelling at Schiff, but the California Democrat did not engage, the source said. Other Democrats, including Rep. Val Demings of Florida, shouted back at both Byrne and Republican Rep. Louie Gohmert of Texas, who were yelling about the process.

Demings, according to one source in the room, asked Republicans if they were trying to teach their children "that it's OK to lie, steal and cheat so long as you don't get caught?"

"Don't you have any work to do today?" she said to one Republican member, according to the source.

Cooper left the room while the Republicans refused to vacate the space. The source says the Capitol Police and sergeant at arms have been consulted as members refuse to leave the room, and lawmakers say there are ongoing negotiations about how to end the standoff.

"It was closest thing I've seen around here to mass civil unrest as a member of Congress," said one source in the room.

The Republicans even walked into the hearing room with their electronics, according to Democratic Rep. Gerry Connolly of Virginia, which is prohibited in the space, known as a SCIF -- a sensitive compartmented information facility -- because it's a secure room used for discussing and handling classified information. GOP Rep. Mike Conaway of Texas, who is on the House Intelligence Committee, collected the electronics.

"All of us put our electronics in boxes outside," Connolly said. "That SCIF is used by Congress for lots of highly classified purposes. To compromise that to make a point, is deeply troubling."

The storm-the-room stunt came two days after Trump said that he thought Republicans "have to get tougher and fight." Many of the Republicans engaged in the protest were at a White House on Tuesday meeting with Trump, according to lawmakers in attendance, though GOP Rep. Mark Meadows of North Carolina said Wednesday's protest was not raised at the meeting.

Republicans say they forced their way in because Democrats are holding impeachment depositions behind closed doors, denying the public the ability to see what's being said by witnesses that could be used to impeach Trump.

"Show your face where we can all see the travesty that you are trying to foist on America and the degradation of our Republic that you're engaged in," said Rep. Mo Brooks of Alabama.

Rep. Jim Jordan, the top Republican on the Oversight Committee who has been in all of the depositions so far, said the Republican disruption was justified because "it's finally reached a boiling point where members just said they are so frustrated at the idea that they can't be a part of this and see what's going on."

But the GOP complaints about the process — Republicans who have been in the room have made the same argument about public hearings and releasing transcripts following nearly every deposition — comes as Republicans have focused their objections on the process rather than the substance of what the witnesses have said.

The GOP disruption comes one day after the committees heard from the top US diplomat in Ukraine, Bill Taylor, who told lawmakers in a lengthy opening statement that Trump had demanded Ukraine launch an investigation to help him politically before US security aid to Ukraine would be released, undercutting White House claims there was no quid pro quo with Ukraine.

Some Republicans in Congress have expressed concerns with Trump's conduct following Taylor's testimony — though others like Jordan have argued Taylor did not establish a quid pro quo — as Republicans continue to press Democrats to change how they conduct the impeachment inquiry.

"The picture coming out of it, based on the reporting that we've seen, I would say is not a good one," said Sen. John Thune of South Dakota, who as the majority whip is a member of Senate GOP leadership. "But I would say also that until we have a process that allows for everybody to see this in full transparency, it's pretty hard to draw an hard and fast conclusions."

But many Republicans in Congress remain fiercely loyal to Trump.

Brooks responded to questions about his reaction to Taylor's testimony by arguing that just hearing "bits and pieces" of testimony means "you're apt to be fooled."

"We don't know whether what he said is true or not because of the sham processes being used," Brooks said. "We have a judicial system, we have a bill of rights that are designed to guarantee a process so that fact-finders have the best chance of reaching the true conclusion."

Democrats say that Republican complaints about the process are simply unwarranted. Republicans on the three committees — Intelligence, Foreign Affairs and Oversight — have equal time to question witnesses.

Schiff has said that the committee will release transcripts and hold public hearings, but said they are conducting the fact-finding part of the investigation, like a grand jury before a trial, that's done behind closed doors.

He's argued that keeping witness testimony private in the early stages prevents other witnesses from learning what others are saying and aligning their stories.

"This (investigation) clearly has far too much fact for their comfort level, so they have to stop it from moving forward," said Rep. Debbie Wasserman Schultz, a Florida Democrat who was in the room when the Republicans barged in.

Rep. Eric Swalwell, a California Democrat on the Intelligence Committee, said that the Republican tactics would not deter the impeachment investigation.

"The tactics are an effort to delay the inevitable. They are a response to just damaging and pulverizing testimony yesterday," Swalwell said.

But this time he brought allies and made clear he wouldn't go quietly.