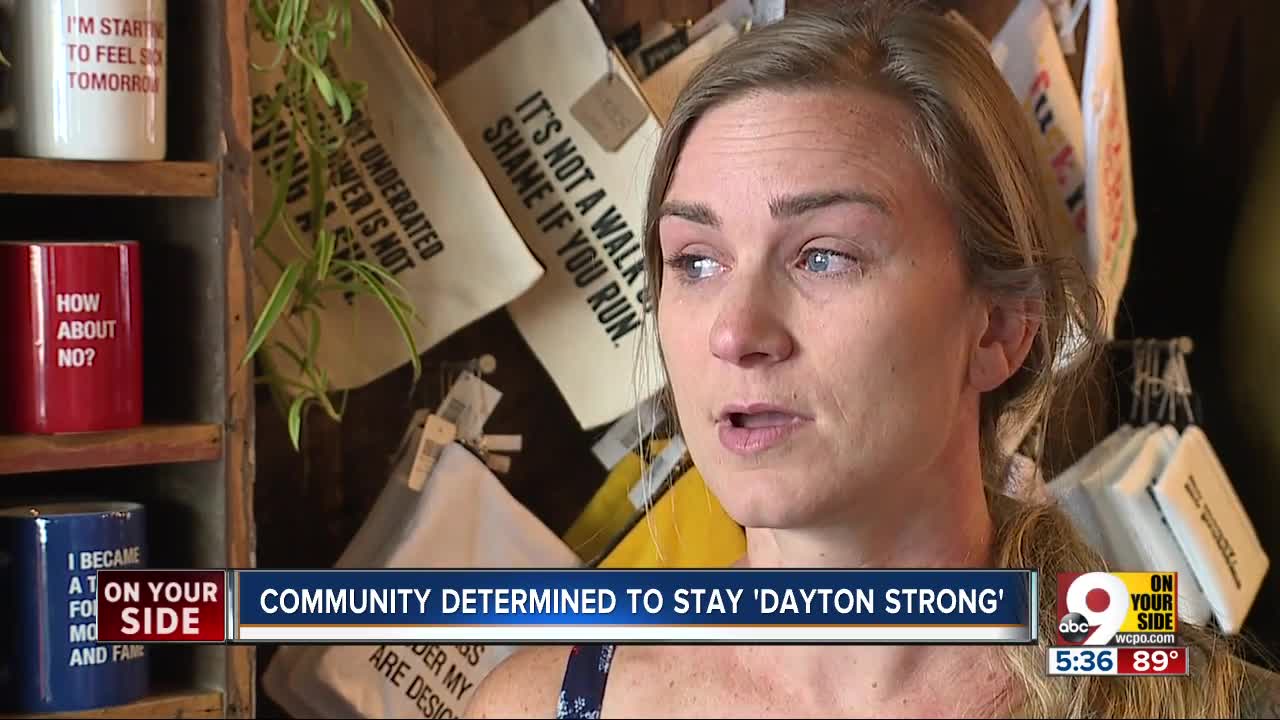 Friends, families and neighbors are pulling together to support each other and the community in the wake of a deadly mass shooting in Dayton.

DAYTON, Ohio — Friends, families and neighbors are pulling together to support each other and the community in the wake of a deadly mass shooting in Dayton.

People are back at work in the city’s Historic Oregon District, the arts and entertainment hub where a gunman went on a rampage that killed nine people and injured over two dozen more.

Each sale benefits the Dayton Foundation.

Lifting their voices through song and prayer, hundreds of people gathered Sunday night at a vigil remembering the nine victims, held just feet away from the attack.

Amid hate, Pastor Renard Allen, Jr. of St. Luke Baptist Church said that his community must believe in hope and peace.

And on Monday, Mayor Nan Whaley praised the people of Dayton for their “resilience” in the face of tragedy.

“I have no doubt that this community and its resilience and its willingness to see through — we’ve seen many things in this community — and I know we’re coming together strong again here,” Whaley said at a press conference on Monday.

At Wright State University in the Dayton area, students are supporting one another as they seek to move past the tragedy. There were roughly 15 students at the bar when shooting erupted.

Megan Betts, suspected gunman's sister, was among the nine people killed in Sunday’s attack. She was a student at Wright State, where fellow students held an event in her memory Monday afternoon. 30-year-old Logan Turner, another victim in the attack, also attended classes at Wright State.

Dr. Robert Rando, Wright State’s assistant vice president of student affairs, knows the shooting will no doubt weigh heavy on the minds of other students. The university will offer students counseling services and a 24-hour crisis hotline to help.

“We have this basic belief that we operate that the world in general is a relatively safe place, and that there are safe places in our world,” he said. “That belief can get challenged, especially when multiple situations occur.”

Neighbors will gather at 6 p.m. Monday for a “Public Healing Circle” for Dayton. The event at 111 E. Monument Ave is described as a way to meditate and pray for healing for friends and families of victims.