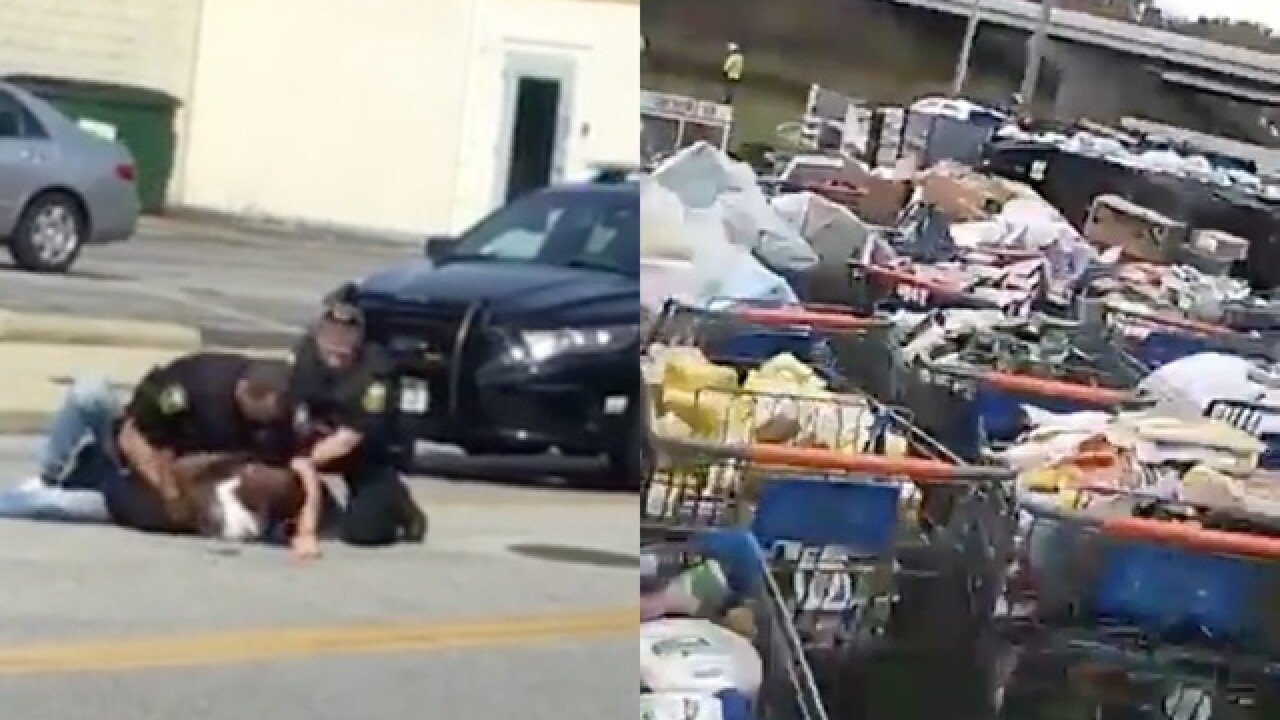 WCPO.com originally posted this story on Nov. 16, 2017, but since the videos are making the rounds of social media again, we're bringing it back.

A North College Hill police officer wrestles a man to the ground during a traffic stop, punches him in the head when he struggles and calls for another officer to arrest the screaming, sobbing woman recording the encounter on her cell phone.

Grocery carts heaped with ham, eggs, milk and butter -- a feast for hundreds -- sit clustered around a Walmart dumpster in the sun. A bearded man in sunglasses explains that the food is all good, but Walmart is throwing it out anyway.

"That's what's **** up with our country," he says. "They don't let employees have it. They won't sell it to anybody else. They're throwing it away."

So why haven't you seen them on our channel?

Easy: Neither is what it appears to be. Both videos are being circulated with information obscured, excluded or deliberately falsified.

Let's break it down.

What really happened in that arrest?

Although it's being circulated with a message claiming it happened in North College Hill within the last several days, the caption on the arrest video indicates it took place in Euclid, Ohio about three months ago.

If you lived in the Cleveland area, you might have heard of it when it happened: Officer Michael Amiott's violent treatment of 25-year-old Richard Hubbard III during that Aug. 12 arrest became such a heated subject that Euclid Mayor Kristen Holzheimer Gail suspended him without pay and began an investigation of his prior conduct on the job.

What she found -- reports of losing evidence and hitting a suspect with his gun, among others -- moved her to fire him Oct. 13. The city dropped all charges against Hubbard and his girlfriend, Yolimar Tirado, Nov. 15.

What about that Walmart?

The caption places it in "Salina," but it actually took place in Celina, Ohio, Nov. 6. All that food was thrown away, but it wasn't safe to eat as uploader Gary Joe Ahrns claimed.

Mercer County, of which Celina is the county seat, experienced an EF2 tornado the day before Ahrns posted his video. The storm knocked out power for 1,000 Midwest Electric customers in the area, including the Celina Walmart.

Unrefrigerated milk can spoil in as little as two hours. Butter is better at resisting contamination when left out, but any dairy product can be a comfortable homestead for bacteria when stored incorrectly. Ham, like milk, has about a two-hour lifespan out of the fridge.

After more than half a day without power, none of the discarded food was edible according to store standards. Walmart wrote on Facebook :

"Unfortunately, due to a tornado that affected our store in Celina, Ohio on November 5, the food being disposed of was unsafe for consumption after the store lost power for 14 hours. Per internal and health department policies, we followed proper procedures by disposing of the food."

We know, we know -- maybe you've left something out longer than recommended and been OK, but that was a decision you made for yourself. If the store were to knowingly sell spoiled food -- or food at a high risk of spoilage -- to customers who later became sick, it would be on the hook for a whole buffet of lawsuits.