This business is giving back in a creative way 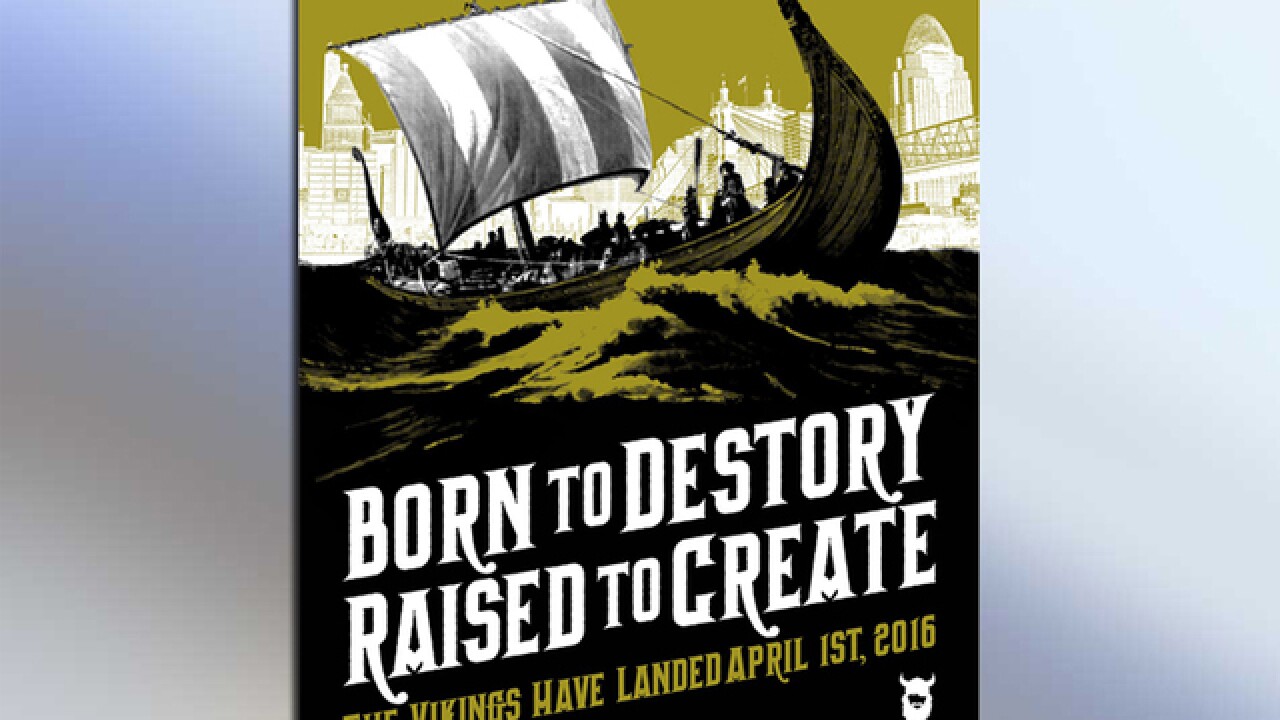 CINCINNATI -- Cincinnati creators Jason Snell and Brandon Hickle have been friends since their days at the University of Cincinnati College of Design, Architecture, Art and Planning.

On April 1, they’ll be official business partners when Snell's company We Have Become Vikings celebrates a merger with Hickle’s Southpaw Prints in the new 3CDC space at 1355 Walnut Street in Over-the-Rhine.

Both companies will fall under the We Have Become Vikings name.

This collaborative creative firm aims to give back to the community in a big way. Here’s 9 things you should know about We Have Become Vikings before its grand opening celebration.

For the grand opening event, starting at 5 p.m. on April 1, Snell and Hickle are enlisting help from their Over-The-Rhine neighbors to make things fun.

“The party is all about collaboration and showing our capabilities,” Snell, who is part of WCPO.com’s streaming sports shows, said.

2. Southpaw Prints and We Have Become Vikings both focus on creative design

“He covers all the printing from all of it, doing all the silk screen and paper goods and all the apparel stuff,” Snell explained.  “What I do is more the design, aspect.”

Snell has designed for companies big like Kroger and Amazon. He’s also collaborated with local groups, like the Northside Music Festival. Hickle started out screen printing for local bands and musicians.

3. They’re joining forces to give back to the community, in a big way.

The Cincinnati Golden Gloves Center, a youth boxing center, will get $3 from every T-shirt sale during the We Have Become Vikings opening event.

“We love the arts, we love music,” Hickle said. “We want to give back to youth organizations, it all starts with the youth.”

4. We Have Become Vikings is moving from Vine Street to Walnut Street for a reason.

In the new space you’ll be able to see Snell and Hickle making their products from start to finish. Snell’s original shop was located on Vine Street , and although Hickle started on Main Street in OTR, up until recently he was operating out of a production facility east of downtown Cincinnati.

“I needed a partner to grow and couldn’t do it with just hiring people,” Snell explained. “We had wanted to show the whole culture of ‘we’re making stuff , you can see it, you can walk into and buy from our shop.

5. Hickle is happy to bring his business back to OTR, too.

“When it came down to it, the atmosphere was missing,” Hickle said. “We were producing for somebody else.”

So when Snell approached him about going into business together, it was a no-brainer.

“You’ll be able to see us producing other people’s stuff and our stuff you see on the shelves,” he said. “ You can also look in and see that we’re designing.”

“I felt I was a good tenant of theirs on Vine Street, but I didn’t have my doors open,” Snell, whose wife works for 3CDC, explained. “They really worked with me to find the right space.”

Snell started his business in his dining room and said he appreciates the help 3CDC gave him and how it allows him to connect to the OTR community.

“They helped me come down and found a space for me,” he said. “Another big reason for me staying in town in finding a space I could connect and build culture. They really helped champion that.”

7. We Have Become Vikings has a background in designing for local and national companies

“I’ve done huge projects and I’ve done small projects, I did an annual report for Virgin America and (worked on) the Amazon Fire phone,” Snell said. “…and I do stuff for my neighbors, like doing the logo for Sidewinder Coffee.”

8. Southpaw Prints has been around for nearly a decade, designing and creating custom prints.

“I had bands and stuff I played in and I traveled with and when I’d go to shows I’d see a silk screen poster for the show and I just really thought that was a need (in Cincinnati,)” he said.  “I saw the art and saw the functionality of it, and I basically taught myself how to do it.”

The screen printing business was all based around rock posters for bands at first, he said, and named Southpaw Prints because Hickle is left-handed.

9. The business partners have many things to look forward to.

“There’s a lot of stuff kind of churning at this point right now. I think what we hope to achieve is we can build a really nice brand ourselves where people recognize our talent,” Hickle said. “And if it’s an apparel brand, we have a piece of clothing, people will recognize that, it will be beyond that. “

We Have Become Vikings opening event