Should more schools use drug testing? One Warren County school touts its success 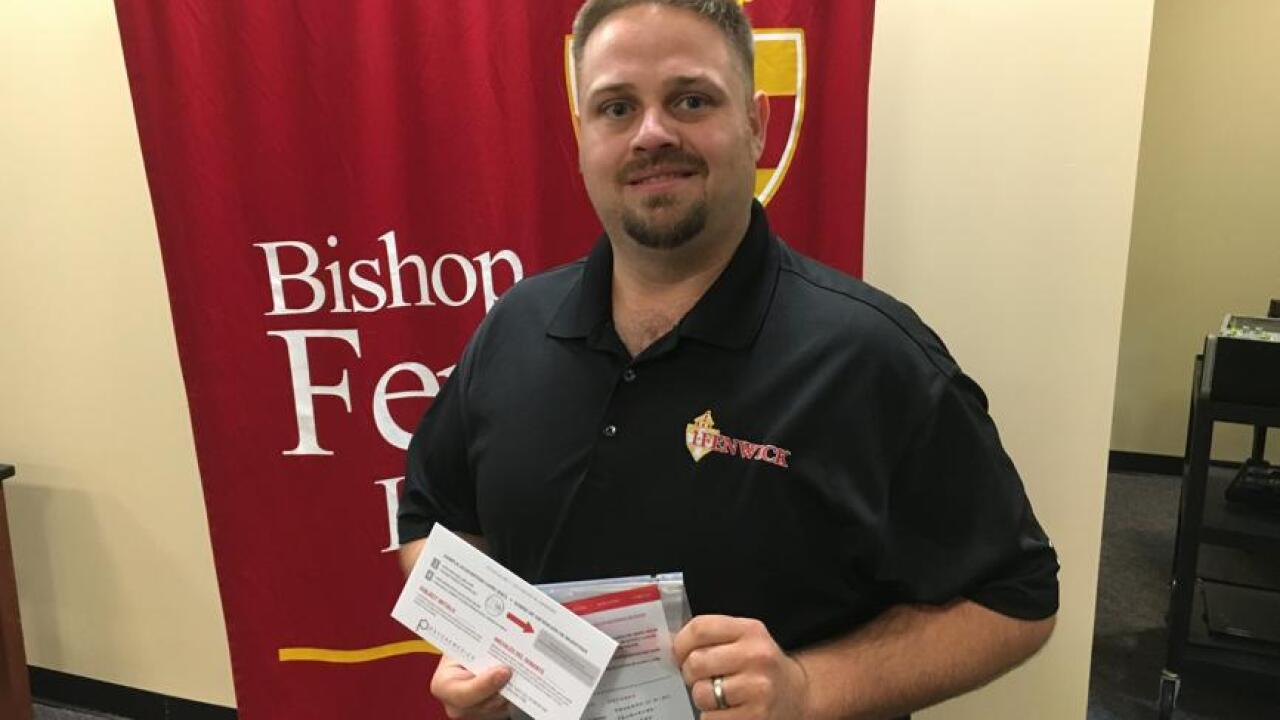 Rick McCrabb
Jason Umberg Sr., assistant principal at Fenwick High School, believes the school’s drug testing policy deters students from first using drugs. In the first year of the program, 1.5 percent of the students at Fenwick tested positive for drugs in their system.

For the 2018-19 school year, Fenwick High School initiated its Substance Use Prevention and Intervention Program. All 530 students were tested, and eight of them, or 1.5 percent, were found positive for drugs.

Other private schools in Ohio have reported a 4.25 percent drug use, and the national average was 36 percent last year.

Fenwick, a private school in Warren County, and Edgewood High School, a public school in Butler County, are the only local schools to test their students for drugs. At least four other Catholic schools in the area — Cincinnati LaSalle, Dayton Carroll, Dayton Chaminade-Julienne and Kettering Alter — have drug testing in place.

Fenwick assistant principal Jason Umberg Sr. said he “wasn’t surprised” by the low percentage of students with drugs in their system that were detected through hair samples.

Fenwick’s percentage wasn’t indicative of results in Butler County. In a survey sponsored by the Butler County Prevention Coalition, more than 26 percent of students in grades seven through 12 said they drank alcohol. The next-highest percentages addmited to using illicit drugs (20) electronic vapor (16.6), marijuana (13.9), any tobacco (9.1) and prescription drugs (9).

Charla Henderson, coordinator of the Butler County Prevention Coalition, said the survey will be repeated this fall, and she expects different results due to “numerous changes in policy and public perception.” She is anticipating increases in marijuana and electronic vaping usage and decreases in alcohol and prescription drugs.

“I am hopeful the results of these surveys inform our community stakeholders to take a stronger look at the messages we send youth through policy implementation,” she said.

Kristy Duritsch, director of the Safety Council of Southwestern Ohio, said while some parents may see drug testing as “an invasion of privacy,” they should view it as preventative.

“It is important to catch alcohol and drug use, even if experimental, at an early stage to intervene,” she said. “With such an increase in anxiety and depression in our young people, many are self-medicating as a way to cope. The key to prevention is teaching them healthy and more effective ways to communicate and cope with life’s struggles.”

Maj. David Birk from the Middletown Division of Police has worked closely with Fenwick school officials regarding monitoring drugs in the school, including randomly bringing in the department’s canines to perform sweeps in the lockers and parking lot.

He believes drug testing gives students “an out” when they receive peer pressure from their friends.

Umberg believes Fenwick’s drug testing policy may delay a student being introduced to drugs, thus reduce the likelihood of addiction.

“We are creating healthy habits,” he said. “That’s our goal.”

But the drug test comes with a steep price tag.

Umberg said the hair sample test costs the school $45 per student, or $23,850 for its student body. If Fenwick parents want their child also tested for alcohol, that test is an additional $95, and the parents are responsible for the cost, Umberg said. He said 13 percent of the families opted into this added program in the first year of screening.

“Save one kid and it’s worth every penny,” he said. “It’s not all about academics and scores. It’s about a healthy life.”

Last year, every Fenwick student was drug tested, and now every first-year student will be tested, whether they’re an incoming freshman or a transfer. The rest of the student body will be randomly tested throughout the year, Umberg said.

He said the school received little resistance from parents. Initially, they were concerned the drug testing indicated Fenwick had “a drug problem,” but they were told the school was being proactive, not reactive.

“We believe firmly that the Fenwick student body does not have a drug problem,” he said, “but the society surrounding and the media bombarding our students absolutely has a problem. And now dealing with legalization and decriminalization of marijuana, our youth are confused.”

Two parents also were concerned about hair samples being taken from their child, Umberg said.

Umberg said, depending on an individual’s metabolism, urine tests will only detect usage for up to a 72-hour period. The hair screening detects drug and alcohol for the previous 90-day time period.

“This is key, as it focuses on habits rather than mistakes,” he said.

At Edgewood, the district believes it’s important to provide students with as many resources as possible aimed at curtailing the use of illicit drugs, said Pratt.

She said the random student drug testing provides students with an “effective defense against drugs, ensures the health and safety of our students, and deters drug use.”

Students who are involved in extracurricular activities, athletics, and/or obtain parking privileges at Edgewood High School are subject to random drug testing, she said.

If a student tests positive, they will face a loss of privileges, including parking at the high school.

Data points from the 2017-2018 PRIDE Student Drug Use Survey Data, sponsored by the Butler County Prevention Coalition. The results are from Butler County students in grades seventh through 12th regarding any use in the past year of the following substances:

Fenwick High School has a three-strike policy regarding students who test positive for drug use.

Strike One: A first positive result reported to the school has zero disciplinary outcomes, but it does start a process of intervention including the family, school counselors, outside counseling, and recurring screenings.

Strike Two: A second positive test will result in continued emphasis on intervention. The school will also take actions to limit involvement in school-based activities to promote a focus of time and energy on the intervention.

Strike Three: A third positive will result in the school administration asking the family to withdraw the student.