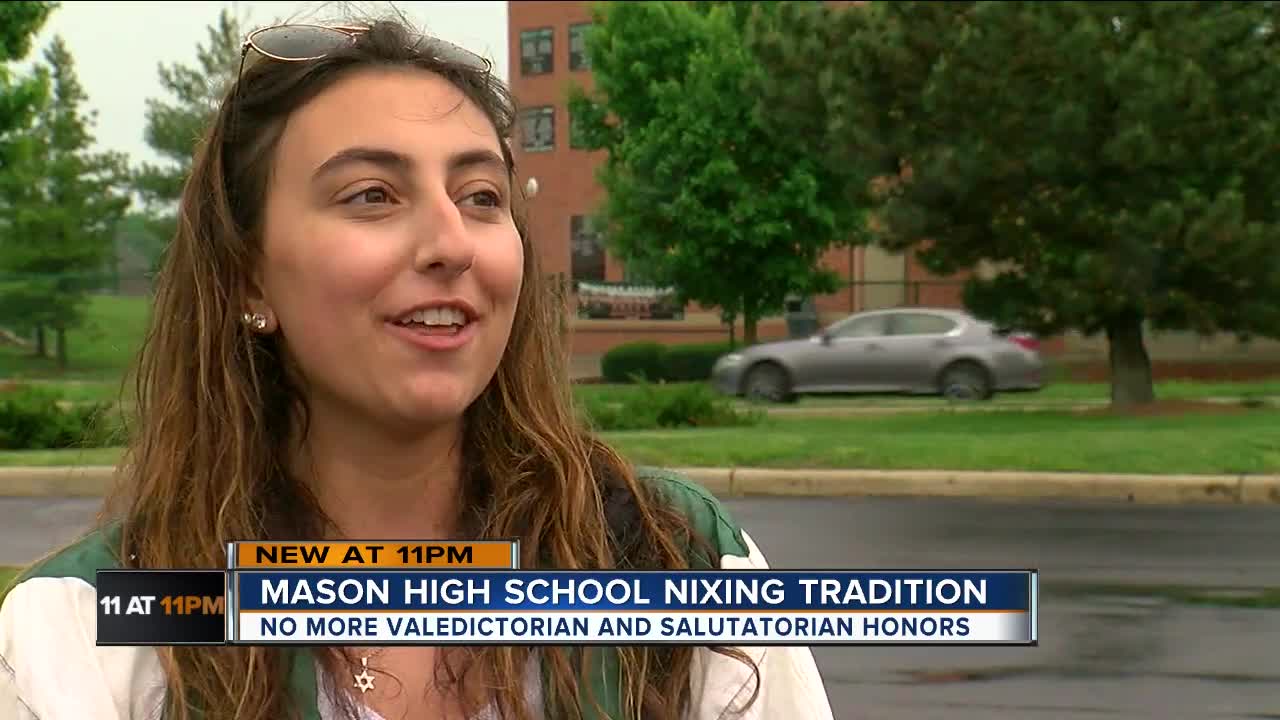 Mason High School students won't be competing for valedictorian and salutatorian titles starting next school year. Instead, they'll be switching to the Latin honors system employed by colleges — a move that will allow many high-performing students to claim the same title and (administrators hope) foster a greater sense of mental wellness by de-emphasizing direct competition with classmates.

MASON, Ohio — Mason High School students won't be competing for valedictorian and salutatorian titles starting next school year. Instead, they'll be switching to the Latin honors system employed by colleges — a move that will allow many high-performing students to claim the same title and (administrators hope) foster a greater sense of mental wellness by de-emphasizing direct competition with classmates.

School officials announced the change Thursday, saying a year-long study with focus groups with students, staff and families contributed to the decision.

"We are moving to a recognition system eliminating valedictorian and salutatorian honors, and shifting to recognizing students who have achieved outstanding academic success through a multitude of pathways," Principal Bobby Dodd said. "The recognition system will reward our students for genuine academic success based on their academic accomplishments. This will help reduce the overall competitive culture at MHS to allow students to focus on exploring learning opportunities that are of interest to them."

Dodd said the class ranking used to recognize a valedictorian and salutatorian is based on their weighted GPA, but the class rank is not reported to colleges.

"The paradoxical nature of class rank within the culture of MHS does nothing to decrease the competition among students," he said.

School officials also said that colleges they discussed the idea with "affirmed that they place more weight on how students perform in rigorous courses and less weight on class rank."

Kent State student Samantha Segerman, who graduated from Mason High in 2017, said she clearly remembered the fear of class-rank slippage she and her peers experienced there: An anxiety so intense it led to "a lot of late nights, a lot of stress, a few mental breakdowns." At a certain point, she said, the pressure stopped emanating from parents and teachers and started to come from within.

Seeing competitor-classmates perform well only made it more stressful.

“I know there were kids well over a 4.0 who were barely in the top 10 percent,” Segerman said. The school lost two students to suicide during her time there, she added.

Her mother, Sue Segerman, said she sympathized with current Mason students who might have been working toward valedictorian or salutatorian as a goal.

Eliminating the val- and sal- recognition is just part of a recent effort by Mason City Schools to improve students' mental wellness. Starting in the fall, Mason High School will also change the way it calculates grade point averages. It will transitioning from a 4.0 score with "add-on" weights to a 5.0 weighted scale, officials said Thursday.

School officials said the GPA calculation change is designed to encourage students to take classes that interest them rather than just loading up on Advanced Placement and College Credit Plus courses.

"During our conversations, we gathered feedback about the current culture at MHS and the impact it is having on students' mental well-being. A large part of these discussions included the highly competitive culture and the impact student course loads have on stress and anxiety levels," Dodd said. "We have researched the reasons why students take a large number of AP courses. While there are some students who take a large number of courses because of their general interest in the subject area, there is a disturbingly large number of students who take AP courses to increase their grade point average."

Officials also said they are considering reductions in homework and summer work.