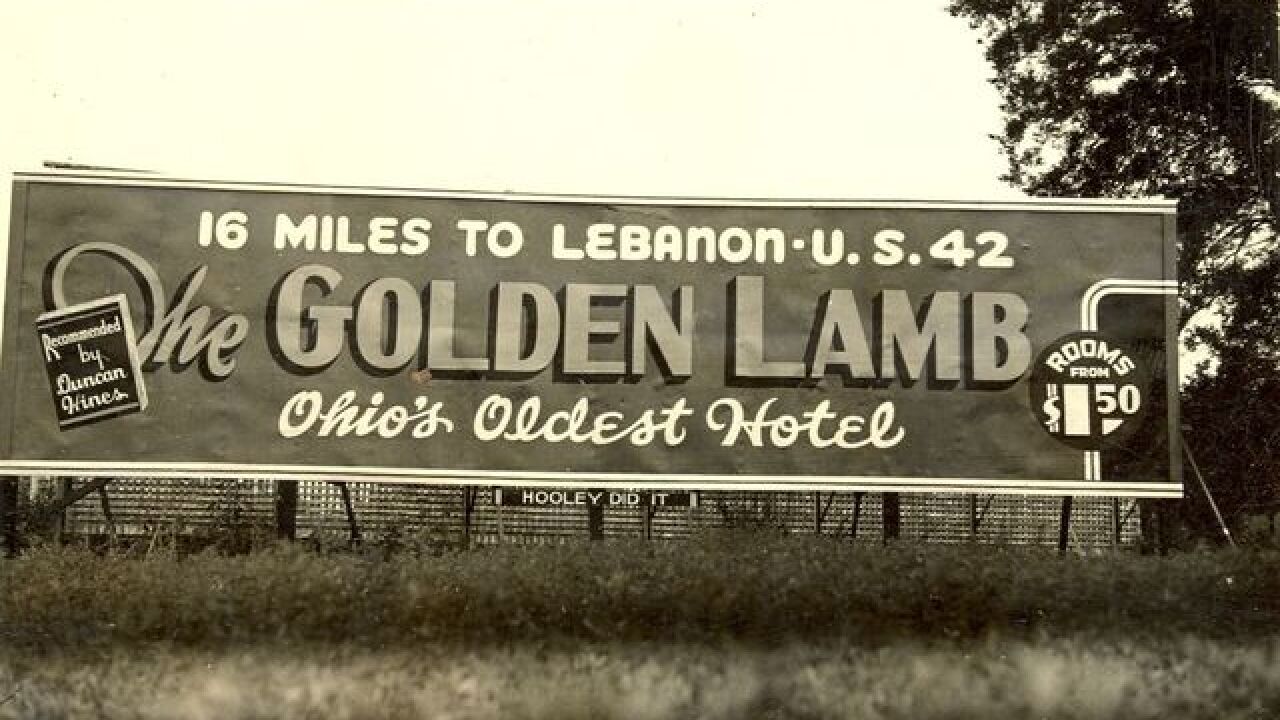 <div> An early billboard advertising the Golden Lamb restaurant and inn, with its rooms starting at only $1.50. Provided</div> <div>  </div>

LEBANON, Ohio — Sure, Cleveland and Columbus and (ahem) even Toledo have their charms. They even have a bit of history going for them, too.

And who could argue with the web site’s selection? After all, the Golden Lamb in Lebanon is not only Ohio’s oldest inn, it’s the Buckeye state’s oldest continuously operating business, dating to 1803. And it recently completed the most significant investment in the last half-century with the reopening of the newly renovated Black Horse Tavern.

Here’s what MSN said about the Golden Lamb:

“Built in 1803, this old colonial building has welcomed an impressive 12 US presidents over the years (the most recent being George W Bush). Today, The Golden Lamb – purportedly Ohio's longest continually operated business – remains a popular resting point for travelers, serving comfort food such as burgers, fried chicken, shrimp and ribs, alongside an impressive range of regional beers.”

The folks who operate the Golden Lamb welcomed the inclusion of their restaurant on MSN’s list.

“The rich history of the Golden Lamb dates back to Ohio’s founding and the United States' first decades as a country,” Bill Kilimnik, general manager and operating partner of the Golden Lamb, told this news outlet. “Our legacy runs deep, and we embrace it in everything that we do. We are dedicated to delighting guests with a unique experience found nowhere else, and we are honored to be recognized as ‘Ohio’s most famous restaurant.’”

The MSN web site was mum on its precise selection criteria, but the list of 50 restaurants was introduced with this opening paragraph:

“America has some incredible restaurants. From coast to coast, you'll find fine-dining spots, tasty burger and barbecue joints, and cafés, shacks and delis that are genius in their simplicity. Here we take a look at the most famous restaurant in every U.S. state you should dine in at least once.”

We think you should dine at the Golden Lamb more than just once, but hey, that’s just us.