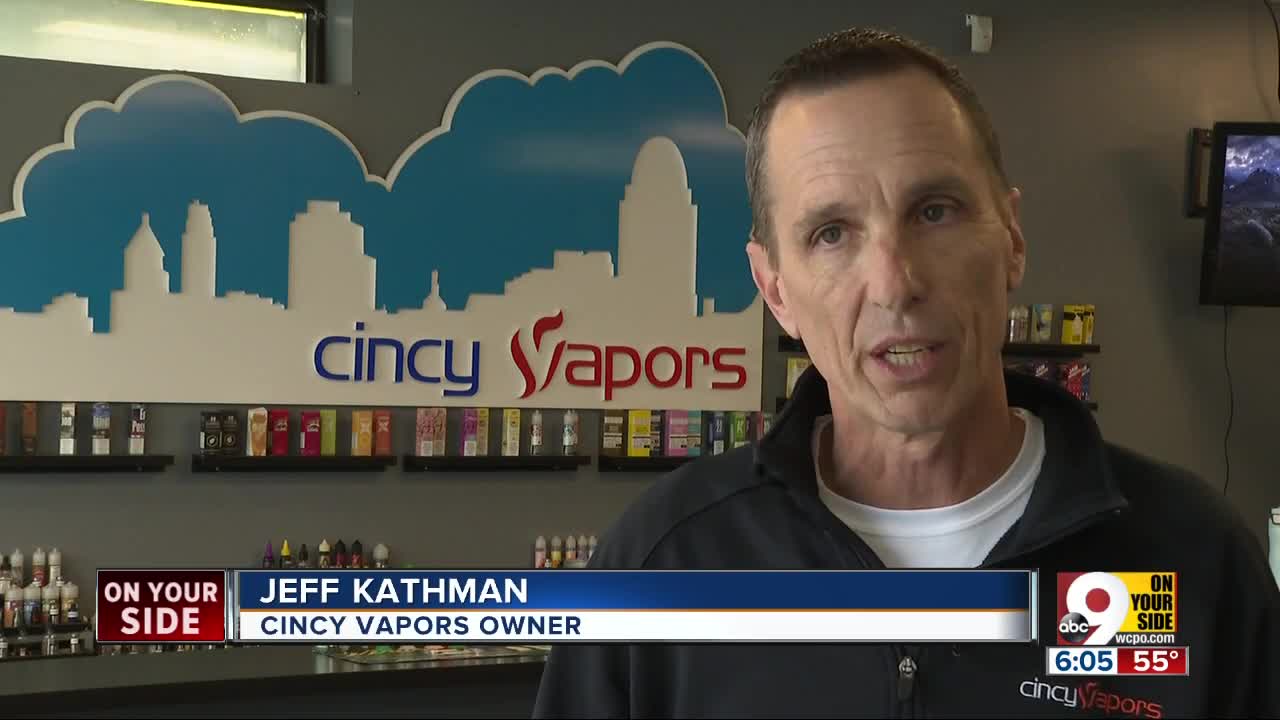 CINCINNATI — Jeff Kathman has been walking a high wire as the owner of a vape shop.

Kathman and others say their business has suffered from federal government declarations that vaping kills and vows last fall by President Donald Trump and Ohio Gov. Mike DeWine to ban flavored e-cigarettes because youths prefer them.

“There's a lot of vapor stores who have suffered and had to close because of this," said Kathman, who owns Cincy Vapors.

"Since that scare started, maybe in August, our business is down drastically and it has just not bounced back."

But Kathman is beginning to think he won’t have to close now that the CDC says most vaping-related deaths and lung injuries appear to be connected to black-market marijuana vaping devices, not the products Kathman sells in his store.

In addition, Trump has backed down some from his hard-line stand of last year.

Under the new FDA plan announced in December, the federal government will still ban fruit- and mint-flavored products used in e-cigarettes but allow vape shops to sell flavors from tank-based systems, which let people mix their own nicotine and vaping juice.

Kathman said the open-tank vapes are by far the core of his business.

"I'm going to say we're 90% open-tank systems, which is the refillable liquids that you see on the shelves," Kathman said.

And Kathman probably doesn’t have to worry about a statewide ban because Ohio lawmakers are not rushing to support either of the two bills that have been introduced.

Customers like Susan Forrester of Bridgetown are relieved they will still be able to buy the products they say have been their key to quitting smoking.

"It's been a blessing ever since because I have not touched a cigarette in the last five years," Forrester said.

"I don't cough anymore. I can get on that treadmill and go. I can ride my bike and go. There's no problems. My doctors are happy. They are definitely, definitely happy that I'm off cigarettes."

Going forward, the FDA ruling means cartridge or pod systems like JUUL and others will only be able to sell tobacco or menthol flavors.

Health and Human Services Secretary Alex Azar said the ruling aims to "strike the right public health balance" by targeting products widely used by children while allowing vaping as a "potential off-ramp" for adults who want to quit smoking, according to USA TODAY.

But Kathman said he wishes there was more government regulation where kids are concerned.

Kathman said the federal limits ignore online sales, which make it easy for underage people to buy vaping products, and leave loopholes for other devices like disposable vapes that he won't even carry in his store.

"We do have to protect our kids, but they're not doing it sensibly,” Kathman said. “They're leaving these huge gaps that are going to cause problems in the end that could come back to hurt us."

SEE the CDC's report on vaping.