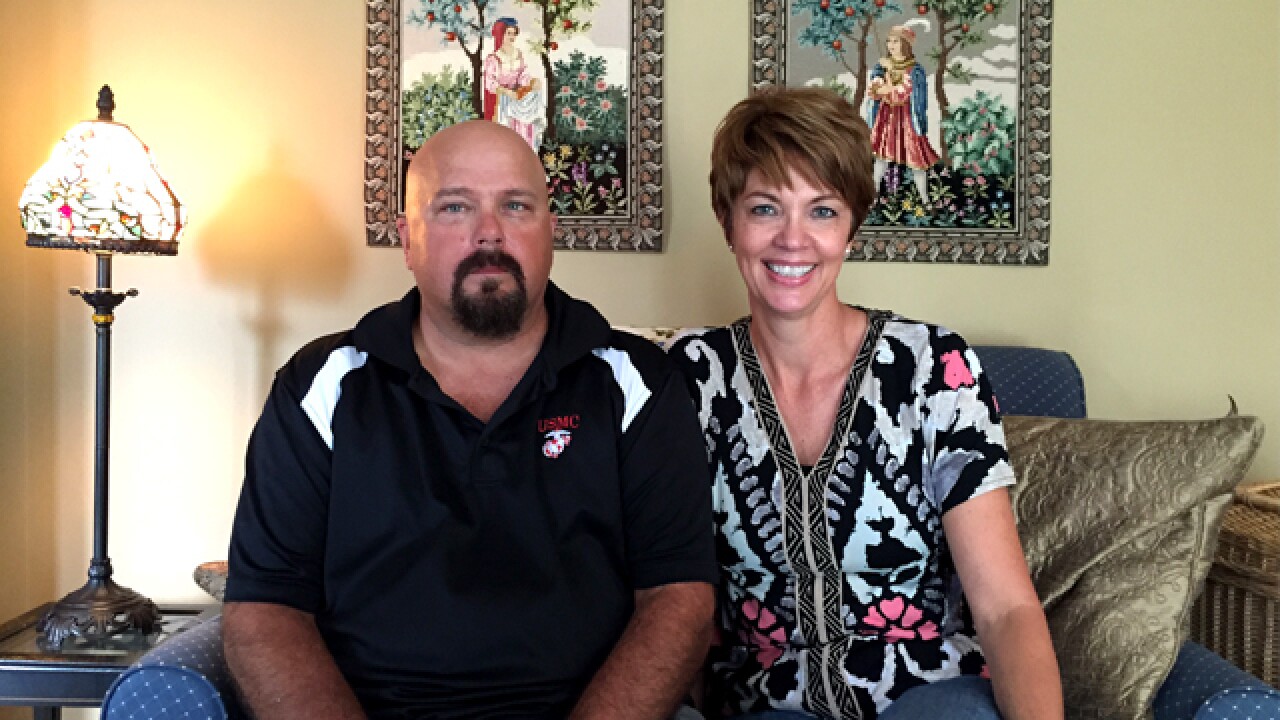 &lt;p&gt;John and Lisa Trump in their North Bend, Ohio home.&lt;/p&gt;

WCPO originally published this story in 2014 and has brought it back as part of our special coverage of local legends leading up to Halloween. For more real-life stories of the "paranormal," go to wcpo.com/haunted.

CINCINNATI – It’s a Saturday night, and John and Lisa Trump are sitting in the dark staying very silent.

But this isn’t a date night for the couple. They’re not in a movie theater, having a romantic dinner nor snuggled on the couch in the family room watching a scary movie.

They are together in a stranger’s basement watching the dial jump on an electromagnetic energy meter.

The Trumps aren’t your typical husband and wife. They’re ghost hunters. Their mission: Help local families cope with the things that go bump in the night.

“It’s a scary thing to try to go to sleep at night when you know there’s something in your home,” Lisa said. “It’s learning how to manage it and to feel comfortable with it and to take control of it. And to me, that’s where the passion is.”

Lisa, 54, discovered that passion at an early age. She said she always knew she could feel “spirit energy,” and detect the unknown.

But it wasn’t until the summer of 2011 that she convinced her husband – a Marine Corps veteran and “spirit” skeptic – that they should use her “skills” and join a local paranormal group.

“I didn’t really want to do it, but I knew she wanted to,” John, 55, said. “So I basically went to do two things: Keep an eye on her and try to disprove everything I could.”

That’s when they found the Paranormal Investigators of Northern Kentucky, better known as PINK.

PINK had six members when Northern Kentucky resident Mike Palmer founded it in 2005. Today the team numbers 18, including two public school teachers, an aircraft engineer and a computer programmer.

The group was holding a membership drive at a local library when they first met Lisa and John.

Becoming a part of the team wasn’t easy, Lisa said.

“When we applied, there were about 30 other people there,” she said. “We knew they were only going to pick five. I didn’t think we had a chance.”

A few days later, they got the call: They were in.

But Lisa, a University of Cincinnati Health Services employee, and John, a materials facilitator at General Electric, had no idea what they were getting into.

This was more than just a hobby; they were fighting evil, Lisa said.

‘We Thought This Guy Was Crazy’

Lisa and John were on the team only a few months when they were called to a home in Highland Heights, Ky. A man who claimed he had been hearing voices greeted them at the door.

“We thought this guy was crazy,” he said. “I thought it was schizophrenia, and he had just lost it.”

The homeowner claimed he had been burned and scratched. In addition, his face twitched when he spoke.

“I looked at him and said, ‘What’s the matter?’ and he replied, ‘It’s talking to me right now,’” Lisa said. “I thought we were dealing with someone who was really mentally ill. But when we turned the equipment on, everything started lighting up.”

John said the investigators used a meter that uses flashing lights to signal an increase in electromagnetic energy on the homeowner and it “lit up like a Christmas tree.”

The team also collected audio throughout the home to try and pick up EVPs, also known as Electronic Voice Phenomena. These are recorded sounds that often resemble voices, they said. John said these voices normally can’t be heard with the naked ear, and are usually discovered later when the audio’s gain is increased.

To skeptics, EVPs could just as easily be the creaks of an old home, a growl from someone’s stomach or whistling winds. But the members of PINK claim some recordings are indisputably paranormal.

The team reviewed their evidence from Highland Heights the following week. It was then Lisa said she detected something really was talking to the homeowner.

She said they heard this strange, southern voice while setting up their equipment (Use headphones for best audio experience):

They translated it: “Huh, you gotta’ do something better than that.”

“That wasn’t any of us,” John said. “And these are controlled areas where I know who’s in there. There were only three of us in this room. There was no one in that house that had an accent like that.

“And you’re hearing this from the skeptic.”

Two other voices – both gravelly and angry – revealed themselves that night, Lisa said.

When an investigator asked: “If you want to leave us a message, just talk into our recorder,” they said they heard this:

(EVP can be heard at 5 seconds. Warning: This audio contains profanity.)

How Lisa and John translate it: “F---ing hear me.”

“You hear something grumble at me,” Lisa said. “It happens after the ‘chunk chunk’ sound, like a shotgun. That wasn’t any of us either. We don’t know what that was.”

The recordings didn’t end there.

Lisa said a strange moan was recorded when a team member attempted to bless the home. Again, she claimed this sound came from no one in her group:

“I later learned that capturing moaning during blessings is a common thing with demonic entities,” Lisa said.

She said the team’s evidence was turned over to a priest who has since visited the home to analyze it for an exorcism.

The next big case brought Lisa, John and PINK founder Mike Palmer to a mansion in Kings Mountain, Ky., about an hour and 20 minutes south of Lexington.

The home was just 6 months old, but was built where a fire had gutted another home, John said. When the team arrived, he said the homeowner left the property and gave the trio complete access to its every room.

“He looked at us and said, ‘Here’s the keys. Lock up when you’re done,’” John said. “This guy didn’t believe in ghosts, but couldn’t explain the stuff he was seeing. We had no idea what we were walking into.”

Lisa said the homeowner was a successful business owner and the home was beautiful, “but it was so freaking haunted it’s not even funny.”

While John, Lisa and Palmer were setting up their equipment inside, they captured audio of what they claim is a singing woman. Lisa said she was the only woman in the home at the time, and it wasn’t her voice on the recorder.

“You hear me talking to (Palmer). You can hear the level of my voice,” Lisa said. “Then this thing comes in from the background.”

But that’s not the scariest voice Lisa and John claim they’ve encountered.

At a family’s home in Florence, Ky., they said the team heard something they still can’t explain: A growl so loud it jolted everyone in the room.

Lisa said she was facing a stairway when she saw a shadow dart around a corner. Palmer decided to descend the stairs to investigate, she said.

That’s when they said they heard this:

“The static noise around this audio, we have no idea what that is,” Lisa said. “We didn’t hear that in person, just on the recording.”

“This wasn’t like the EVPs where we hear the voice later,” John said. “We all heard this clear as anything. It sounded like it was right next to us. We were like, ‘What the hell was that?’”

The EVPs the Trumps have collected in their travels range from coarse growls to delicate voices. Lisa and John were in Guilford, Ind. when they claimed they captured a recording of a deceased child.

The homeowners there told the team they had been hearing the voice of a little boy in their house, John said.

When John and Lisa listened to their audio the next day, they claim they heard him too.

“You can hear him say, ‘Yeah.’ That’s how soft his little voice was,” Lisa said. “He just chimed into our conversations like he was just tagging along the whole night.”

That was nothing compared to what they heard at an 18th-century home in Petersburg, Ky., she said.

Lisa and John call it “the most haunted place” they’ve ever encountered.”

John said a wealthy older couple owned the home, but didn’t live there. The owners had found a dress in the building’s chimney that dated back to the 1700s, and there had been reports of strange lights in the house.

Inside, they captured audio of another child, Lisa said.

“There were no children in that house. There were no kids in the area,” John said. “And this was recorded at about 1 a.m.”

Lisa said the team also captured the voices of two spirit men who even said their names.

She said this EVP was recorded in the basement:

How Lisa and John translate it: “They call me Frank.”

Upstairs, Lisa said they recorded audio of a spirit who said his name was Walter.

“Walter and Frank were in that house with a child,” Lisa said. “There’s no question.”

From Spirit World to Real World

Lisa and John live in a quiet, comfortable home in North Bend, Ohio. But they aren’t there often.

When they started moonlighting as paranormal investigators, they were taking on a case every other week, Lisa said. That meant 40 hours a month of combing through evidence while they weren’t at their full-time jobs.

The Trumps said they recently started slowing down to have more time for themselves. But the questions at their day jobs have only ramped up.

“I have people at (UC Health Services) who are very interested in what I do,” Lisa said. “It’s not a secret. There are some who are fine with it and some who aren’t.”

Unlike Lisa, John said he keeps his ghost hunting talk to a minimum at GE. The only people who know are his closest friends and family.

But every so often John becomes the punch line of a joke.

“My brother likes to tell people that we meet: ‘Oh, John is a ghostbuster,’” he said. “But other than that, I don’t talk about it too much. Most of the guys would call me crazy if they knew.”

John describes himself as a skeptic, but said it’s impossible not to question your beliefs when you hear and see what he has seen and recorded.

“When you’re sitting in a dark room and there’s nobody there but you and two other people, and then you hear something you can’t explain, then there’s no question,’’ John said.

Lisa said she doesn’t care if people call her crazy – and she’s met plenty who have.

She concentrates instead on helping others, she said.

“Almost every single house we go to, someone says to us, ‘You’re going to think I’m crazy,’” Lisa said. “But we don’t. When we go into a home and hear what they’re hearing, it helps them feel validated. It gets them through their fear.”