Then & Now: The evolution of Cincinnati's riverfront 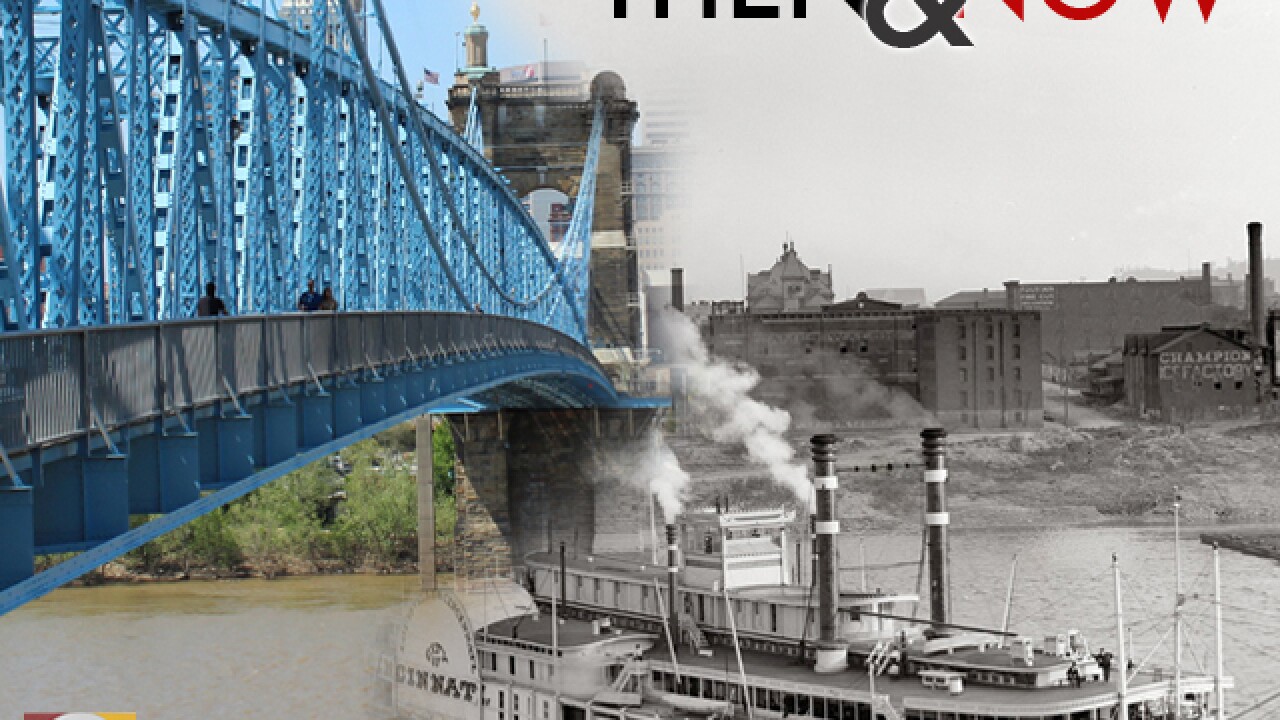 For a series of 'Then & Now' interactive looks at Cincinnati's riverfront, go to the bottom of the article.

In the 19th century, the hum of steamboats echoed through the air – not cheers from two sports stadiums.

But despite its changing landscape, Cincinnati’s riverfront has helped shape and define an entire region.

“If we didn’t live near the Ohio River, Cincinnati would look like some desolate place in the middle of nowhere,” said 62-year-old Alan Bernstein, owner of BB Riverboats in Newport, Kentucky. “That’s how much the Ohio River and the riverfront mean to our way of life.”

Cincinnati’s downtown riverfront once saw more than 30 steamboat visits a day. It later became the epicenter of freight rail for the western portion of the United States.

But that growth faded in the 20th century as Cincinnati’s central business district began to deteriorate. Pollution and industrial decline on the riverfront pushed businesses and people inland.

Then war brought it back to life.

“Post World War II was the industrial boom of our country,” Bernstein said. “Steel mills and chemical plants and a lot of industry grew along the river. It brought people back.”

In 1970, Riverfront Stadium opened and it housed a different kind of machine: a big red one.

Two years later, Congress enacted the Clean Water Act in an attempt to restore and maintain the nation’s rivers.

It took time, but Bernstein said those efforts began to pay off.

“We started to see condos and buildings sprout up along the river,” Bernstein said. “It became a desirable place for people to live – to be part of the natural beauty of the Ohio River.”

RELATED: Then & Now: A trip back in time at Kings Island

In September of 1975, Riverfront Coliseum – now known as U.S. Bank Arena – opened next to the stadium.

It became the home of the Cincinnati Stingers and soon hosted concerts, political rallies, tennis tournaments, figure skating and more. It is the largest indoor arena in the region at 346,100 square feet.

“It was a big deal,” Bernstein said. “It offered a lot of great stuff and it really added to the growing excitement of the riverfront.”

The Bengals and the Reds shared Riverfront Stadium, which was later renamed Cinergy Field. But as the stadium aged, the teams demanded more modern facilities.

Paul Brown Stadium broke ground less than half a mile away on April 25, 1998.

When the Bengals moved out on Aug. 19, 2000, Cinergy Field was partially demolished to allow construction for what would become Great American Ball Park three years later.

On December 29, 2002, Cinergy Field was demolished by implosion.

Between the stadiums now sat 18 acres of undeveloped riverfront land.

Spurred by millions of dollars in investments, Cincinnati partnered with Hamilton County in 2007 to begin work on a riverfront game-changer: The Banks.

In late 2009, construction began on luxury apartments and street-level restaurants. The Current at the Banks apartments opened in 2011 to a waiting list of hundreds of hopeful tenants.

This month, crews broke ground on the second phase of The Banks development, which is expected to bring nearly 300 more apartments and another burst in retail space.

Bengals officials and Hamilton County administrators have also paved the way for a 1,400-employee General Electric facility to move to The Banks within three years.

“I think when they get The Banks completed, there’s going to be quite a dynamic and a real destination for people to go and enjoy the Ohio River,” Bernstein said. “I’ve gone up and down the Ohio River more times than I can tell you, from Pittsburgh to the Mississippi River, and Cincinnati is the best.”

Local and federal governments have invested more than $2 billion in the riverfront’s redevelopment over the past decade.

And that number is still growing.

When Bernstein looks at the riverfront today, he said he is reminded of a time before The Banks – a time when a Cincinnati landmark was just mounds of dirt and warehouses.

“My father brought me along in 1970 and said ‘Alan, the river is going to be the place in Cincinnati to be,’” Bernstein said. “When he said that in 1970, it was not. In fact, it was just the opposite. But he really believed the riverfront was going to be the center of our community. Now you see what it is today, and he was right.”

To change time in each interactive image below, just click and hold the white circular “slider” tool at the center of the photo. Then move the slider left and right to see “before” and “after.”

The Sidewheeler Cincinnati is seen passing under the Roebling Suspension Bridge in 1906. The Roebling was completed in 1867 and still stands strong today.

Another angle of the riverfront and the Roebling Suspension Bridge taken from Newport in 1907.

This image of the riverfront was captured between 1910 and 1920. During this period, more than 30 steamboats would pass through, moving goods to and from cities hundreds of miles away.

A comparison of the 1912 and 2013 city maps. In just more than 100 years, the landscape of Cincinnati's riverfront and downtown area have changed tremendously.

An aerial image of Cincinnati taken in 1949 compared to today shows how the warehouses and industrial portion of the riverfront have transformed into The Banks and sports stadiums.

Cincinnati's riverfront in 1950 compared to today. The Scripps Center was completed in 1990. The Great American Tower at Queen City Square was finished in 2010.

Riverfront Stadium in the 1990s

Riverfront Stadium, later renamed Cinergy Field, opened June 30, 1970 and hosted the Bengals and the Reds. On December 29, 2002, it was demolished by implosion. Today, the Current at the Banks apartments and Great American Ball Park stand in its place.