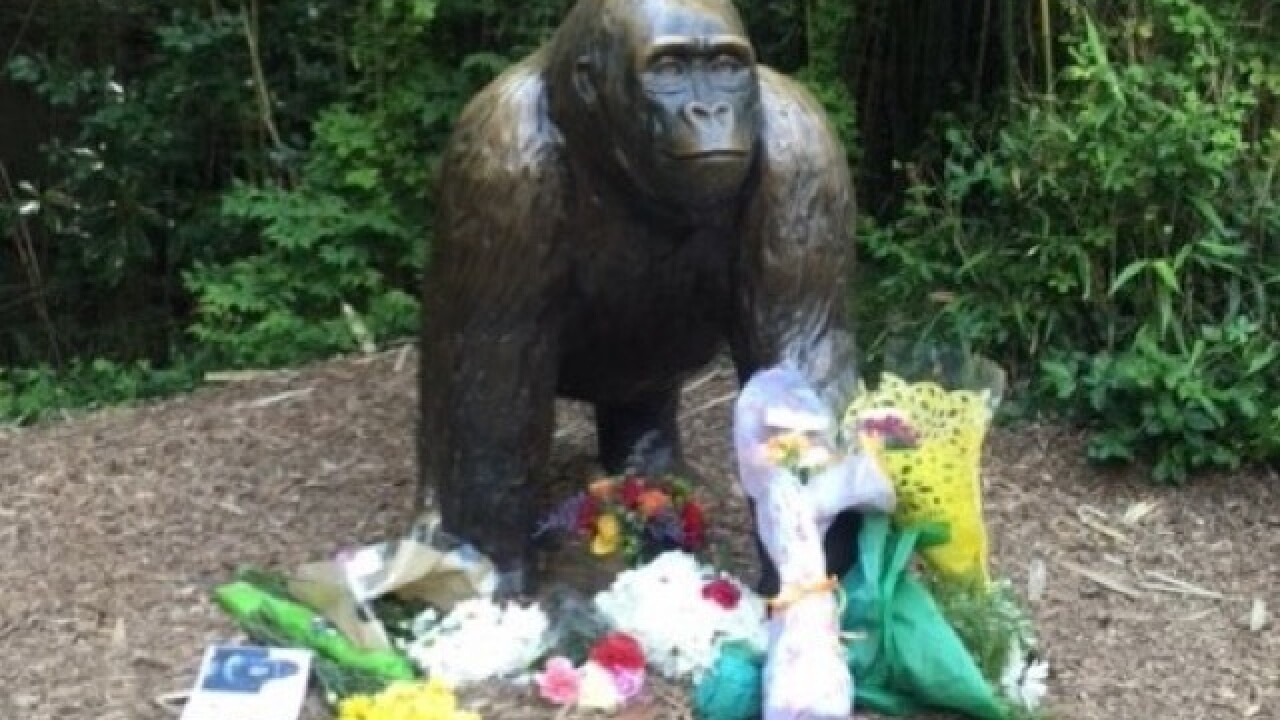 CINCINNATI -- More than 135,000 people have signed a change.org petition to create a law to hold zoo visitors responsible for the well-being of endangered zoo animals following Saturday's shooting of a 17-year-old silverback gorilla at the Cincinnati Zoo.

Outrage has been building since the zoo's Dangerous Animal Response Team killed Harambe after he picked up and dragged a 3-year-old boy who fell into the gorilla enclosure.

Another petition blaming the child's parents for neglect and calling for them to be investigated has drawn more than 390,000 supporters.

About 50 people gathered outside the zoo here Monday to mourn Harambe and others protested at the Texas zoo where Harambe was born and raised.

Cincinnati police are investigating the incident and criminal charges are possible, according to the following statement from Prosecutor Joe Deters on Tuesday:

Thousands of people have taken to social media to condemn the shooting. Many blame the boy's parents for letting him out of their sight and fault the zoo's security for not adequately blocking the child from getting into the gorilla enclosure. Some said the zoo should have tranquilized the gorilla instead.

The petition for Harambe's Law, created by "Annie Gutierrez of Chicago," called for "legal consequences when an endangered animal is harmed or killed due to the negligence of visitors."

"If this law is enacted, it will not only protect the animals, but will hold individuals accountable for actions resulting in harm or death of an animal," the petition says. The petition specifically mentions zoo-goers -- both parents and children -- as parties responsible for animals' safety.

"No one wants to see any harm come to a human visiting the zoo, but this entire tragedy could have been avoided, had this little boy been properly supervised," the petition says. "It is completely negligent for any man, woman or child to enter an exhibit or restricted area at a zoo, sanctuary or wild animal park. To ensure this never happens again, we would like to enact Harambe's Law, that if at anytime this shall occur, the negligent party and or party's be held financially and criminally responsible for any harm and or loss to an animal, specifically when said animal is Critically Endangered."

The other petition, created by "Sheila Hurt of Cincinnati," puts all the blame on the boy's parents and even asks if their "negligence is reflective of the child's home situation."

"It is believed that the situation was caused by parental negligence and the zoo is not responsible for the child's injuries and possible trauma. We the undersigned want the parents to be held accountable for the lack of supervision and negligence that caused Harambe to lose his life. We the undersigned feel the child's safety is paramount in this situation. We believe that this negligence may be reflective of the child's home situation. We the undersigned actively encourage an investigation of the child's home environment in the interests of protecting the child and his siblings from further incidents of parental negligence that may result in serious bodily harm or even death. Please sign this petition to encourage the Cincinnati Zoo, Hamilton County Child Protection Services, and Cincinnati Police Department hold the parents responsible.

People for the Ethical Treatment of Animals (PETA) said the "gorilla enclosure should have been surrounded by a secondary barrier between the humans and the animals to prevent exactly this type of incident."

Zoo officials said they plan to conduct their own investigation to find out how the child was able to enter the exhibit. The zoo said the Gorilla World exhibit has not had a "barrier breach" since its 1978 opening.

The boy was hospitalized with injuries that were not life-threatening, police said, and he was released within a few hours.

The zoo decided to put down Harambe rather than tranquilize him because the boy was in danger and the tranquilizer would not have taken effect immediately, zoo director Thane Maynard said. Two other gorillas in the exhibit were called back inside.

Maynard called it "a life-threatening situation" for the boy.

The only statement released from the boy's family thanked the zoo -- and God -- for saving the child.

"We are so thankful to the Lord that our child is safe," their statement said. "He is home and doing just fine. We extend our heartfelt thanks for the quick action by the Cincinnati Zoo staff. We know that this was a very difficult decision for them, and that they are grieving the loss of their gorilla."