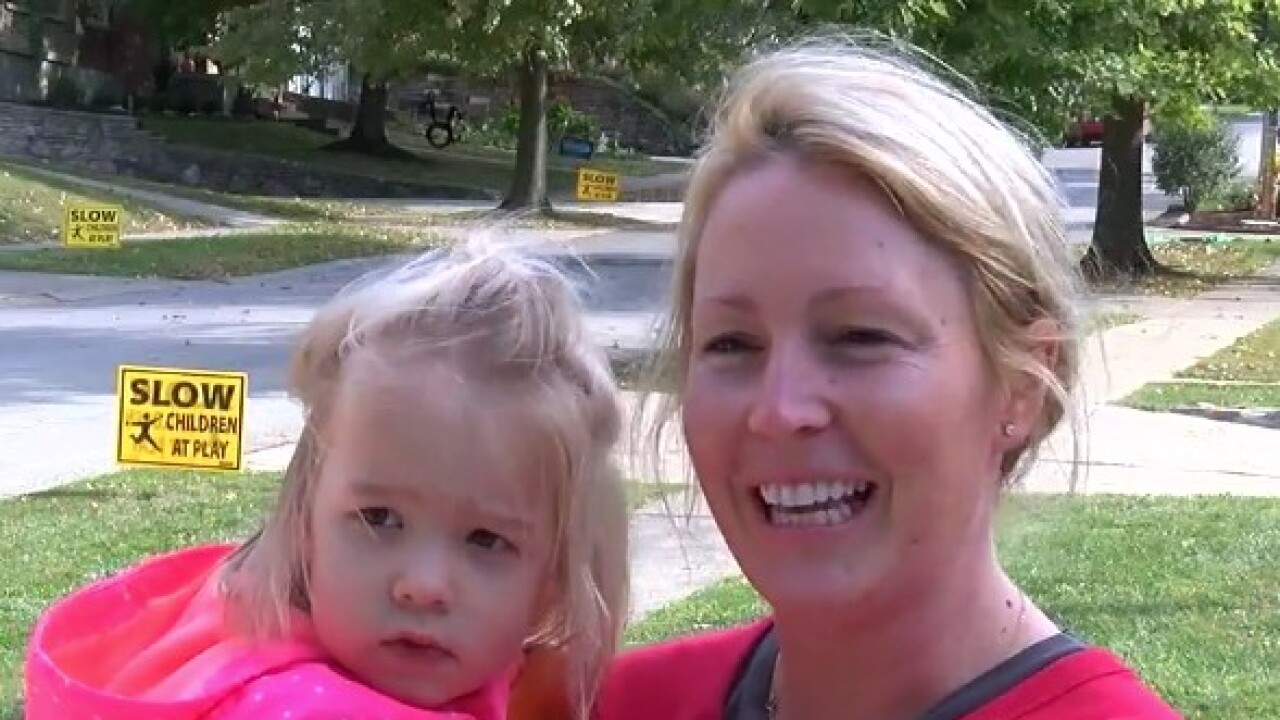 Copyright 2019 Scripps Media, Inc. All rights reserved. This material may not be published, broadcast, rewritten, or redistributed.
WCPO
Melissa Willig and her 2-year-old daughter Iris.

PARK HILLS, Ky. — A mother of three fearing the speeding traffic on her street decided to take action to protect her kids and others.

First, Melissa Willig, who has lived on Audobon Road for three years, put up “Slow, Children At Play” signs.

“There’s a lot of neighborhood kids that are out playing,” said WIllig, who says she won’t let her 2-year-old Iris out of her sight.

“They’re across the street from each other. They want to cross. They’re just so little that they are not thinking,” Willig said.

She put up the signs in September.

“That slowed people down for maybe a week,” she said.

So Willig went a step further. She distributed a petition asking Park Hills to install a temporary speed hump.

“The temporary ones are a whole lot less — like a tenth of the cost — and they can be screwed down and taken back up,” said Park Hills Mayor Kathy Zembrodt.

The speed hump has been more effective, Willig said.

“About 90% of cars are slowing or stopping for the hump. I think it’s just about 10% who fly through it still or they go around it,” Willig said.

Zembrodt said Willig needed 50% resident approval for the speed hump and she got 90%.

Jim Jenkins, who has lived on Audobon Road for more than 50 years, has noticed the change, even though the speed hump only covers one side of the street.

“It’s easy because it’s going downhill,” Jenkin said. “It’s easy to pick up speed without realizing that you’re doing it. It forces people to touch the breaks, which is what they wanted.”

“It’s definitely working,” Willig said. “I wish we could slow everybody. But we’ll take what we can get.

“I do feel better about it,” Willig said. “I still feel like I have to be super vigilant if they’re anywhere in front of the house.”

She hopes the city will install more speed humps.

“Ideally we could use two and I think they could be larger, table-sized and just really clearly marked — more permanent,” Willig said.

The mayor said delivery trucks, not residents, are usually the speeders on these residential streets.

“There are not a lot of residents speeding,” Zembrodt said. “What I’ve heard is mostly delivery trucks are in a hurry. I’ve seen it on my own street!”

The mayor wants to install speed humps on other streets. In addition, 10 crosswalk stop signs given to the city for free by “Devou Good” will be installed along schools and busy streets.

“This is all in trying to make it a safer, more walkable city for the children and adults as well,” Zembrodt said. “You have strollers and people are just distracted with their driving now, so I do think this is going to be a really good thing.”