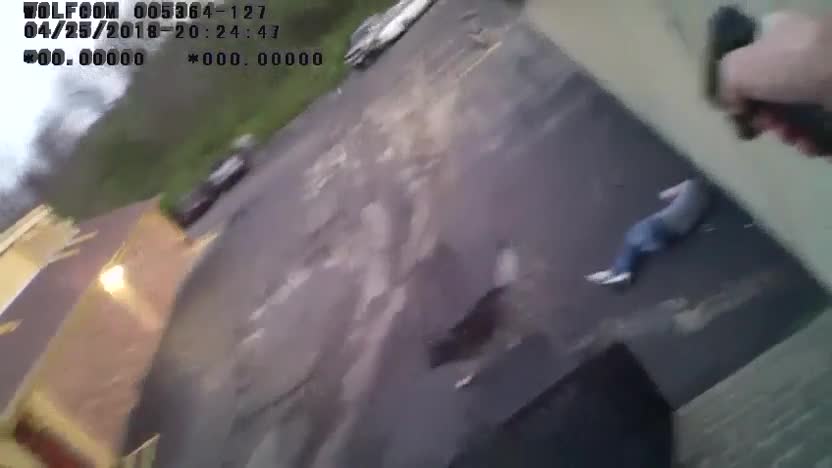 ERLANGER, Ky. — A Florence man who led police officers on a chase through a restaurant and pointed a gun at them when cornered was sentenced to 15 years in prison Monday, according to a Facebook post made by the Erlanger police department.

Dexter Helton, 41, pleaded guilty to felony counts of wanton endangerment and fleeing police. Officers began pursuing him April 25, 2018, in connection to an active felony drug warrant. They found him in Peecox Bar and Grill, which he fled through a back door before aiming his weapon at them.

A body camera recording posted alongside the department’s announcement sheds more light on what happened next.

The recording, which was captured from the perspective of an officer waiting behind the building, shows Helton emerging from the restaurant and breaking into a sprint when the officer orders him to put his hands in the air.

A K9 sprints after him.

Helton does not. He runs down a set of stairs connecting Peecox’s parking lot to that of the neighboring Econolodge motel while the officer continues to shout.

The camera is not on Helton at the moment the officer fires six shots at him.

At least one hits. He collapses, his gun flying several feet across the pavement, and the dog circles his body. The recording ends.

Helton would quickly be transported to the University of CIncinnati Medical Center with what a news release described as “critical injuries.” None of the officers were injured.

“We want to thank the Kentucky State Police and the Kenton County Commonwealth’s Attorney’s Office for their professionalism in regards to this case,” the Erlanger Police Department wrote on Facebook. “We especially want to thank Sgt. Chad Girdler, K9 Asco and Officer Greg Pohlman for their valor and heroism they displayed during this incident.”