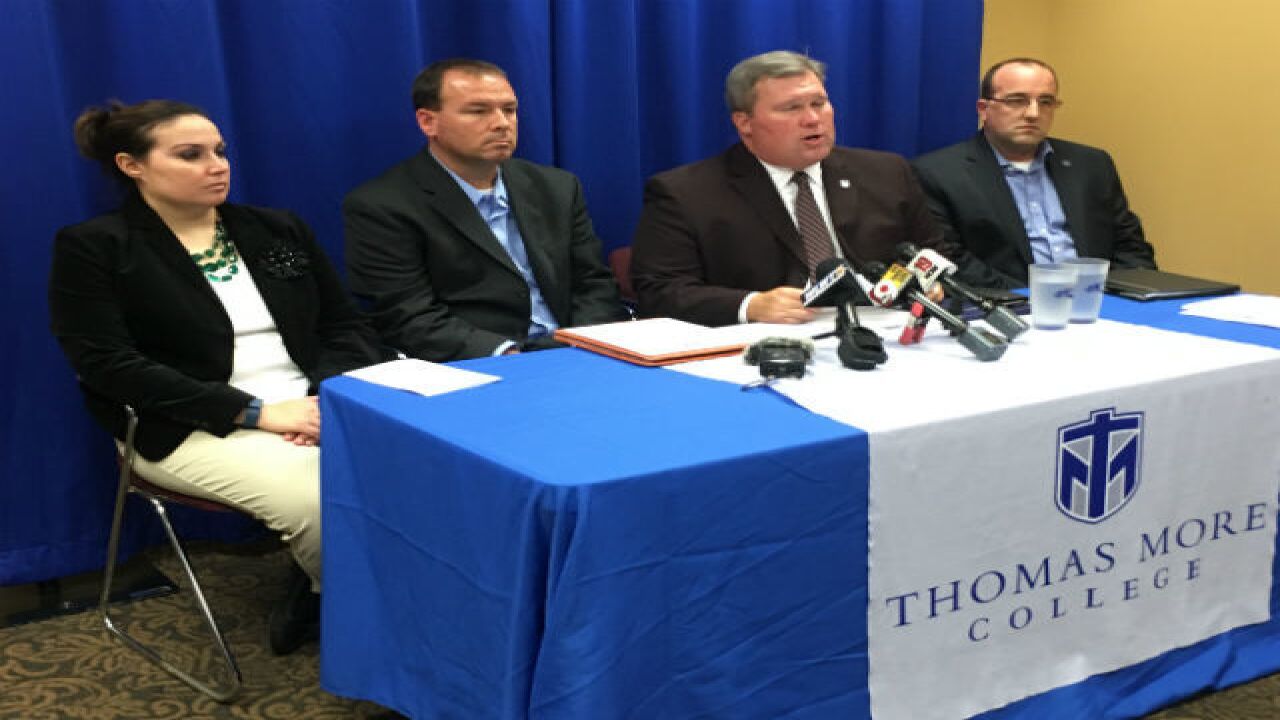 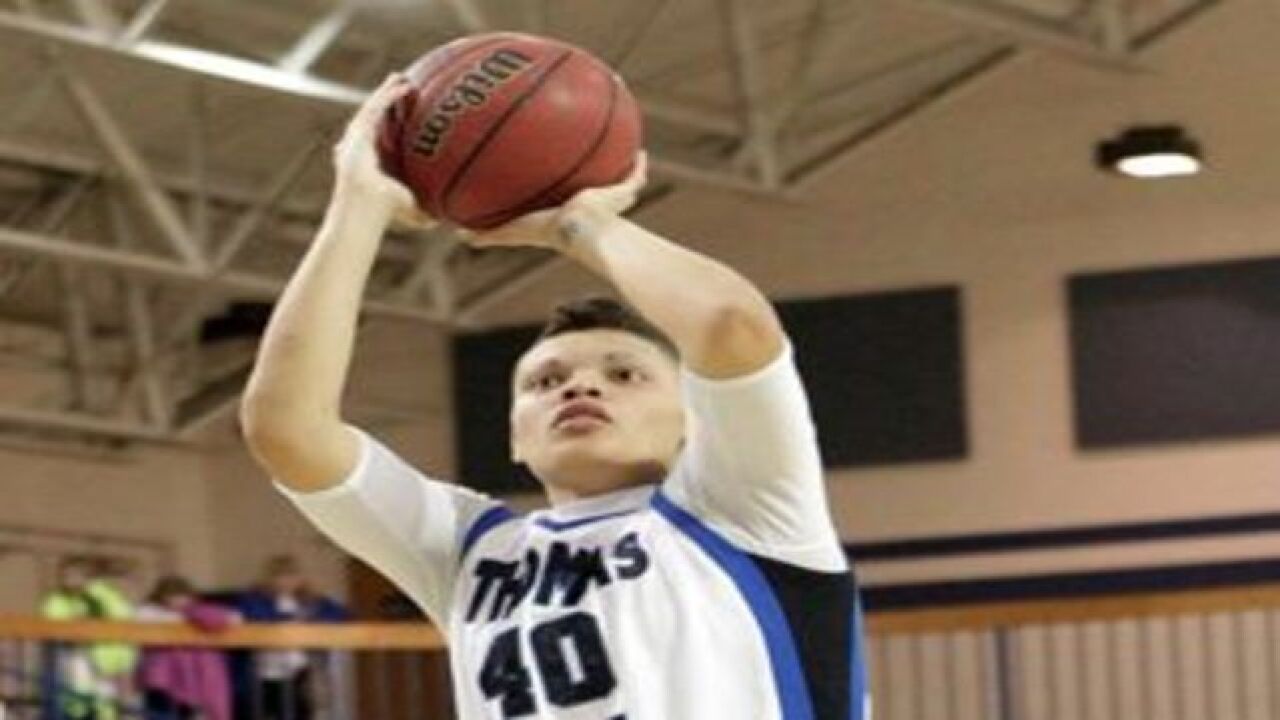 What an absolute joke. The NCAA can take what they want but the memories and friendships will last a lifetime! #StillHave2Rings

The NCAA found that Sydney Moss, Thomas More's three-time Division III Player of the Year, was ineliglble during the 2014-15 season, the college announced Tuesday.

"What an absolute joke," Moss tweeted. "The NCAA can take what they want but the memories and friendships will last a lifetime!"

Moss lived cost-free with a former part-time assistant coach, Jerry Allen, while recuperating from March 2014 knee surgery. The housing arrangement - ruled an impermissible extra benefit by the NCAA  - started in April 2014 and continued for the rest of the calendar year, according to the NCAA report.

The NCAA ordered Thomas More to vacate its 2015 Division III title and all of its victories during the 2014-15  season, and imposed additional penalties on program. Moss' Player of the Year award for 2014-15 and her stats will be stricken from the records. But it didn't ban the Saints from the 2017 tournament.

Thomas More president David Armstrong said the penalties resulted from "the honest though mistaken belief" that Allen's long-time, mentor-mentee relationship with Moss excluded their housing arrangement from being an NCAA violation.

The NCAA Division III Committee on Infractions found that:

"I take full responsibility for not recognizing the gravity of the situation," Hans said at a news conference Tuesday afternoon at Thomas More. "... There was no intention to gain a competitive advantage. We got it wrong and I take ownership of that."

According to the NCAA report, Moss lived alone in an upstairs, off-campus apartment and both she and Allen "had concerns about her physical limitations [after surgery]. They were also worried about the safety of the neighborhood."

Moss' mother stayed with her for about a week, and Moss stayed briefly with a friend before returning to her apartment, the NCAA report says. Then she moved into Allen's house.

READ the report from the Division III Committee on Infractions.

“She went to the closest family member, in her words, that was there - which was the Allen family.”

Armstrong said there was "no deliberate violation of NCAA rules" by any Thomas More employee, and he blamed ambiguity in the NCAA rules regarding a pre-existing relationship between coach and player.

"Even the NCAA staff expressed uncertainty" over it, Armstrong said. He called it a "subjective NCAA interpretation."

Armstrong said he and Hans met with this year's team shortly before noon Tuesday and gave them the bad news. The defending champion Saints open their season tonight.

"It was very emotional. It was tough," Armstrong said of the meeting. But he said the players would overcome this "adversity."

For as good as they are as a basketball team, Armstrong said, "our players are 1,000 times better ladies and our coaches are 1,000 better people."

Moss, who is living in West Virginia, did not attend the news conference.

The NCAA and Thomas More imposed the following additional penalties against the college:

The NCAA estimated the impermissible extra benefit was worth $5,000 including housing, meals and brief use of a vehicle. The NCAA said it found that the violations were "major," though Hans asserted that his violation was "secondary."

"They came back with five major violations.  We could have taken this to summary disposition and imposed penalties, but one of the violations said that Jerry Allen committed unethical conduct," Armstrong said.

"We could have easily thrown him under the bus, but that’s not the kind of institution we are.  We found no evidence of unethical behavior, so we asked the enforcement staff to drop that charge and then we'll move on to summary disposition. They chose not to, so we asked for a hearing on the committee on infractions and they dropped the unethical charge after the hearing."

Here is a summary verbatim from the report (it did not identify Moss, Allen or Hans by name):

"While the student-athlete was living with the former assistant coach, three staff members learned of the arrangement and assumed it was permissible without checking to see if it would be allowed under NCAA rules. Because the staff members did not recognize the arrangement as an extra benefit, the student-athlete competed an entire season while ineligible.

"The head coach failed to monitor his former assistant coach when he was unaware of the living arrangement until the former assistant coach brought it to his attention. He approved of the situation until the athletics director learned of it and decided to end it due to the appearance of a student-athlete living with a coach. The head coach did not promote an atmosphere for compliance when he did not follow department protocol and seek clarification about the living arrangement with the athletics director.

"Throughout the entire process, individuals at the college misunderstood NCAA rules and believed the arrangement was permissible. The committee found the misunderstandings stemmed from the college’s failure to provide adequate rules education. Because of the lack of education, staff members were unable to recognize that the arrangement was impermissible and did not consult with others to make sure it followed the rules. Because it did not provide rules education and did not recognize the impermissible living arrangement, the college did not monitor its women’s basketball program."

Allen and his family had  a long-time relationship with Moss going back to when she played on a seventh-grade AAU team and Allen coached an opposing team, the report says. Moss joined Allen's team the next season and hung out with his son at their house and played video games. Allen and his wife considered Moss  "a big sister" for their son.

Allen moved his family to California, but they stayed in touch with Moss. After starring at Boone County High School and winning Kentucky's "Miss Basketball," Moss took a basketball scholarship at the University of Florida, and Allen moved back to the Tri-State and became a volunteer assistant at Thomas More. After Moss left the D-I school, Allen said he actively recruited her for Thomas More, according to the NCAA report.

After learning of possible violations, Thomas More declared Moss ineligible on Nov. 18, 2015, and immediately sought her reinstatement.  The NCAA reinstatement staff then allowed her to play during the 2015-2016 season "with conditions," the report says.

The NCAA said it first learned of possible violations from a "confidential source" in February  2015. After getting more information from a source that June, the NCAA contacted Thomas More about the matter that August, and Thomas More submitted a written response in September.

Armstrong criticized the NCAA for taking seven months to notify the school and said the allegations "could have been investigated and addressed"  before the 2015 Division III tournament if Thomas More had been notified.

Armstrong pledged that Thomas More "would promote itself as a leader in NCAA compliance" and work to clear up ambiguities in the rules.