U.S. Attorney on drug cartels: 'Go after their money' 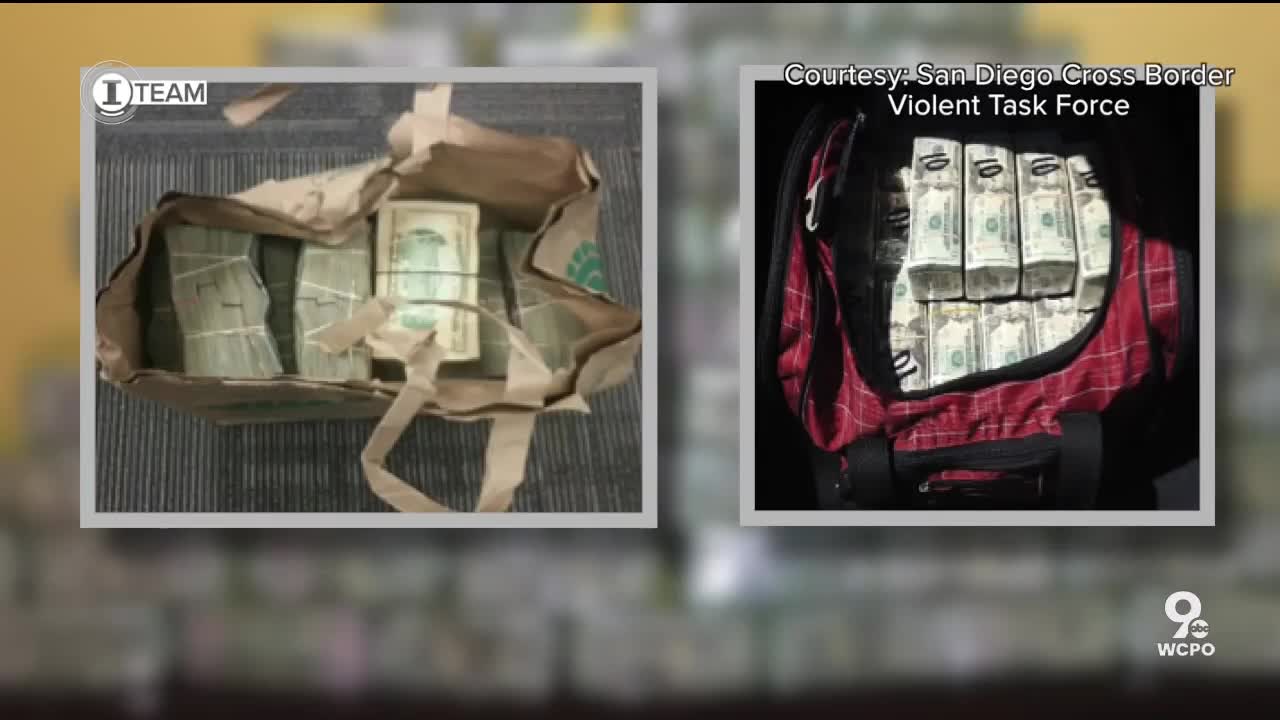 U.S. Attorney David DeVillers says one of the keys to disrupting drug cartels is stopping the flow of money from America to foreign drug traffickers. WCPO examines how investigators are doing that.

MIDDLETOWN, Ohio — As the U.S. Coast Guard closed in on the drug smugglers' boat near the Galapagos Islands, veteran federal prosecutor David DeVillers said he could see the suspects tossing their valuable cargo into the ocean.

That intercept on August 18, 2017, seized 720 kilograms of cocaine, according to a federal indictment in the case.

The DEA said the seized cocaine had a street value of $25 million.

DeVillers, now the United States Attorney for the southern district of Ohio, said it was the first time he had watched a live video feed of a drug bust.

"It was satisfying seeing us get that stuff that never came to America," DeVillers told the WCPO 9 I-Team. "But in the end that's really just a drop in the bucket."

While drug busts are important, DeVillers said it's also critical to disrupt the flow of illicit drug profits from America back to the cartels that supply the drugs.

"Really importantly, we have to go after the money," DeVillers said.

In an attempt to better understand the challenges facing investigators and how they are trying to track and disrupt the finances of drug cartels, the I-Team reviewed search warrants and other key public documents in several dozen federal money laundering investigations in Southwest Ohio, Southeast Indiana and Northern Kentucky.

Our examination of those records found:

"It's not the days of Scarface where people are bringing duffel bags full of money into a bank," said Mauricio Jimenez, the DEA agent-in-charge of the Columbus, Ohio office. "Money laundering is incredibly complex."

In September 2015, an informant approached the San Diego FBI about a money laundering operation used by a criminal organization in Culiacan, the capital of the State of Sinaloa, Mexico.

The I-Team's review of those court documents reveal an undercover agent, posing as the manager of a money laundering group, gained the trust of individuals involved in hiding and transferring drug profits from the U.S. to Mexico.

In 2017, local agents posing as money launderers in Cincinnati, Dayton and Lexington collected hundreds of thousands of dollars in cash from local drug trafficking organizations that directed the undercover agents to transfer the money to Mexican criminal organizations connected to the Sinaloa Cartel, according to court records.

The FBI deposited the drug money into bank accounts controlled by the FBI, which allowed investigators to track it back to Mexican accounts used by organizations in Sinaloa.

The I-Team discovered these details in public court records filed in U.S. District Courts in California and Ohio.

DeVillers declined to discuss the case.

"To tell you how they did that is probably something I shouldn't do," DeVillers said. "We don't want the bad guys to know how we do what we're doing."

The Department of Justice says the investigation resulted in the seizure of tons of drugs, millions of dollars and criminal charges against 75 people in the U.S. and Mexico.

“Shutting down illegal cash proceeds returning to the drug cartels is like stopping the blood flow to the heart of these major criminal enterprises," said Scott Brunner, the Special Agent-in-charge of the FBI's office in San Diego.

In December 2017, a federal grand jury in Cincinnati indicted 12 individuals in the case, including Donte Holdbrook the alleged ringleader of a heroin and fentanyl trafficking organization based in Middletown.

After Holdbrook's arrest, "overdoses in Middletown dropped by approximately one-third," according to a January 2020 court filing by Assistant U.S. Attorney Karl Kadon. "The government submits it was not a coincidence."

In October 2018, Holdbrook pleaded guilty to Conspiracy with Intent to Distribute 400 grams or more of a mixture that included fentanyl and more than 1 kilo that included detectable levels of heroin.

Holdbrook was scheduled to be sentenced in February, but Judge Black issued a continuance because Holdbrook's attorney was trying to find documentation to confirm Holdbrook had a mental disability. Evidence of a disability could help Holdbrook get a lesser sentence.

The I-Team asked Holdbrook's attorney, Christopher Pagan, to comment on the case. We left a voicemail message and sent Pagan an email. He has not responded.

In February, Judge Black sentenced Raul Trejo of Middletown to 14 years in prison for laundering drug money from the Holdbrook organization to Sinaloa.

The DEA's Jimenez says drug cartels have targeted Ohio because of the I-75 corridor and the interstates that run through Columbus, which allow drug shipments to reach major cities in all directions in less than four hours.

"We're seeing organizations grow to a point that I never expected in southern Ohio," Jimenez told the I-Team.

Local business owners have also been charged with laundering money from drug trafficking.

Last November, federal prosecutors announced grand jury indictments against 37 people in connection with a case that involved the alleged laundering of $2.5 million through Tri-State Jeweler on Race Street and $800,000 at Nationwide Auto on Vine Street in Cincinnati.

According to the DEA, government agencies seized more than half a million dollars in cash, 19 pounds of fentanyl, three pounds of heroin, 100 pounds of cocaine, 42 pounds of meth and 47 weapons during the investigation.

Attorneys for several defendants who are identified as individuals responsible for those businesses did not respond to the I-Team's requests for comment.

DeLeon-Baltazar is the second defendant in an alleged cocaine smuggling conspiracy to be extradited to the Southern District of Ohio, according to the U.S. Attorney's Office.

According to a federal indictment, DeLeon-Baltazar, Golon-Valenzuela and their co-conspirators "coordinated the shipment of thousands of kilograms of cocaine from Colombia, via sea and land, through Central America and Mexico to the United States."

DeLeon-Baltazar pleaded not guilty. He's detained pending trial, according to court records. His attorney did not respond to a request for comment.

"I can't talk about it," said Golon-Valenzuela's attorney, Steven Nolder.

"He had never set foot in the United States" before that, Nolder said.

Under the U.S. Maritime Drug Law Enforcement Act, federal prosecutors established U.S. District Court in Columbus as the jurisdiction for the case because Golon-Valenzuela "entered" the country there.

In 2017, Ben Glassman, who was the U.S. Attorney when the grand jury issued the indictment, said the case showed that federal prosecutors in the southern district of Ohio were willing to "go as far as we have to go to stop the drugs" from reaching America.

"My client is a spoke on the wheel" of the alleged conspiracy, Nolder told the I-Team. "He took a substantial step to complete the crime. He paid the money. He's out $190,000, but he didn't get a gram of cocaine."

Court records show the change of plea hearing for Golon-Valenzuela has been rescheduled three times due to court restrictions resulting from COVID-19. The hearing is now scheduled for June 17.

In the indictment, the grand jury identified several attempts to smuggle massive amounts of cocaine into the U.S.

Nolder said Golon-Valenzuela was not involved in those incidents.

One of the failed drug smuggling efforts listed in the indictment happened near the Galapagos Islands in 2017. That's the same intercept DeVillers watched on a live video feed.

The four men arrested during that seizure pleaded guilty. They received sentences ranging from 60 to 66 months in prison.

The indictment against Golon-Valenzuela and DeLeon-Baltazar is redacted and has a blank space above their names.

Based on the I-Team's previous conversations with federal prosecutors and agents on unrelated cases, the blank area on the indictments indicates other individuals have been indicted, but they're not being publicly identified because investigators believe the release of those names will compromise the ongoing investigation.

DeVillers said the goal of these investigations is to aim high.

"We have to go after the cartels themselves," DeVillers told the I-Team.

Dramatic seizures, like the one DeVillers saw unfold on the high seas, play a role in disrupting drug trafficking into the U.S.

But DeVillers said it's also critical to track and disrupt the flow of drug money back to the suppliers.

"If the money couldn't get back to the people supplying it, then there would be no incentive for them to send drugs to America."