Cincinnati woman: "I go to bed worrying about it." 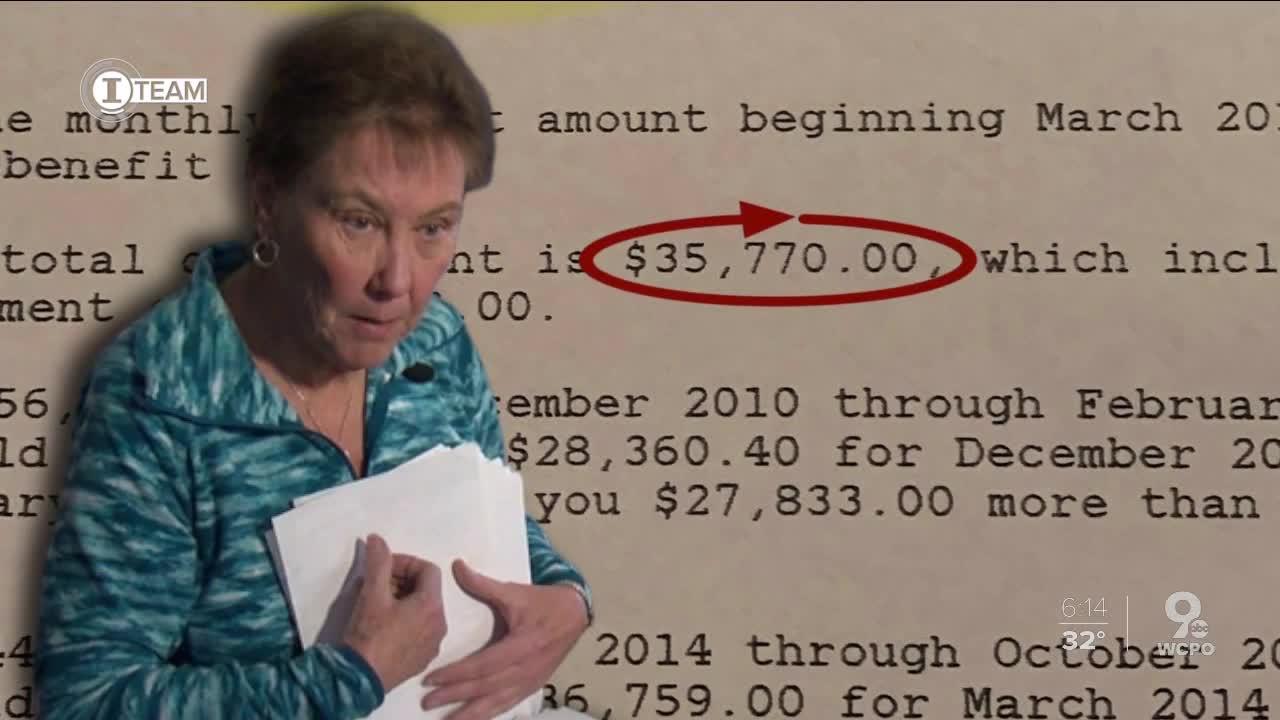 The Social Security Administration's "mistakes" force retirees to refund over-payments made by the SSA. A Cincinnati woman describes the "nightmare" of dealing with the SSA after it claimed she needed to refund $35,770 in benefits. 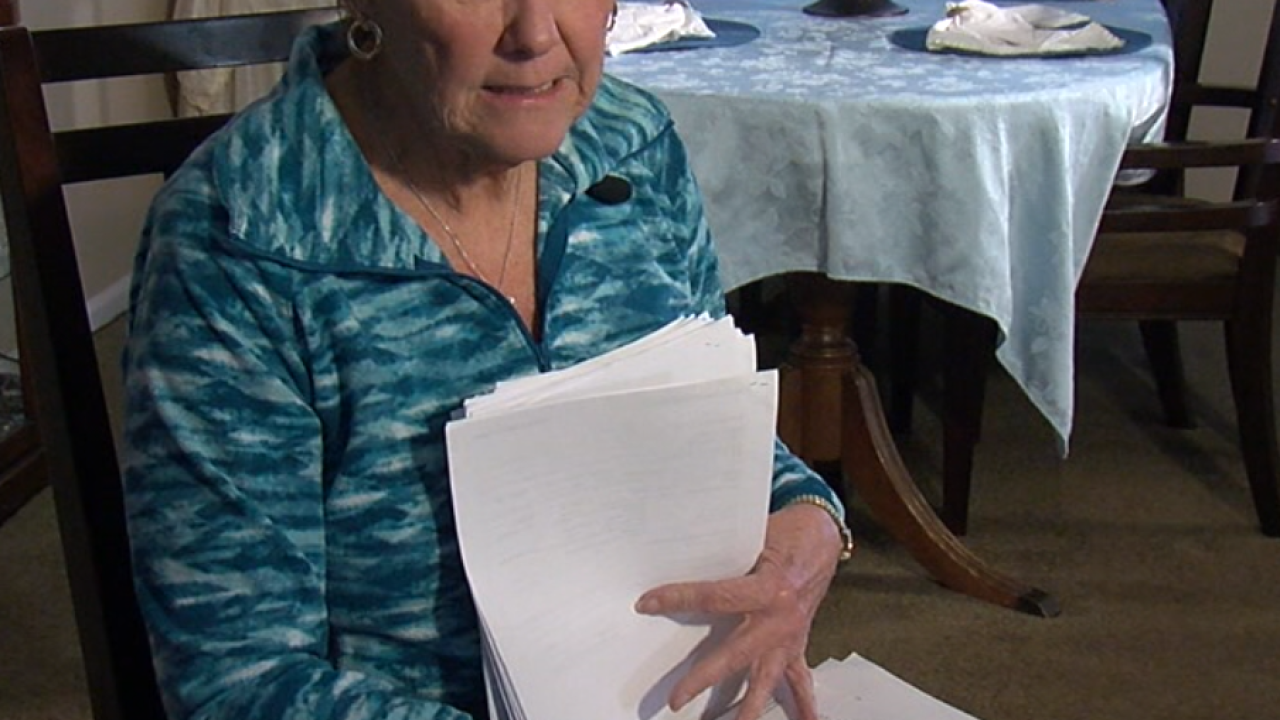 CNCINNATI — Margaret Fitzwater insisted she wasn't going to cry, but her eyes quickly turned red and watery as the 69-year-old grandmother of six described the impact of unknowingly being overpaid $35,770 in monthly Social Security benefits, then having the Social Security Administration demand that she pay it back.

"I go to bed at night worrying about it," Fitzwater said. "I just want it to end."

Fitzwater, who worked a combined 37 years at Cincinnati Gas & Electric and the United States Postal Service, said the confusion over her Social Security benefits began in March 2011.

That's when she received a letter from the agency claiming it had overpaid Fitzwater $4,345 in benefits due to not including her workers compensation payments.

In an April 2011 letter the SSA sent to Fitzwater, the agency confirmed she had paid it back.

"I assumed when I paid them money back in the very beginning that they had it all figured out," she said.

The problem is not unique to Fitzwater. In a November 2019 audit, the Office of the Inspector General expressed concerns that the Social Security Administration was struggling with overpayments, its collection process and long delays on waivers and hearings. The audit revealed that the SSA estimated it had made $8 billion in improper payments in 2018 alone.

Williams is not Fitzwater's attorney and we did not discuss the case with him, but he has represented clients in hundreds of disputes with the Social Security Administration. He also worked as an attorney for the SSA's Office of Hearings and Appeals.

"They want to do a good job," Williams said. "Part of the problem is I don't think they have enough personnel to do the good job."

The audit also identified mistakes in calculating income of beneficiaries – which is what happened to Fitzwater – by nearly $1 billion in 2018. The same audit estimated that SSA would wrongly collect an additional $671 million if it didn't fix mistakes resulting from outdated computer systems and understaffing.

Fitzwater told the I-Team she was confused by some of the notifications she received from the SSA.

In April 2013, the SSA told Fitzwater it owed her money and that it would increase her benefits.

Then, in a May 2014 letter, she was notified that she had been paid $27,016 too much because of what the agency said was unreported workers comp.

"I feel like the right hand doesn't know what the left hand is doing," Fitzwater said.

In December 2018, after waiting 53 months for a hearing on her case, an administrative judge determined Fitzwater still owed $30,000 for excessive benefits.

According to Fitzwater's records, the SSA is withholding $804 from her monthly Social Security benefit of $2,368 to refund the excess benefits. Fitzwater said she also receives about $3,700 a month in workers comp benefits.

In a December 2019 letter to the SSA, Fitzwater's attorney, Albert Brown Jr., told the agency it had violated her rights by withholding benefits without ruling on any of her three requests for a waiver on paying back the money.

The IG audit published last November found the SSA withheld benefits before allowing beneficiaries to exhaust their due process.

Brown said the agency had not responded to any of the three letters he mailed to the agency since June 2019.

The I-Team emailed requests for comment to Dan Nguyen, the Regional Communications Director for SSA.

"Privacy laws prevent us from disclosing information on a specific person's record," Nguyen wrote in an email response to WCPO 9.

"if someone doesn't agree with the overpayment decision, or believes the amount is incorrect, they have the right to appeal that decision," Nguyen wrote.

"They also have the right to ask Social Security to waive collection," Nguyen wrote. "Social Security does not recover the overpayment until we make a decision on the request for an appeal or waiver."

Root of the SSA's problems

The root of the Social Security Administration's problems has remained the same for many years, according to audits the WCPO I-Team reviewed.

Outdated technology that is not up to the challenge of an agency distributing $1 trillion in annual benefit payments is one culprit. Another is increased workload, as well as a "sharp decline in overall staff experience."

Fitzwater said SSA employees were patient with her, but often seemed tired and frustrated, too.

"They say they're understaffed and they're sorry, and that doesn't help me," Fitzwater said.

Fitzwater called the I-Team after we reported on Curtis Joash, a Cincinnati man who spent his dead mother's Social Security benefits for 27 years before the SSA finally found out in 2017.

The former Cincinnati truck driver and pastor pleaded guilty last year to wire fraud and theft of public money after he admitted to stealing more than 300 monthly Social Security payments mistakenly paid to his mother, Novellar Butler. In his plea agreement, Joash admitted to stealing a total of $187,665. On Jan. 13, U.S. District Judge Michael Barrett sentenced Joash to five years of probation, including six months of home confinement.

"I'm the other side of the story," said Fitzwater, who believes the SSA moves too hard and fast to recover overpayments to people like her, and has failed to aggressively detect and stop fraud.

In its audits, the IG discusses steps taken by SSA to reduce errors and improve performance, including the use of new online tools that allow recipients to update their information quickly so that SSA can reflect those changes as soon as possible.

SSA has also increased its use of data provided by other agencies, including the Department of Labor, which had information about Fitzwater's workers comp payments.

That data prompted the SSA's review of her Social Security benefits.

According to Fitzwater's records, she will resume receiving her full monthly Social Security benefits in August 2022.

"I just want what I worked my whole life for, you know," Fitzwater said.