Pressure to shrink: Will Macy's downsizing mean the loss of its Cincinnati headquarters?

Macy's 'likely to end up a coastal chain' 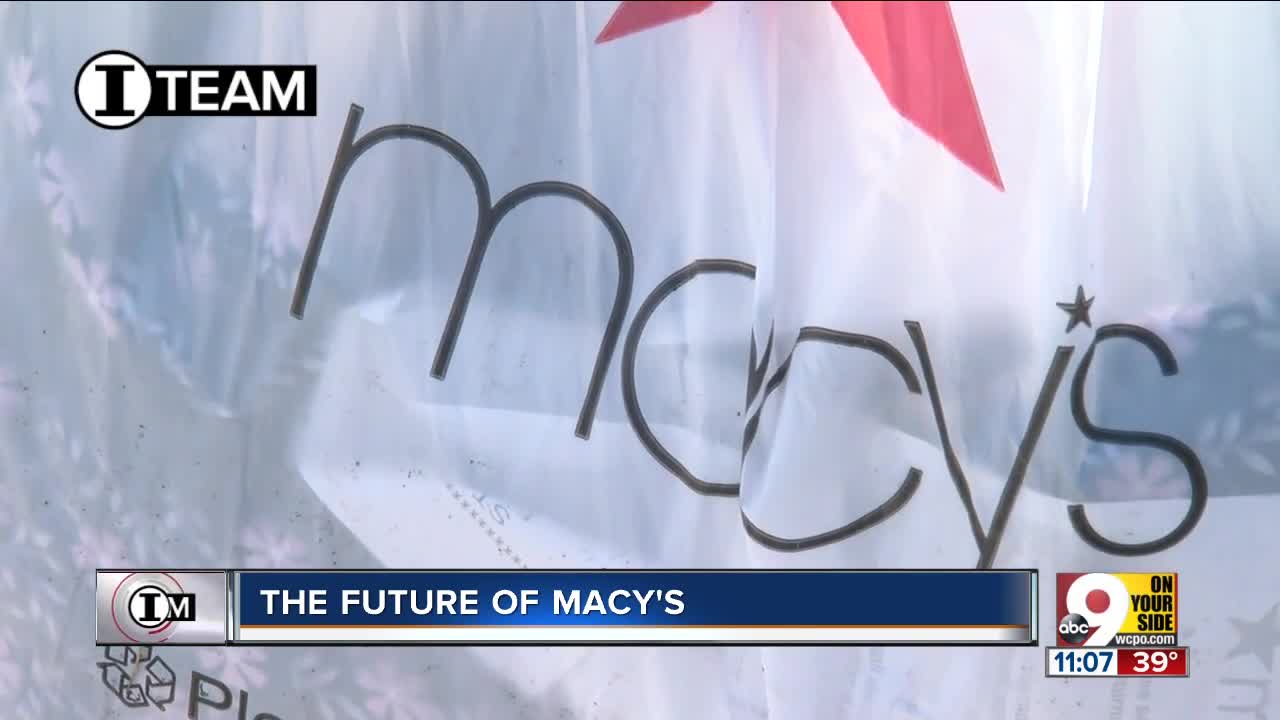 After seven quarters of growth, Macy's is under pressure to downsize again. Will it spell the end of Cincy HQ?

CINCINNATI — After seven quarters of growth, Macy’s Inc. is in downsizing mode again. Does that mean Cincinnati’s third-largest company might pull the plug on its downtown Cincinnati headquarters?

Macy’s declined to answer questions about its plans for Cincinnati. But it has taken several steps in the last few years that could threaten the corporate home for Macy’s since 1994, when it was acquired by Cincinnati’s Federated Department Stores Inc.

“Now that the executive team is fully located in New York, we would think that that adds to the vulnerability of the Cincinnati location,” said Terry Kelly, an investment advisor and principal at Bartlett Wealth Management. “When you’re physically located somewhere, just operationally having your team around you (is important). Having access to a broad national press is an example, when you’re trying to announce things. It makes a lot of sense to be in one location. And frankly that favors New York.”

Cincinnati gets a lot of mileage out of its Macy’s headquarters status. It’s one of nine Fortune 500 companies based in the region, a fact that is often touted by economic development professionals as they try to recruit new companies. Macy’s has about 3,600 local employees, including several hundred at 7 West Seventh Street.

Macy’s is an important corporate donor to philanthropic causes, including ArtsWave, United Way, the University of Cincinnati and 39 other organizations that Macy’s lists as “local partners” on its website.

But none of that will keep the Wall Street wolves at bay when Macy’s is asked to confront its longest-running problem: The loss of retail market share to digital and discount operators, including Amazon, Costco, TJ Maxx and Target.

“We believe no-moat Macy’s is struggling to stay relevant,” wrote Morningstar analyst David Swartz in a Dec. 3 note to investors. “Its large fleet of almost 700 full-line stores that average 180,000 square feet limits its options. While Macy’s operates stores in most top-tier malls, it also operates hundreds of stores in weaker malls. It does not need its vast selling space.”

Macy’s will deliver new details on its real estate strategy in a Feb. 5 analyst meeting. In November, CEO Jeffrey Gennette said the company is seeing sales growth from its strongest 150 stores but lower-than-expected mall traffic caused revenue to falter in weaker malls.

“Where we’re investing and our mall developers are investing, we’re getting great outcomes,” Gennette said. "So, when you look at the Growth 150 strategy, which basically touches over 50 percent of our brick and mortar business, we’re complete with all that work and we’re taking revitalized stores into the fourth quarter with us. And in most cases, you’ve also got mall developers who have also enhanced those mall properties.”

“We’ve been watching the trend across our malls for quite some time, specifically in the C and D malls, which are our neighborhood doors," said Lawton in November before he left Macy’s the following month to become CEO of Tractor Supply Co. "And we did see a steeper decline than we’d anticipated in the quarter. The majority of our business is in the A malls. We’ve talked about that several times and again that is where we’re investing. That is where our growth strategy is having a big impact.”

Those comments caused several analysts to predict a new round of store closures from Macy’s. The Northgate closure was among 28 Macy’s announcements in local media reports all over the country. A Bloomingdale’s store was also targeted for closure.

“That still leaves another 250 to 300 stores without a meaningful strategy,” Credit Suisse analyst Michael Binetti wrote in a Jan. 8 report. “We’re increasing our store closure estimates to (about) 30 stores/yr in 2020-2022 … though we think the ultimate closure announcements could be even higher.”

Shopping center consultant Nick Egelanian thinks Macy’s will close 500 stores in the next five years, including every store in Cincinnati except Kenwood.

“Let’s go by what Macy’s told us themselves in their most recent earnings calls,” said Egelanian, president of SiteWorks in Baltimore, Maryland. “They generate half of their volume from 150 of their stores. Their volume is just under $25 billion. If 150 of its stores generate $12.5 billion in sales, the other 500 also does $12.5 billion. If you do the math, it's not sustainable."

Egelanian thinks Macy’s made “the ultimate mistake” in 2004 when it acquired one of its biggest rivals, the May Corp. in St. Louis. Other department store chains were testing discount formats and luxury concepts while Macy’s phased out iconic banners like Marshall Fields, Filene’s and Lord & Taylor to create a national Macy’s brand. The deal left Macy’s with too much debt and too many stores.

Macy’s outlasted department store stalwarts like Sears because it has some of the industry’s premier locations, a stronger reputation for fashion and upscale brands like Bloomingdale’s and Bluemercury. But if it’s to survive long-term, Egelanian thinks it will have to sever ties with the traditional department-store model.

"It is most likely to end up a coastal chain," Egelanian said. "It will most likely have to get there through a bankruptcy filing at some point. And who knows what that means in terms of where it will be operated from in the future."

Macy’s was emerging from bankruptcy when it was acquired by Federated, an industry consolidator that bought department store chains all over the country for most of its 50-year history in Cincinnati prior to the Macy’s acquisition. In 25 years following the purchase, Federated maintained its Cincinnati address but adopted a two-city headquarters structure. Macy’s CEO has been based in New York since 2003, along with most of its fashion, merchandising and marketing talent. Cincinnati retained legal and accounting functions, along with real estate and human resources executives.

“It’s difficult to imagine that they would move their operations in New York out, simply because of the business that they’re in,” said Kelly, who follows Macy’s because some of Bartlett’s clients own the stock. “On the other hand, when you’ve got the cost in terms of not only employment but actual real estate cost and overhead cost, they have to be much lower here in Cincinnati than they are in New York.”

Macy’s would likely have to boost its payroll by millions of dollars if it relocated all Cincinnati jobs to New York, based on the I-Team’s analysis of job titles held by Macy’s local employees. We used LinkedIn to look up dozens of Cincinnati employees and matched their job titles to the 2018 Occupational Employment and Wage Estimates that the U.S. Bureau of Labor Statistics posted for New York and Cincinnati.

We found 21 different job titles that were all more expensive in New York. The biggest disparity involved real estate property managers, an occupation that pays twice as much in New York. But there were several occupations where the New York premium was less than 30 percent, including commercial designers and human resources specialists. For the 50 jobs we evaluated, the total estimated payroll was $5 million in New York and $3.5 million in Cincinnati.

Macy’s could generate millions of dollars by selling its Cincinnati HQ: The 21-story office tower is worth $21.9 million, according to the Hamilton County Auditor. It would also avoid about $740,000 in annual property taxes. Kelly thinks the downtown headquarters is more vulnerable than the Macy’s credit card processing facility in Mason.

Macy’s shopper Sandra Pizzano fears that may be the case.

“If they’re closing stores down, that means they are not going to have the presence or maybe they don’t care about staying here. I don’t know,” said the Fairfield resident on her way out of the soon-to-be closed Northgate store. “To me it’s frightening. Any big employer that is thinking of a shutdown because their sales are not up there, that’s frightening.”