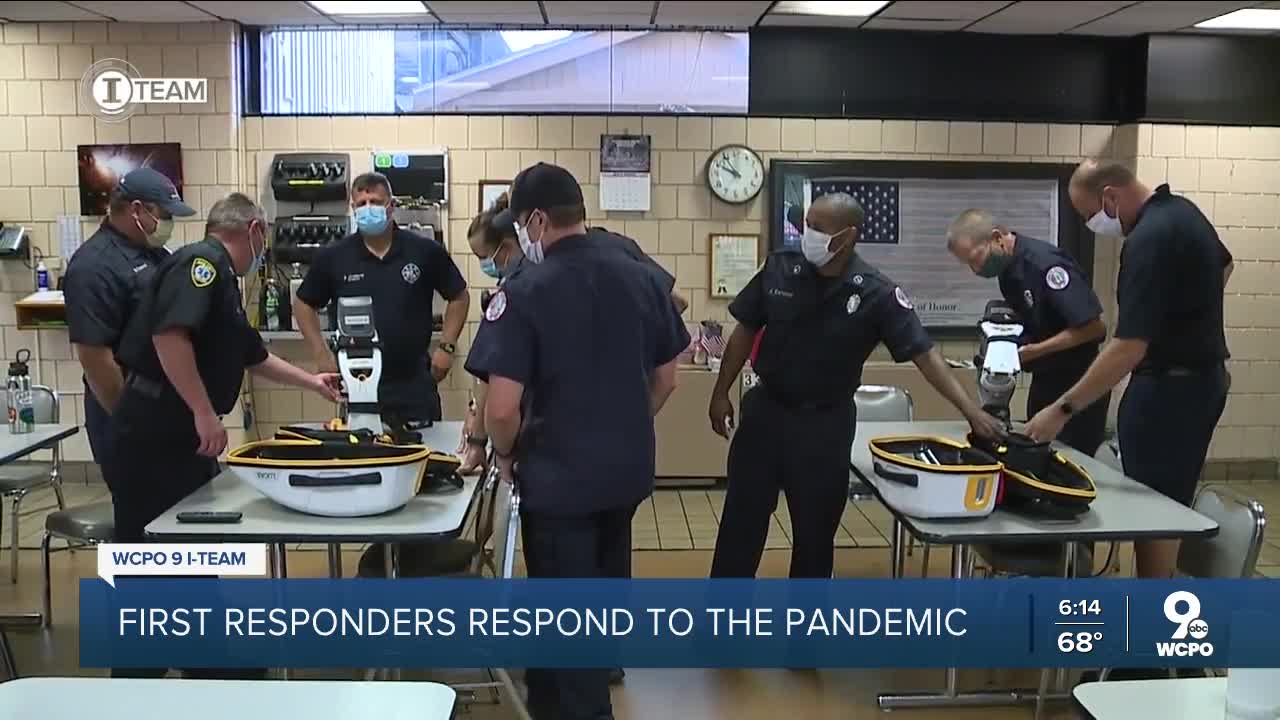 Cincinnati first responders are using new tools and information to reinvent their agencies during the pandemic.

FOREST PARK, Ohio — In the first few weeks of the COVID-19 pandemic, Andrew Knapp, the director of Hamilton County Communications, said he was losing sleep over what could go wrong. He didn't know how it would impact his employees and the critical service they provide.

"COVID hits and we start having game plans of, 'OK, as an organization, what is our weak spot?' Knapp said. "The backup is the one thing that stood out."

Unlike the City of Cincinnati, which handles its own 911 calls, Knapp said Hamilton County has no backup 911 center of its own, even though Hamilton County provides emergency communications for 48 municipal departments.

Knapp said the pandemic "bumped up the sense of urgency" to fill that void.

On June 19 and July 1, Knapp said several 911 dispatchers handled emergency calls for several hours each day using laptops and other communications equipment in a conference room in Forest Park.

This "pop-up 911 center" can be equipped with 15 computers, according to Knapp.

Knapp called the tests "successful," but he admitted dispatchers didn't have access to all online information available through the permanent 911 center, including criminal records.

"The good news is that the equipment exists and we can use it. It's just not the most optimum of circumstances," Knapp said.

Hamilton County's mobile 911 center is one example of how Cincinnati-area first response agencies are reinventing themselves while trying to limit the spread of the coronavirus.

The WCPO 9 I-Team spent several weeks reviewing data provided by emergency communications centers in Hamilton and Kenton counties in an effort to understand the impact of the pandemic on first responders, what they consider their priorities and how they are addressing those challenges.

Covington firefighters are required to wear face masks on every call.

When possible, firefighters also put face masks on their patients.

"It's been very difficult" to get high-quality personal protective equipment like surgical masks, gowns and gloves, Geiger said. "Before (the pandemic) I could order additional supplies in 10 or 15 minutes. Now, I may spend hours searching for a supplier."

Before getting the chest compression equipment, Geiger said firefighters needed to be close to a patient's face while pumping their chest.

"Doing those chest compressions has the potential to expel some air from that patient's lungs that could then put our responders at risk," Geiger told the I-Team.

Geiger said there will be one of the units in each of the department's six ambulances.

After a 15-20% decrease in runs during state-ordered lock-downs in March and April, Covington's firefighters are "back toward our more normal response levels," Geiger said.

"People are feeling, I think, a little more comfortable calling EMS again when they need to go to the hospital."

In March, the Cincinnati Police Department announced it was using a new "differential response plan" during the pandemic.

"If there's an emergency situation, we will be there," Police Chief Eliot Isaac said.

But, Isaac indicated CPD officers may handle some reports over the phone, including non-injury auto accidents, certain thefts and breaking-and-entering incidents when the suspect is known to the victim.

Other local departments made changes that resulted in fewer in-person responses.

In April, Kenton County Animal Control had an 80% reduction in emergency calls for service, according to call data provided by Dan Matthew, Kenton County's Director of Emergency Communications.

"Of any other agency, animal control really changed how they operated because of the coronavirus," Matthew said.

Beckey Reiter, director of Kenton County Animal Services, said that agency has "reinvented" itself to reduce the risk of exposing employees and the public to the virus.

Instead of calls for services being routed to 911, Reiter said the agency's website and social media encouraged the public to call or email staff unless there was an emergency, like a vicious or injured animal.

"We're trying to not get people to call dispatch for general complaints," Reiter told the I-Team. "We were really worried about overwhelming our first responders and our 911 center."

"We take that information and we enter it into our CAD (computer-aided dispatch) system," Matthew said.

Matthew told the I-Team the addresses of COVID-19 patients appear as alerts in the 911 system when first responders are dispatched to those locations.

"We just simply let them know there's an alert on the address," Matthew said.

Matthew said 911 dispatchers also ask callers a series of questions attempting to establish if anyone at the location has tested positive for COVID-19 or is at a higher risk of carrying the virus.

The 911 centers in Hamilton and Kenton counties are cleaned and disinfected regularly, and employees are expected to practice social distancing and wear face masks, according to Knapp and Matthew.

Knapp and Matthew said none of their dispatchers have tested positive for COVID-19.

"We keep our people safe in order for us to be able to help everybody else," Matthew said.

Matthew said he and his wife, Renee, a nurse practitioner, both got sick in March.

Renee tested positive for COVID-19 and was hospitalized for a week, according to her husband.

Matthew said he stayed home in bed and followed a doctor's advice to treat his symptoms as if he had the disease, too.

"We got to experience the unfortunate nature of the pandemic and how it relates to health care and loved ones," Matthew said. "We weren't able to be there for one another at all. It was odd."

Knapp said the pandemic presents unique challenges for first responders who are continuing to find new ways to provide critical services as efficiently and safely as possible.

"I sleep a little bit better knowing that we have things on the horizon that are in the works that never were before."