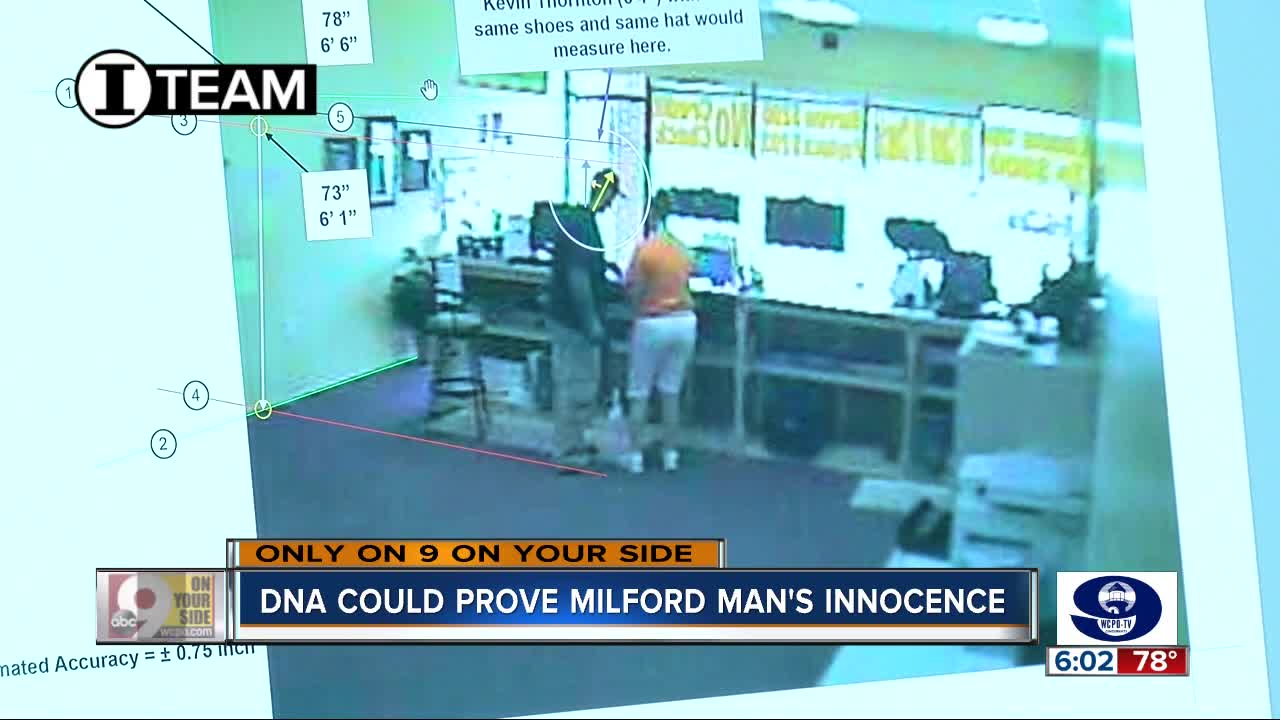 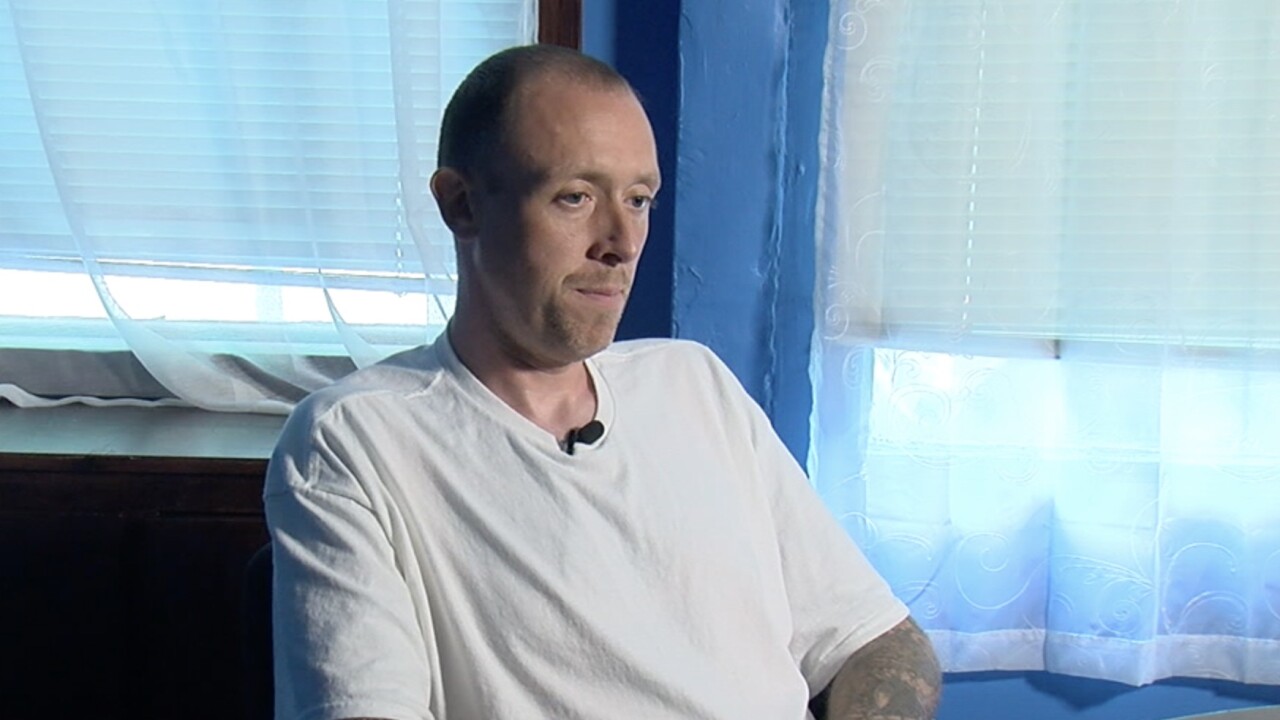 CINCINNATI — At 38, Kevin Thornton is trying to start a new life.

After serving 11 1/2 years in prison for a robbery he says he didn’t commit, he was transferred to an Over-the-Rhine halfway house in June.

The transition to freedom has been overwhelming.

For years he spent 20 hours a day in a cell, where he couldn’t extend his arms completely because the walls were only six feet wide.

"I just sat and thought about my life and stuff," Thornton said. "And how everything’s been took from me. I didn’t commit the crime I was charged with … it was unfair to me to be locked up and my freedom taken away.”

The Ohio Innocence Project at the University of Cincinnati Law School has been working to free Thornton for eight years. Attorneys say they’ve discovered scientific proof, including DNA evidence, that Thornton was not the man who robbed a Milford Cash Express store in 2007.

For years state judges have denied his appeals. Now he’s hoping his latest appeal, this time in U.S. District Court in Cincinnati, will finally clear his name.

"Kevin’s evidence, in my opinion, is very strong because Kevin’s case isn’t just about a witness recanting prior testimony," said his attorney, Donald Caster, who is a UC law professor. "Kevin’s case involves two different pieces of scientific evidence -- a video analysis and DNA evidence."

Nearly 10,000 inmates have written to the Ohio Innocence Project at UC asking for help since it was founded in 2003.

The project, which relies on the work of UC law students, has taken fewer than 50 cases to court and won exonerations in more than half of them, freeing 28 innocent people from Ohio prisons.

But Thornton's story hasn't yet ended in freedom.

On Sept. 11, 2007, a man wearing dark sunglasses and a baseball hat walked into a Cash Express store in a Main Street shopping plaza in Milford at 1:15 p.m.

The man walked up to the counter and asked a female employee about a loan. When she walked around the counter to give him a brochure, the man pointed a gun at her stomach and demanded money.

When she asked if he was serious, the man racked the slide on the gun, chambering a round and repeating his demand. She handed over her cash drawer.

The man ordered her to lie on the floor and bound her hands and feet with zip ties. He told her not to scream or he would come back. After hearing nothing, she freed her hands, cut the zip tie on her feet and hit the panic button, according to an Ohio Twelfth District Court of Appeals account of the crime in a written opinion.

What happened next would change Thornton’s life.

The clerk could only see the robber’s face “from the nose down.” So she had to cover the hair and eyes of the men in line-up photos before finally identifying Thornton as the robber, according to court documents.

A Milford detective then saw the grainy surveillance footage of the robbery on the local news and believed that he recognized Thornton.

Thornton was charged with aggravated robbery and kidnapping. His first trial in November 2007 ended with a hung jury. Eight jurors wanted to acquit and four were undecided, Thornton said.

A second trial was held in April 2008, but this time prosecutors had a new piece of evidence – an alleged confession. A man who Thornton knew from high school testified that he confessed to the crime to him.

"He was sitting there listening to my mom discuss (his case) with somebody," Thornton said about how he ran into the man in a probation office waiting room. "He was eavesdropping on the conversation."

"He was also waiting to see a probation officer and had warrants on him," Thornton said. "He took that story and twisted it around to try and get out of trouble."

A second jury convicted Thornton, and at age 27, he was sentenced to 12 years in prison.

"It crushed me," said Thornton, who had no prior criminal record except for a few traffic violations.

Thornton was taken to Lebanon Correctional Institute, where many of the state’s most violent offenders are housed. He had to learn prison rules quickly.

Other inmates stole his things. Sometimes he had good bunk mates in his small cell, and other times he had bullies who ordered him when to sleep, stand or watch TV.

He didn’t have any tattoos when he arrived in prison. But he quickly got them on his arms and torso in an effort to look tougher and blend in with the other inmates.

"I started writing letters to people to see if I could get help," Thornton said.

When the Ohio Innocence Project agreed to take his case in 2011, “It was like hitting the lottery,” he said.

The Innocence Project conducted a specialized DNA test on the zip ties that were used to bind the female store clerk during the robbery.

The DNA of one male was discovered on the zip ties. But it was not Thornton’s.

"DNA evidence for the courts is usually the gold standard," Caster said. "So we’ve been very surprised that given the strength of the evidence that we haven’t been successful in setting aside Kevin’s conviction."

He analyzed store surveillance video of the crime and determined that Thornton was too tall to be the real robber.

"I thought it was a slam dunk," Locke said, about the new evidence.

Clermont County Common Pleas Judge Jerry McBride, who had presided over both of Thornton’s trials, denied his appeal in 2012. He admitted the new evidence was compelling, but ruled that it should have been uncovered by the trial attorney and presented to the jury back then.

"It just rattles me to my core," Locke said. "It is gut-wrenching, heartbreaking work … because you get invested in these cases and you’re convinced, I mean you know in your heart this guy didn’t do it; he is innocent. And in most cases there is nothing you can do."

Once Thornton exhausted his state appeals, he turned to the federal court system in 2014 asking for a writ of habeas corpus. It is a last resort appeal.

So far he hasn’t fared well.

Because the U.S. Supreme Court has not recognized a free-standing actual innocence claim as a reason to overturn a conviction, Merz ruled that exonerating prisoners like Thornton “is beyond the authority” of federal courts in these cases.

The final decision is now up to U.S. District Court Judge Michael Barrett, who may rule on Thornton’s request for an evidentiary hearing in the coming weeks.

The Ohio Attorney General’s office, which is fighting to uphold the conviction, declined comment. But prosecutors dismissed the new evidence in recent court filings.

"The perpetrator was wearing gloves at the time of the offense, and this would account for the absence of (Thornton’s) DNA on the ties," Assistant Attorney General Mary Anne Reese wrote in a motion opposing an evidentiary hearing.

How does she explain the height difference?

The Cash Express worker testified at trial that Thornton was the man who robbed her.

"The store employee acknowledged that she couldn’t see the perpetrator’s whole face and in fact when she looked at photographs of suspects she had to put her fingers over the top half of every suspect’s face in order to decide whether or not it was the person that she wanted to identify," Caster said.

Merz Report in Thornton Case by paula christian on Scribd

As Thornton awaits the outcome of this last appeal, he is adjusting to life away from prison.

He looks forward going to Kings Island, driving a car, eating pizza, steak and ice cream. He hopes to find a job as a landscaper and travel to Florida to see the ocean for the first time in 22 years, where he will spread his mother’s ashes on the beach.

Thornton’s mother, Jacqueline Casey, died in April from a heart attack – three months before her son’s release from prison. She was his best friend, he said, and they spoke every day by phone while he was in prison. He never got to say goodbye to her.

"I came to the conclusion that I got to keep fighting for my mom now," Thornton said. "Not only myself but for her and her legacy."

After Thornton is released from the Talbert House in December, he will be on probation for five years and must register as a violent offender for the next 10 years. He worries this will hurt his chances of finding a job or a place to live.

"That’s the nightmare for us at the Ohio Innocence Project," Caster said. "These are the cases that keep you awake at night. The cases where we know our client is innocent and we’ve even been able to prove that our client is innocent but the judges say, nope there are procedural barriers that I can’t find a way around so the conviction stands."