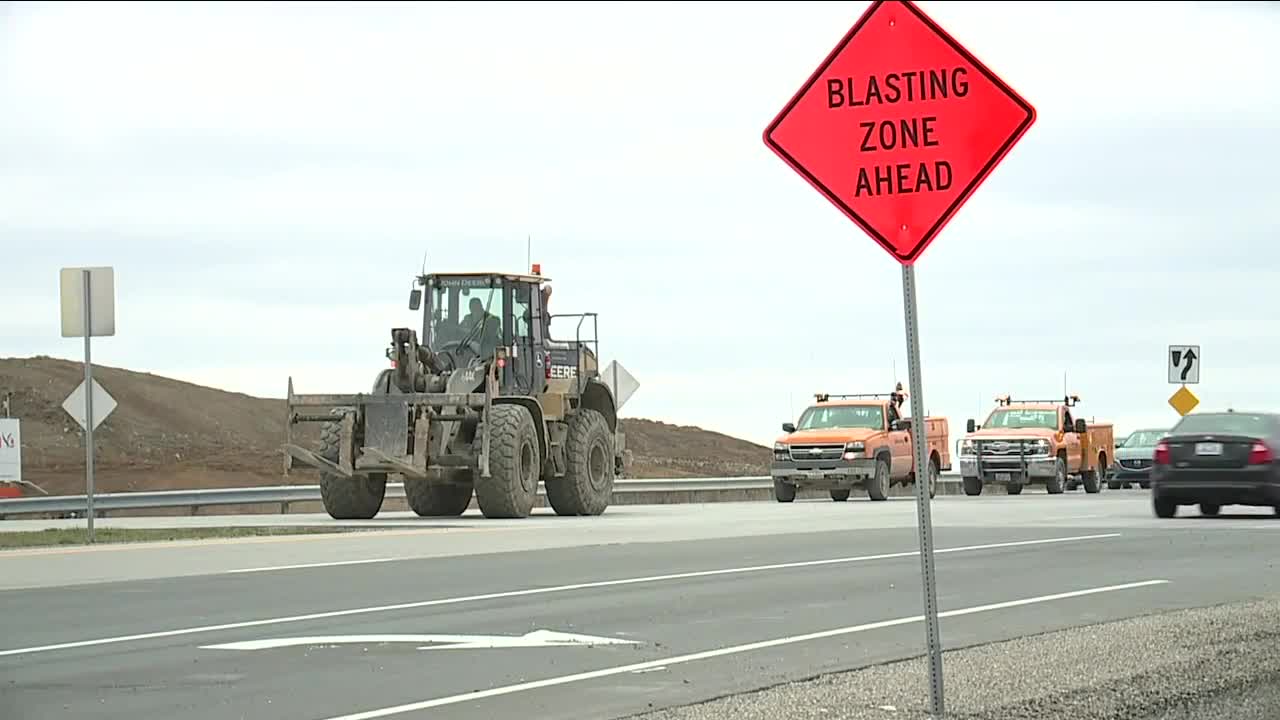 BURLINGTON, Ky. — A big boom has come for Boone County.

Unfortunately, it’s not one dozens of property owners were expecting.

"We don't even know if some of the damage that has occurred to the building can be repaired at the current condition it's in,” said Don Jones, president of A&B Heating and Air Conditioning on Commercial Drive.

His company sits a little more than 1,500 feet away from the blast zone located at the Amazon air hub near Cincinnati/Northern Kentucky International Airport. The blast zone is the area blasting permit holders are liable for when it comes to any damages.

"We started seeing damage in August of last year,” said Jones, who was quick to point out several large cracks in the building’s foundation, floor, and drywall. He believes blasting was heaviest from August through early November.

He says the worst part of it all was that he was given no notice that blasting was occurring. That’s because the Kentucky Energy & Environment Cabinet (EEC) has no requirement for blasting companies to give any sort of notice to anyone before they begin blasting.

The WCPO 9 I-Team put in an open-records request with the Kentucky Energy & Environment Cabinet in mid-February. We wanted to see all blast reports done by three blasting permit holders at the Amazon air hub site.

The purpose: to see if the blasting companies remained within the state’s blasting limits. One of those limits is for a blast’s Peak Particle Velocity (PPV) to be less than 2.0 inches per second.

What was returned? Seismic data collected from mid-November through early February, well after many property owners claimed damage. John Mura, with the Kentucky Energy & Environment Cabinet, says no seismographs were placed by the state before mid-November.

How many blasting reports did WCPO 9 receive? Zero.

"I'm surprised we can't see it. You know?” Jones said, "I think it’s only common sense that if someone is blasting in your backyard, you ought to be able to see the records to find out whether or not they’re within the state guidelines the way they’re set up."

What do blasting reports contain? According to the Kentucky EEC:

None of these records were included in the open records request.

What did we receive? Mostly inspections and citations. Thirteen of the 16 inspections were done after WCPO 9’s initial report in early February.

Here's what we found:

Feb. 6, 2020: The EEC initiated an investigation into Wampum Hardware Company. It found the company didn’t renew its permit to purchase explosives. The company blasted 22 times without having a permit. Fine: $1,000.

"If I get caught without a permit, I'm subject to fines. I'm subject to getting shut down. Yet you have large contractors who are blasting without permits. You tell me! How did this occur?” Jones asked.

Feb. 11, 2020: The EEC initiated an investigation into Hilltop Energy. It finds the company had "several blast records with incorrect information." The citation states the company noted the "incorrect blast location and incorrect holes per 8 millisecond delay." Fine: $250.

Feb. 12, 2020: The EEC inspects Wampum Hardware Company once again. They find seven records have the "incorrect blast location" noted on the inspection. They were corrected. Fine: $0.

The EEC inspects Trumbull Corporation’s blast logs. The state finds all blasting reports to be in compliance with state law dating back to August 14, 2019.

Boone County Judge/Executive Gary Moore says property owners began calling on a daily basis in late-September. "When I first heard about this, I had concerns that the complaints weren't taken seriously. So that's when we began to step in."

Moore requested Amazon turn over all blast reports. WCPO 9 put in another open-records request for those documents, and emails sent regarding issues at the Amazon air hub.

What we got back: seismic data from two of the three blasting permit holders. Trumbull Corporation’s blast logs were not included in the information given from Amazon.

"I wasn't aware that there was a third set of reports until today,” Judge/Executive Moore said, "I'm surprised that we don't have the other."

Moore says it shouldn’t have taken several months to get information in-hand.

"There should've been more monitoring, more data, sooner,” he added.

Jones tells WCPO 9 an Amazon representative has been by to see the damage on his property. He says that visit took place about three weeks ago, and he’s waiting to hear back from the representative.

"They have the responsibility to fix it. I'd think that Amazon would want to be a good neighbor,” Jones said.

Now, Boone County’s top official is calling on Amazon, one of the world’s largest companies, to step up to the plate.

"Where I think the indicator will be is how they'll deal with it from here. Now that they're aware, things are coming to light. How they'll respond and how they deal with the community will be imperative."

You can read the citations in the viewer below: