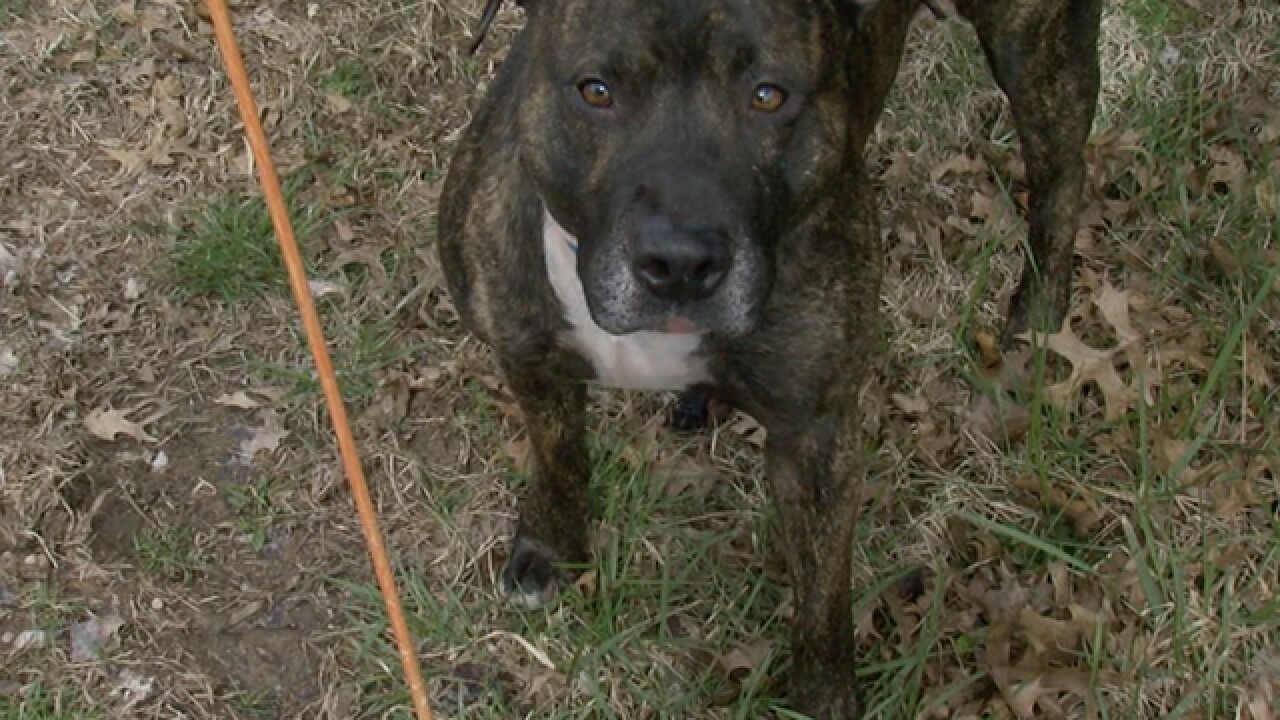 PIERCE TOWNSHIP, Ohio -- When Meagan Baldwin walks her dog, Ghost, she drives him out of the neighborhood.

"All of a sudden, he just grabbed onto his throat," Meagan Baldwin said. "...I was in tears, trembling, shaking, because I thought that the dog was going to kill my dog ... I was in hysterics, crying. I was so scared."

The 9 On Your Side I-Team found that that Boss' owner, Vonya Harrison, has been charged four times with failure to confine or restrain a dog in just the last 14 months. She was found guilty in three cases of failure to confine or restrain a dog, and she's paid $230 in fines and fees. Clermont County Dog Warden Curtis Bonhoff said it's rare for someone to repeatedly have the same issues.

"I don't think we've had a situation with anybody like this," he said. "It's been over a year now, and we keep facing the same issues over and over again."

In June, Ghost was playing on a deck with the Baldwins' friend, Kevin Murrison, when Boss ran up to them. Murrison said the dogs went after each other. Boss bit down hard on Ghost's neck, shaking him, leaving Ghost with 10 puncture wounds and a torn ear.

"The owner of the other dog finally showed up," Murrison said. "They ran over and she started beating the dog with a chair, and that was the only way to get him to unlock from the dog's mouth."

After that bloody attack, Bonhoff cited Harrison for having a "dangerous dog," a designation that would put more limits on Boss and make it easier to take him away from the Harrisons. But Judge Jesse Kramig dismissed the charge at the request of the Clermont County Prosecuting Attorney's Office because the dog warden's office didn't appear in court.

"I think there's the one occasion the dog needed to be deemed 'dangerous,' after biting the individual," Bonhoff said. "We needed to stay more on top of that."

The judge found Harrison guilty of failure to confine for the June incident. She paid a $25 fine plus court costs.

But Boss got loose again on Christmas day and bit Ghost again, according to the Baldwins.

Sarah Haevener's family lives next door to the Harrisons. She called the situation "ridiculous," saying something should have been done by now.

"I'm scared for my kids at home," she said. "The owners seem to not care at all."

Harrison admitted that Boss was "getting out probably once a week" when they first moved in. She said her family tethered Boss to a backyard tree, and he got loose. They put up a higher fence, but Boss still got out.

"At that point, I was doing everything I could do," Harrison said.

The I-Team interviewed the Harrisons three weeks ago. Vonya Harrison said she didn't realize how strong the breed is. Her son, Eric, insisted the dog is loving and obedient.

"We're sorry about what happened," he said. "But we're going to make sure he's always on a leash because we don't want to have him taken away."

But last week, Boss ran wild again. Harrison was again charged with failure to confine. She pleaded guilty, paid a $120 fine and still has Boss.

"The only thing that keeps happening is just tickets," Baldwin, Ghost's owner, said.

Another court hearing is scheduled for April 12 to determine if Boss should be declared a "dangerous dog." Under Ohio law, a dog can be identified as "dangerous" if the owner is convicted at least three times of failure to confine, or if the dog bites and injures a person. Boss meets those qualifications.

For now, Boss will continue living with the Harrisons. But if he's declared "dangerous" and gets loose again, the Harrisons may lose him for good.

"I think the dog should be removed and placed in a home where it can be contained," Baldwin said. "It's just gone on for way too long."