I-Team analysis: Nearly all protesters arrested in Cincinnati are from the Greater Cincinnati Area

90% of charges are curfew violations 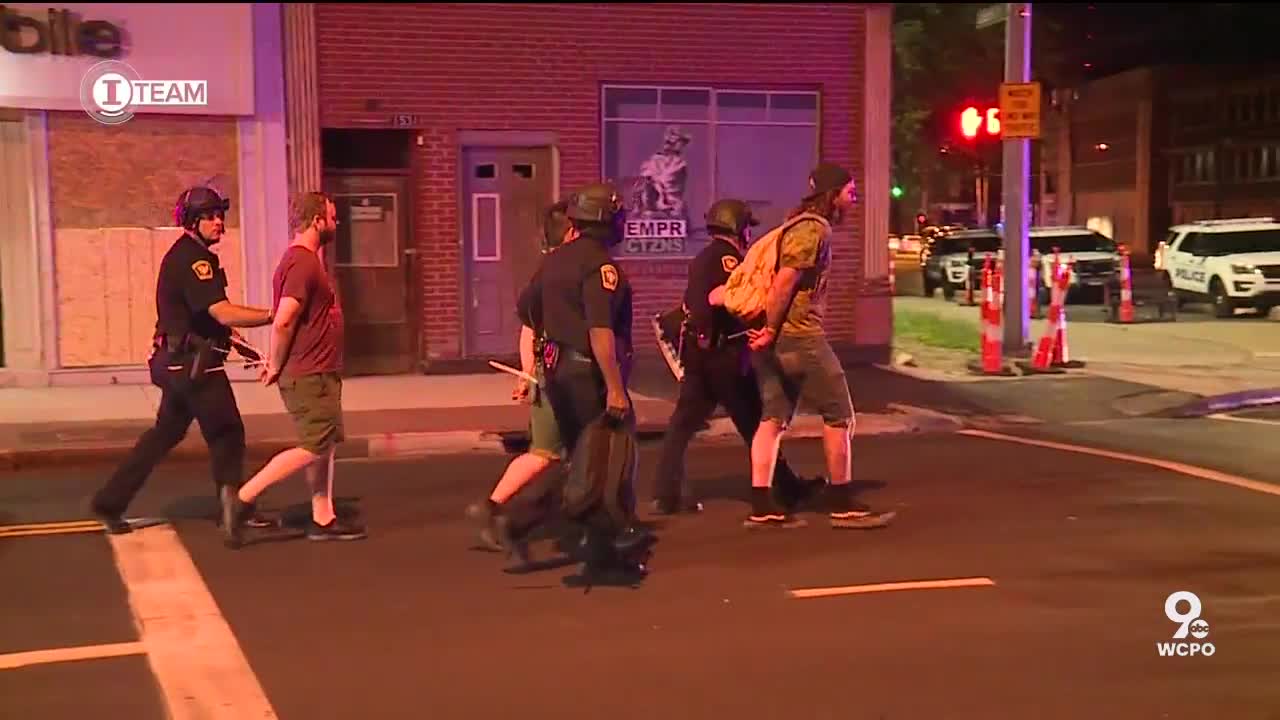 The I-Team examined 350 arrest records from people arrested during recent protests; records show the all of them are from the Greater Cincinnati Area.

CINCINNATI — Nature Brooks said she witnessed police brutality when she was a 9-year-old living in Cincinnati.

Now, a 22-year-old student at Wright State University, Brooks, an African-American, said that memory and the desire to fight for "people who look like me" has inspired her to join thousands of others protesting police brutality in the Cincinnati metro area. ​

​"It's really important to me," Brooks told the WCPO 9 I-Team. "I'm fighting for my children. My children's children." ​

​Police estimate more than 10,000 people have protested in Cincinnati during the past 10 days. ​

​Protesters have held dozens of peaceful protests throughout the region since May 30.​

​But there have also been hundreds of arrests in Cincinnati. ​

​"I believe my first amendment rights have been violated. The right to peaceful protest," Brooks said. ​

​Chief Isaac said he supports peaceful protest, but on June 1 he insisted protesters must comply with the curfew order.​

​"This curfew didn't happen because everything was going great," Isaac said. "We had to do this because of the amount of damage. We have over 100 businesses that have been damaged, looted, shots fired into them."​

​What the criminal cases show​

​The WCPO 9 I-Team found 350 criminal cases filed against people who participated in protests from May 30 - June 2, according to public records with Hamilton County Clerk of Courts.

The demographic information of arrests captures a snapshot of who participated in the protests, and where they are from.

​Our investigation began with an online search for cases on the Hamilton County Clerk of Courts website filed by the criminal code for misconduct at an emergency, which is the code officers used for curfew violations.

We examined the charging documents for each case to determine if the arrests were connected to the protests or curfew violations.​

​Court records show about 90% of those criminal charges were for violating the City of Cincinnati's curfew. ​

​The I-Team found several protesters had been charged with arson for setting fires in dumpsters. ​

​Prosecutors allege a group of more than four people threw bricks at a police vehicle while an officer was inside the car. ​

​According to the criminal complaint, at least one brick smashed the windshield. One man is charged in the incident.​

​The I-Team did not find criminal charges filed against anyone for allegedly firing shots at police.​

​The I-Team asked the Cincinnati Police about records for the 163 cases that would bring the total of cases to 513 as announced by Chief Isaac. ​

​CPD has not responded to our questions, and "respectfully declined" an interview with the chief.

The I-Team also asked the court clerk's office about the difference in the number of cases. ​

​David Daugherty, spokesman for the sheriff's office, said it's possible the 163 cases were arrests in the form of citations on the street, and those people were never brought to jail. ​He said CPD would know that information.

Daugherty said also sometimes it takes a while for paperwork to get caught up.

He said the sheriff's office database shows 407 total arrests involving protesters between May 29 and June 4, and that most of those are related to violating curfew.

​​Froelicher, who is white, is charged with disorderly conduct and obstructing official business for allegedly throwing plastic water bottles at officers, then running away. ​

​"I was never engaged with police officers at all," Froelicher told the I-Team. "We tried to get away from the police."​

​Froelicher and Nature Brooks reflect the diversity the I-Team discovered in the court cases we reviewed. ​​

​​The I-Team used the data to create maps showing protesters traveled from all parts of the metro area to protest in Cincinnati. ​

​One out of every five city residents arrested during protests live in the South Cumminsville neighborhood on Cincinnati's West Side. ​

​Police also arrested dozens of protesters who live in the suburbs.​

​​In all, 98% of those police arrested live in the Greater Cincinnati Area. ​​

​​The I-Team's research found they are also a diverse group.​

​
The I-Team asked Cincinnati Mayor John Cranley for an interview about results of our investigation into the demographic data of people arrested during the protests. ​

Cranley's office declined the request due to scheduling issues. His chief of staff said they will send a statement. We will update this story when we receive it.​

"Before it could always be a black thing, but now it's more than a black thing," said Charles Jones, an Africana Studies Professor at the University of Cincinnati.​

Jones said the diversity of protesters will help them accomplish their goals. ​​

"Diversity is so important, because it shows the degree of support," Jones said. ​

Professor Jones told the I-Team it's also important that public officials not blame "outside agitators" for the unrest. ​​

"If you can put it on an outside agitator, then that is saying on the local level everything is okay. But we know that everything is not okay, because you have people speaking out against that." Jones said. ​

Howard Froelicher and Nature Brooks are more committed than ever to confronting police brutality, bringing critical resources back into under-served communities and keeping their voices in a movement that has spread across the world. ​​