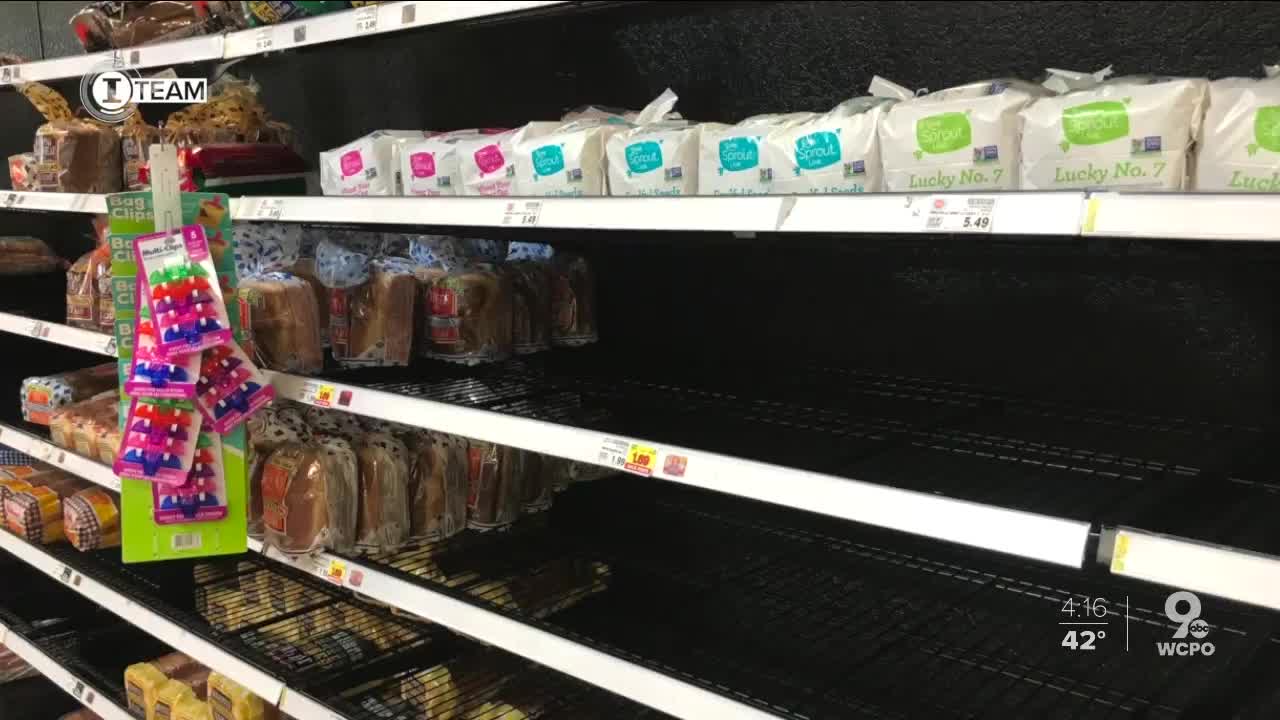 Hundreds of Ohioans and thousands of Kentucky residents have filed complaints about price gouging both in stores and online over the past month.

CINCINNATI — Hundreds of Ohioans and thousands of Kentucky residents have filed complaints about price gouging both in stores and online over the past month since the coronavirus pandemic hit the Tri-State.

The complaints come by phone or online into each state’s attorney general’s office about the abnormally high prices for household staples such as eggs and ground beef, or the most sought-after products since the pandemic started: toilet paper, hand sanitizer, face masks, thermometers and protective gloves.

“They are price gouging a lot of their merchandise and it needs to stop. An 18-pack of eggs for $5.25. Bread is over $3 and it shouldn’t be that high. It never was until this virus came along,” a buyer wrote in a complaint to Ohio Attorney General Dave Yost’s office about a small grocery store in East Liverpool.

But enforcement is difficult in a state that lacks a specific price gouging law. While Ohio law bans unconscionable sales practices, it does not define what that means as it relates to price gouging.

“We need a law that can tell the difference between someone who’s price gouging and somebody who’s reacting to normal price pressures of the market,” Yost said.

Yost’s office drafted a bill that is now in the hands of the Ohio General Assembly. He is optimistic about its chances of passage once the legislature reconvenes.

The bill would limit the number of critical goods that one person can buy at a time during an emergency.

“The reason that’s important is these shortages occurred because people go in and buy two years' worth of toilet paper or buy a hundred masks that they don’t need,” Yost said.

The proposed law would also define unconscionable sales practices as the dramatic increase of prices over their historic norm. Sellers could defend the high prices by showing there was proper reason for it.

“So what we’re really going after isn’t the person who is passing along costs or recognizing that demand is high,” Yost said. “The law of supply and demand can’t be repealed. But what we can do is stop people – predators – from holding these goods hostage.”

In the past month Ohioans complained to Yost about prices that had been doubled and sometimes tripled by stores – big chain grocery stores and pharmacies, small mom-and-pop stores, convenience stores, hardware stores and gas stations. They also complained about deceptive sales at online sales platforms over hard-to-find items such as N95 masks.

The product that yielded the most price gouging complaints: toilet paper. As of last week, Yost’s office had received dozens of complaints specifically related to toilet paper prices.

“A 6-pack of toilet paper they are selling for $13.99. This is not right. In the times of need with this coronavirus happening, people are losing their jobs and they are tripling the cost of toilet paper!!!!!!!” according to a complaint filed with Yost’s office against a Jefferson hardware store.

What penalties exist in Ohio?

“Potentially, under the Consumer Sales Practices Act, we can get damages, we can sue them civilly,” Yost said. “In situations with outright fraud, then criminal law could be applied and we could refer that to prosecutors like Hamilton County Prosecutor Joe Deters and ask them to pursue it.”

Across the river, Kentucky Attorney General Daniel Cameron is receiving many of the same types of complaints – but he’s received more than four times as many as Yost.

As of last week, Cameron’s office had received 2,432 consumer complaints about price gouging since March 7. The number of complaints last year was zero, in part because Kentucky's price-gouging law wasn't triggered until March 7, when Gov. Andy Beshear declared a state of emergency. It bans sellers from charging prices that are “grossly in excess” of what they charged before the pandemic.

“In this last couple of weeks in working with Amazon, there were some third-party sellers who were using Amazon’s platform to price gouge. So we served six subpoenas, cease-and-desist orders on those third-party sellers to tell them to stop that type of behavior,” Cameron said in an interview with WCPO last week.

“As soon as we find out that a behavior ... in my judgment is harmful to Kentuckians, we’re doing everything we possibly can to shut it down,” Cameron said.

Sellers can face a $5,000 fine for a first offense of price gouging in Kentucky, which can increase to $25,000 for multiple offenses.

“We’ve got to be firing on all cylinders and be working very very hard to be the watchman at the gate,” said Cameron, whose office is also investigating roughly 100 scams related to the coronavirus.

“There’s a lot of COVID-19 scams where somebody who is masquerading as a member of the Centers for Disease Control or Small Business Administration or someone who claims to be connected to a charity. These are all things we are seeing across Kentucky,” Cameron said.

Last week Cameron’s office shut down two fraudulent COVID-19 pop-up testing sites in Louisville. The office also worked with Tennessee authorities to track down two brothers who had purchased gloves, sanitizing wipes and other items in Kentucky with the intent to resell them at a much higher price out of state.

“They relinquished their possessions and we were able to donate back into the KY community,” Cameron said.

Yost is also warning Ohioans about products that claim to be cures for the virus.

“We’ve got all kinds of reports of things going on, people trying to hustle a buck off the COVID crisis,” Yost said. “Look, there is no cure. There is no vaccine. There aren’t any creams or lozenges or anything else, and if somebody is trying to sell you that stuff, first of all don’t buy it, second of all let us know about it, because we are actively investigating these cases.”