Former militia member: 'All they wanted to do was shoot guns' 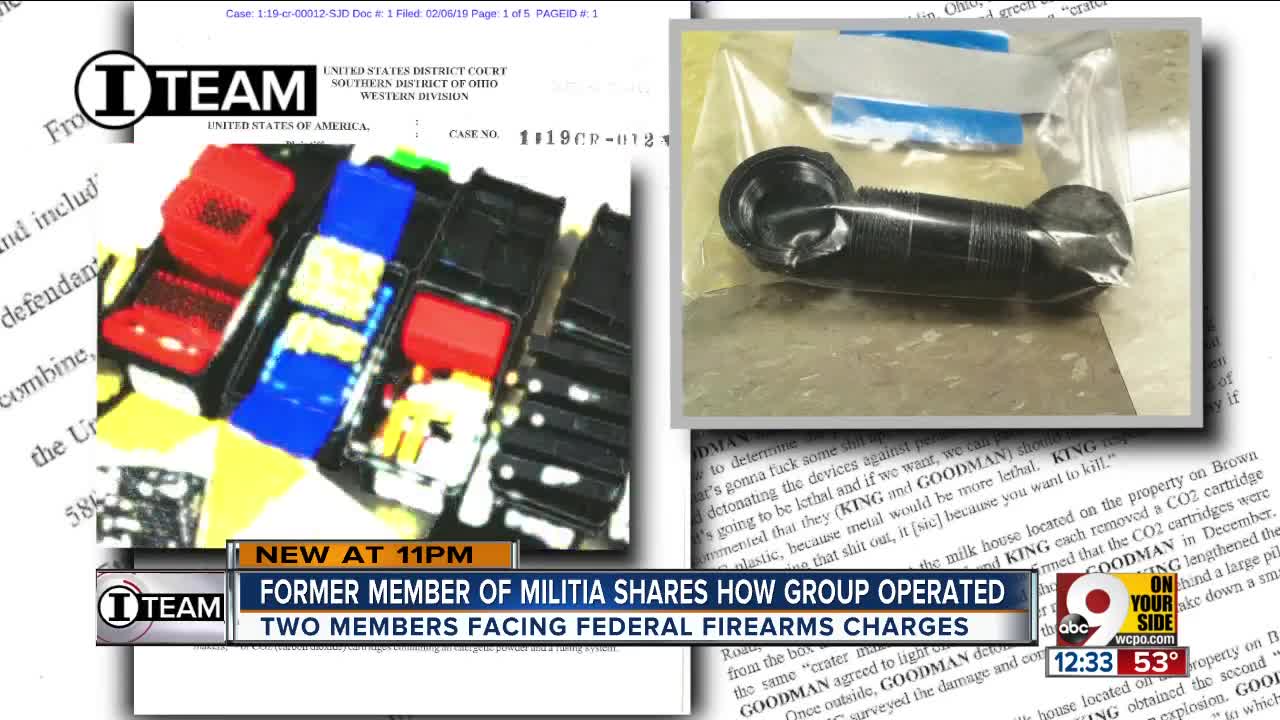 To Don Whisman and other members of the United Sheepdogs of Ohio, who say they never became involved with illegal explosives, the demise of their militia 'family' still hurts. "They pretty much destroyed the word militia," Whisman said. "It's sad to me."

Don Whisman's radio call on May 25, 2018 alerted members of the United Sheepdogs of Ohio militia group that he had arrived for training exercises.

"Getting ready to pull in," Whisman said.

"You've got permission to come in," replied a voice on the radio.

Like all militia members that weekend, Whisman said he had been assigned a one-hour shift of guard duty. Whisman said his partner on patrol was Ryan King.

"We had to walk the property making sure nobody got us, like we were guarding a fort or something," Whisman said.

According to Whisman, the two men carried their 9 mm handguns, AR-15 semi-automatic rifles, and clips packed with 30 rounds of live ammunition.

"It was a clear night. Real quiet. We walked up the driveway and along the fence line," Whisman said. "I leaned on the fence mostly."

Whisman said he didn't like King, who Whisman described as "cocky" and "always talking about his new toys, his weapons. I was more about prepping and survival. All they wanted to do was shoot guns and stuff."

A few weeks after that 2018 holiday weekend retreat, Don Whisman quit the United Sheepdogs of Ohio.

Seven months later, in February of this year, a federal grand jury indicted King and Goodman on charges of conspiracy and possession of unregistered explosives. During the federal investigation, court records reveal agents obtained recordings of the two militia members allegedly conspiring to build and detonate illegal explosives.

Whisman said he, and other militia members, were stunned.

"We all thought, 'Hey, have these guys lost their minds?'" Whisman said. "'What happened to these guys?'"

King and Goodman have been detained in the Butler County jail since their arrests in February.

Militias are well known for their secrecy. But Whisman and other former Sheepdogs agreed to provide the WCPO I-Team with the first detailed insider account of the militia's operation.

In the fall of 2017, Whisman, weakened by cancer and chemo treatments, had little feeling left in his feet.

He was also bored out of his mind.

It's not the life Whisman expected. As a construction supervisor, Whisman said he had earned a good living, but after his bout with cancer, he had been unable to keep his job.

One of his best friends had joined the United Sheepdogs of Ohio. Whisman decided to join, too.
"I was very proud when I first joined this group," Whisman said. "To me it was patriotic. When I think of militias, I think of the Revolutionary War."

Whisman's close friend, who joined the group first, agreed to talk with us if we didn't identify him by name.

Like Whisman, he also wanted to learn more about preserving meat, and how to survive without electricity or fresh water. Not how to win a fight.

"It didn't scare me, but it wasn't what I expected," Whisman's friend, a military veteran, said. "If it gets down to hand to hand combat, I'm going to hand a knife to the other guy and say 'get it over quick.'"

Whisman said the militia had a dozen members. Half of them lived within a mile of his home in Franklin. Whisman's son-in-law also became a Sheepdog.

In order to join the militia, Whisman said he was required to buy an AR-15 semi-automatic rifle, a 9mm handgun, at least 1,000 rounds of ammunition and a certain number of magazines that hold up to 30 rounds each.

"I guess they thought we were going to be invaded by some other country," he replied.

In February, federal agents executed search warrants at Ryan King's home in Franklin and on the Goodman family farm in Ripley. The agents found thousands of rounds of ammunition and semi-automatic rifles. In a motion filed in the federal weapons case against King and Goodman, King's attorney said all of King's weapons and ammunition were legally purchased, and have been sold.

In addition to guns and ammunition, Whisman told the I-Team members of the Sheepdogs were required to own camouflage clothing and programmable portable radios. The radios were considered a primary form of communication. Militia members received a two page printout of the different channels first responders used.

WCPO has left several messages for Coots and his wife, but they have not responded to our requests for comment.

Whisman insisted he joined the Sheepdogs to try to be better prepared for a doomsday, so he could protect his family and help his community.

Instead, Whisman said he learned some militia members are planning on ways to exploit any anarchy for their own protection.

"There's literally people out here training today to take what you have in case something does happen in this country," Whisman said.

The federal indictment alleges King and Goodman were on the militia group's 'Special Projects Team,' which focused on how to "construct, use and stockpile destructive devices."

Based on evidence provided by federal agents and prosecutors, the grand jury determined that King and Goodman blew up an illegal homemade explosive on Goodman's property, conspired to build powerful pipe bombs called "crater makers," and discussed how to make them more deadly.

The indictment provides a detailed list of events that the grand jury believed justified criminal charges against the two former Sheepdogs, including the following alleged incidents:

During a Christmas party at King's home last December, King and Goodman allegedly discussed where to place a car bomb for a bigger impact.

"This could go under a front seat of a car very easily, engine of a car, wired into the breaking," King told Goodman, according to the indictment.

In January, King and Goodman talked about pressure cooker bombs like the ones used at the Boston Marathon in 2013. Those explosives killed three and injured nearly 300.

"I want to focus on making these anti-personnel," King said. "I think these will be a lot more useful to us. We can build land mines. I've already built them before, you know that."

"I'm going to make some of them crater makers," Goodman replied. "I Like that."

The indictment claims King and Goodman blew up a homemade explosive that day.

The attorneys representing King and Goodman declined to comment on the case.

United States Attorney Ben Glassman is personally prosecuting the case. According to Glassman's spokesperson, Jennifer Thornton, the U.S. Attorney prosecutes only a half-dozen or so cases every year.

"I'm not trying to take up for these guys or anything, but I don't think they would've hurt anybody," Whisman said.

Whisman said he believes King and Goodman were probably just talking tough and trying to impress each other.

"Honestly, I think they just wanted to build these things and blow them up on Randy's farm," he said.

Are militia's a threat?

Mark Pitcavage has been tracking militias for more than 30 years.

"It's an extremist movement that we take very seriously," Picavage told WCPO during an interview at his Dublin office on Wednesday.

Pitcavage, a senior researcher at the Anti-Defamation League's Center for Extremism, said most militias are driven by their resentment of big government, and their fear of losing their right to bear arms. But, Pitcavage believes militias tend to attract right-wing extremists who are more likely to stockpile and use weapons, ammo and dangerous explosives.

"The movement as a whole has this proven track record of criminal activity and violence," Pitcavage said.

The criminal conduct of some militias and their sympathizers is well-documented.

On April 19, 1995, Timothy McVeigh and Terry Nichols set off a truck bomb close to the Alfred P. Murrah Federal Building in Oklahoma City. The blast killed 168 people, including 19 children. McVeigh and Nichols were linked to armed anti-government militia groups.

Since then, the Southern Poverty Law Center and the ADL have focused on the practices and impact of militias, including groups in Ohio, Kentucky and Indiana.

Pitcavage, and other researchers, say the militia movement took off a decade ago during the Great Recession. The policies of President Barack Obama sparked fears among many gun rights supporters that the federal government might come and get their guns, he said.

"The militia movement is really fixated on guns," Pitcavage said.

Even though Pitcavage believes many militia members will never be involved in criminal activity, he insists the movement should get special attention. But, that opinion isn't shared by Franklin Police Chief Russ Whitman, who hadn't heard any concerns about the Sheepdogs militia until federal agents contacted him in February.

"There's always going to be a small percentage of people that don't represent everyone. If they're forming a militia to help more power to them," Whitman said.

But, to Whisman and other former Sheepdogs, who insist they didn't get involved with illegal explosives, the demise of their militia 'family' still hurts.

"They pretty much destroyed the word militia," Whisman said. "It's sad to me."