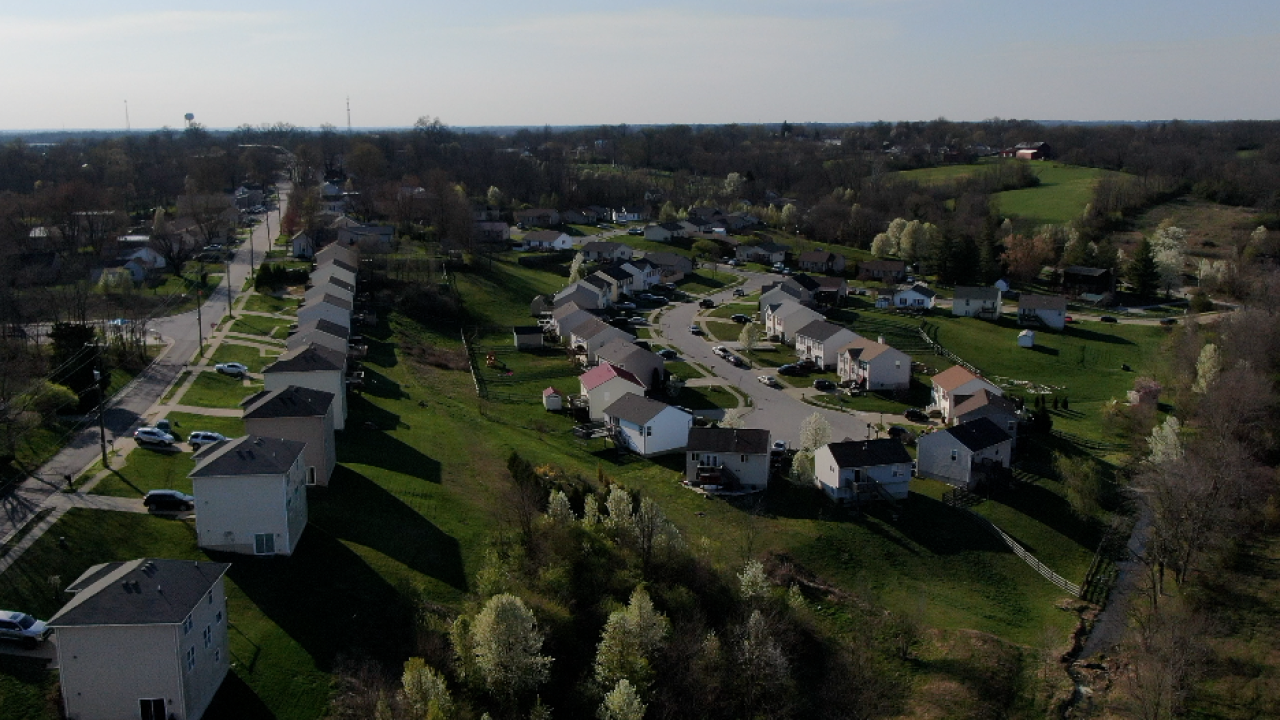 WALTON, Ky. — Word that a construction zone at an industrial park in Walton, Kentucky had set off explosives that exceeded state limits didn’t come as a surprise to nearby homeowners.

“Not at all,” Edna Harrison told the WCPO 9 I-Team. "I’m surprised that they only found a couple of discrepancies.”

Her home, on Showalter Trace, sits within eyesight of the Logistics Park 75 industrial park on the Mary Grubbs Highway. The construction site at the industrial park has a 350-feet blast radius allowance; Harrison’s home is roughly 2,000 feet away from the site, far from the allowance legally provided for the blast zone.

According to the Kentucky Energy & Environment Cabinet (EEC), no pre-blast inspections are required by the state agency to inform property owners within, or outside of, the blast zone before blasting begins.

A brand new regulation, put into effect April 1, now mandates blasting companies must notify the state agency within 24 hours of each blast.

“Very frustrating," Michael Willen said. "We live five to six houses from it. My kids are playing outside, and they’re setting off explosives.”

Willen said he was never warned of the possibility of blasting over the past two years, and he was only notified when he discovered the property was set for a zoning change.

On Monday, he showed several cracks in his home’s foundation and driveway, which he believes were caused because of the nearby explosions.

“A lot of the valley channels that energy straight up to your house,” he said. "We should’ve all had a seismic monitor to figure out how strong a blast was at our residence.”

Willen said a group of homeowners near the site hired an attorney in 2018 to dig up information on the site, but it wasn't easy.

“The records were hard to get," Willen said. "Information was kept quiet. Swept under the rug. Even with an attorney requesting it. We had no information."

According to WCPO's open records request through the Kentucky EEC, no investigations took place at the site until Feb. 6, 2020, two days after WCPO's initial report. The state isn't required to inspect construction sites, but often does so periodically.

The I-Team has reported on another site near CVG at the Amazon Air Hub over the past two months. The Walton industrial park site is located in southern Boone County, and involves different blasting companies.

The Kentucky EEC's John Mura tells WCPO's I-Team that blasting reports are not public record, and that they are the property of the individual blasting company. However, the state agency does view the documents to ensure compliance.

“When they read the reports, we were told the damage found on the homes when they were inspected,” Mura said. "It was all attributed to ground shifting. I look at it like, ground shifts when you blast.”

On March 2, one of the blasting companies was cited for several offenses from 2019 to 2020.

Kentucky officials also found that the records on Nov. 14, 2019 and Jan. 20, 2020 failed to properly identify the blast location. That investigation concluded all 24 blast reports from the company failed to have a required blaster signature.

It also found the company exceeded the state’s regulated airblast limits of 133 decibels on two separate occasions. A blast on Nov. 11 registered 142 decibels, and a blast on December 10 registered 135 decibels.

The fine for incomplete blast records and exceeding the state’s limits multiple times is $1,200.

The WCPO I-Team has requested more information from the Kentucky EEC regarding the second blasting company on-site beginning in 2018.

Harrison said she moved to her neighborhood more than a decade ago to get away from the city life.

“I always said, wherever I move a backhoe backs up and follows me," she said. "This time it was dynamite.”

She believes blasting is to blame for thousands of dollars in damages to her home. Inside her home she has large cracks in the ceiling and drywall near two bedrooms; outside, part of her roof was damaged dating back to January.

"When the blasting was going on, at least once a week it would be a horrible blast. For them to try to minimize it is what they’ve done,” Harrison said. “That’s wrong.”

Phase one of construction is complete at the Logistics Park 75 industrial park, but more phases are set to be completed over the upcoming years.

As for what Willen would tell property owners around the state if they see a large construction site with blasting happening near their property?

“Buckle up. Because it’s going to get crazy,” Willen said.